I hope you enjoy the following journey to the Third Horizon  and the fairy tales of 1001 nights as much as I do. Bon voyage! 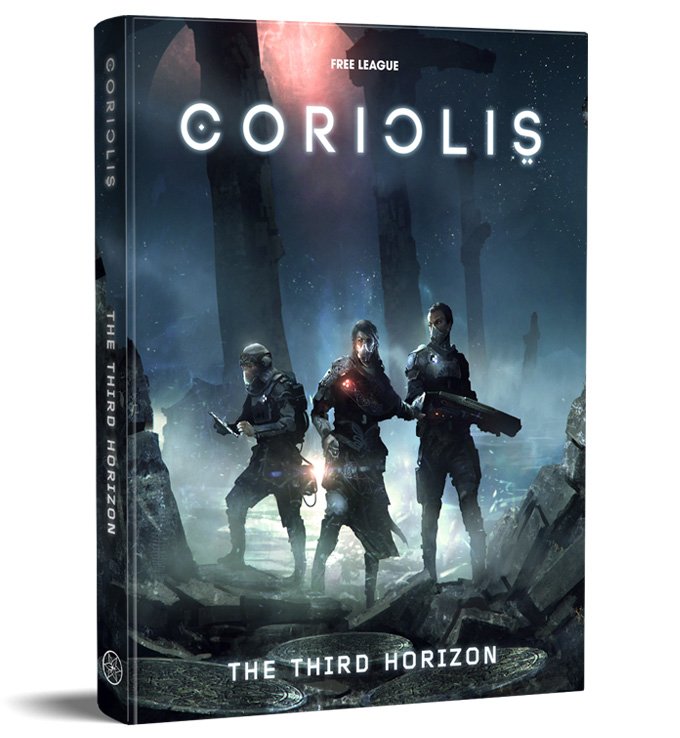 Coriolis has starships, portals, beam weapons but also janissaries, djinni and wandering prophets. It has desert kasbahs with bio-engineered camels and floating anti-grav palaces with emirs carried in litters by their human servants. It mixes the fantastic sense of wonder from science fiction with the fantasy of fairy tales.

The second aspect are the Icons, gods that actually listen to your prayers (more on that later) much like the pantheon from fantasy stories, but with faces that fit the culture and sci-fi setting of Coriolis. For example, the Icon that serves as protector of all starship crews is often portrayed like a tired boy holding a switch key. The Icons antithesis is the Dark between the Stars, a primordial force without angle or vector, which feeds and influences the people of The Third Horizon.

The third aspect, that welds together the other two, are the rules! 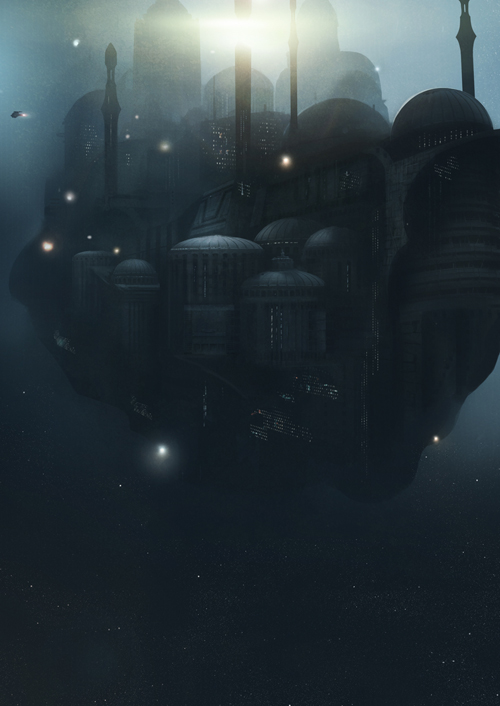 Coriolis is system-wise based on Mutant: Year Zero. What are the major changes or additions?
The most obvious change from Mutant: Year Zero is that you don’t suffer trauma by pushing dice rolls. That degenerating mechanic makes perfect sense in a postapocalyptic setting, but Coriolis has a less bleak tone. Instead of pushing dice rolls, you can pray to the Icons. Praying will give you a reroll (just like pushing) – but not without cost. Each reroll also gives the GM a Darkness Point, which she can use for a range of adverse effects later on in the session. Additionally, in Coriolis you don’t suffer trauma directly to your stats as in MYZ, so you will always roll with your full attribute scores. Instead you have hit points and stress points to handle trauma.

The second big change is the replacement of the Ark with the Spaceship. All groups start with their own starship which they customize as they create their group and characters. Later in the game there are plenty of ways to modify the spaceship with different modules (new features) and options (modifiers to modules). The spaceship is of course coupled to a new innovative spaceship combat system where all positions from the captain to the technician are important and let all players contribute to the mayhem of space combat. Teamwork is all! 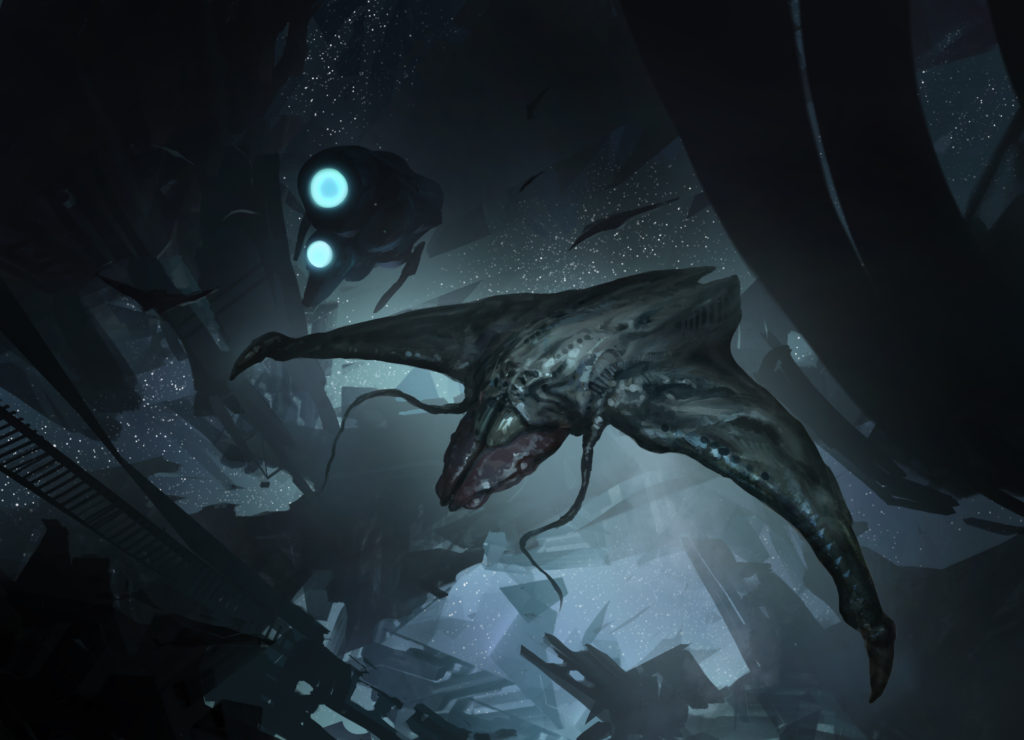 As there are no mutations in Coriolis – The Third Horizon, the characters get their edge from talents and gear. Some of the more potent talents and gear feed the Dark between the Stars with Darkness points, which the Game Master can use right away to hinder the characters or affect their fortunes later. Praying to the Icons, using artefacts from the long lost progenitors or travelling far from the well-used space routes also gives the Game Master Darkness points. 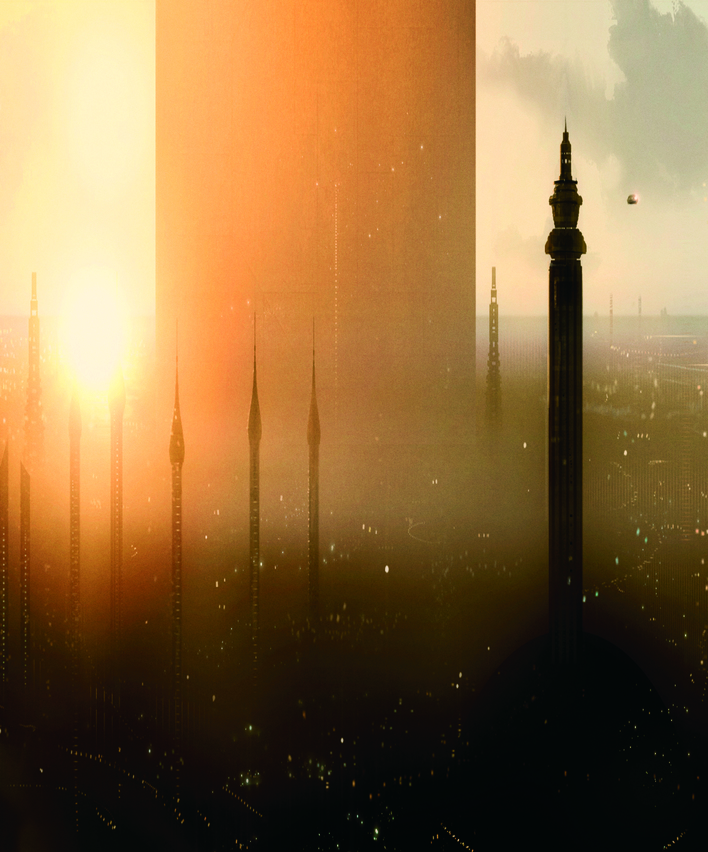 What is the idea behind the „Coriolis: prayer to the Icons” mechanic and the surprising combination of religion and science fiction?
In Coriolis, the gods exist as the Icons that people worship and pray to. To not “believe” in the Icons is problematic, at least if you’re open about it. Nobody would want to have an unbeliever on their spaceship voyage or a trek through the wilderness, or actually working in your shop.

We wanted the Icons to mean something in the game, that a small prayer should give your character a tangible effect – thus the prayer to the Icons mechanic. When you pray to an Icon, and preferably your own Icon you get to reroll dice to get more successes. But it comes at a cost. Each prayer increases the Darkness points available to the Game Master. The universe seeks an equilibrium and as soon as the Icon grant your prayer, the Darkness between the Stars increases.

People will probably ask “What are the Icons?” – are there really gods in the setting? The easy answer is yes, to the people of the Horizon they are real. What their true form and purpose are is not as easily explained. For ordinary people as well as the player characters it is a very palpable effect when prayers lead to better success. 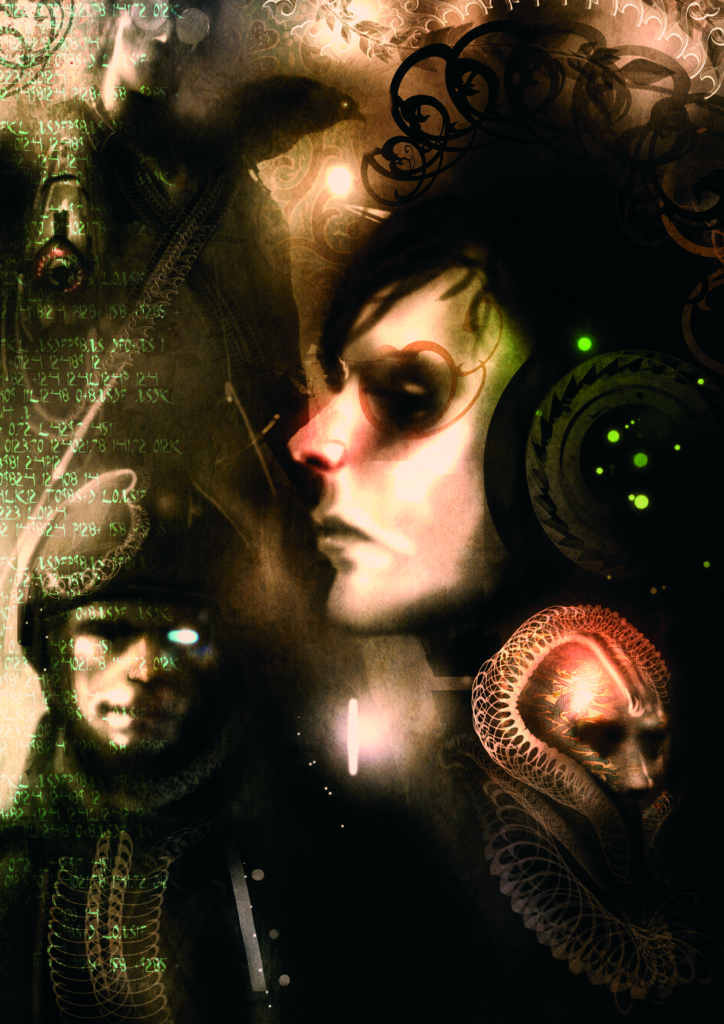 A representative Coriolis group consists what types of characters and what makes them interesting. Which cool classes, races, powers, etc. can players expect?
In Coriolis, the central concept of an adventuring group means something. The first thing you actually do, before you create your character, is to decide what kind of group you’re going to play. You can be free traders ferrying goods along the space lanes, mercenaries seeking out conflicts on small forest moons or patroling the bazars of Coriolis, explorers seeking artefacts in ancient ruins deep in asteroid clouds, agents manipulating the powers of the Horizon through shifty deals or sabotage, or why not pilgrims travelling between monasteries and Icon temples of the Horizon in search of absolution.

Your group gets a spaceship, which the players design together, and your own group talent which can be used by everybody in the group. To help you create adventures you also choose a patron and/or nemesis.

When this is done you actually start on creating your character – every group has suggestions for character concepts. You can be everything from the conventional mercenary or fighter pilot to a poet, space nomad or prophet. The Third Horizon is almost limitless in what you can become as a concept. Each concept has suggested talents and gear, so the character creation process is smooth and fast.

As for races, you only play humans in Coriolis, no actual extraterrestrials exist (or do they?). There are some hominid so-called semi-intelligences, such as the wolf-like nekatra or lemur-like ekilibri, that are playable but with some constraints as most people in the Horizon view them as smart animals.

In Coriolis, the characters get their powers through talents and gear. The most powerful talents are the ones bestowed by the Icons, which you randomly get at character creation. In the fiction they are the star signs you are born in, much like the zodiac, although in Coriolis the Icons occupy the skies instead of twins, rams and the likes. You also get a group talent and personal talent. All except the Icon talent can also  be learned through experience. 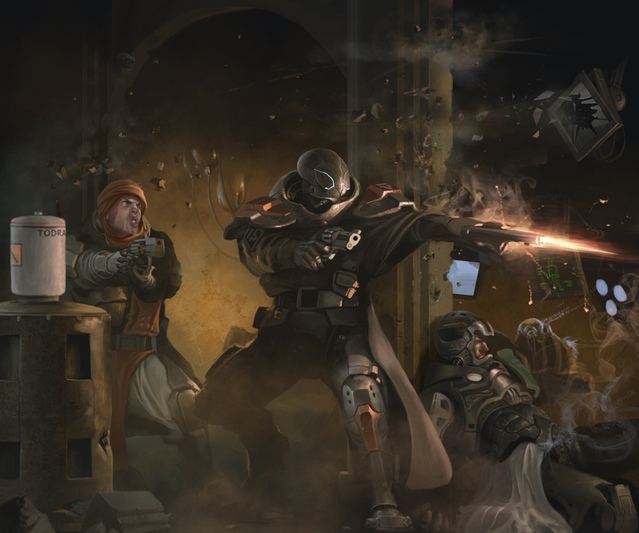 What are typical stories that players will tell? Which kind of threats will they likely have to oppose?
The typical story would be a mystery of sorts, requiring both social interactions, some action and visits to exotic planets, asteroids or other milieus associated to pulpy adventures. The way I myself would play Coriolis would be some sort of adventure with weird prophets, far away asteroid caves full of ruins and technological constructs or ancient efreets as threats. Spice it up with Zenithian janissaries, treacherous agents, unimaginable artefacts and magnificent vistas from three-moon eclipses, meteor rains or distant comet temples. If you like more action, you can choose to play mercenaries or more travel, why not as crew of a flying circus!

Threats in Coriolis can be both mundane and mysterious. The mundane could be opposing agents, mercs, or palace guards – although with exciting gear as thermal carbines, mercurium sabres and in some cases specific talents as Sword Whirl or Nazareem’s Weil. But the really cool stuff are the mysterious threats. The exciting thing about Coriolis is that you can use tropes from both traditional sci-fi and fantastic Middle Eastern or Arabian stories. The threats could be nanomachines run amok with a swarm intelligence from a faction lab or a jinn possessing a dignitary or character, as well as bio-engineered monsters or more weird creatures left from the now ancient and long gone progenitors. 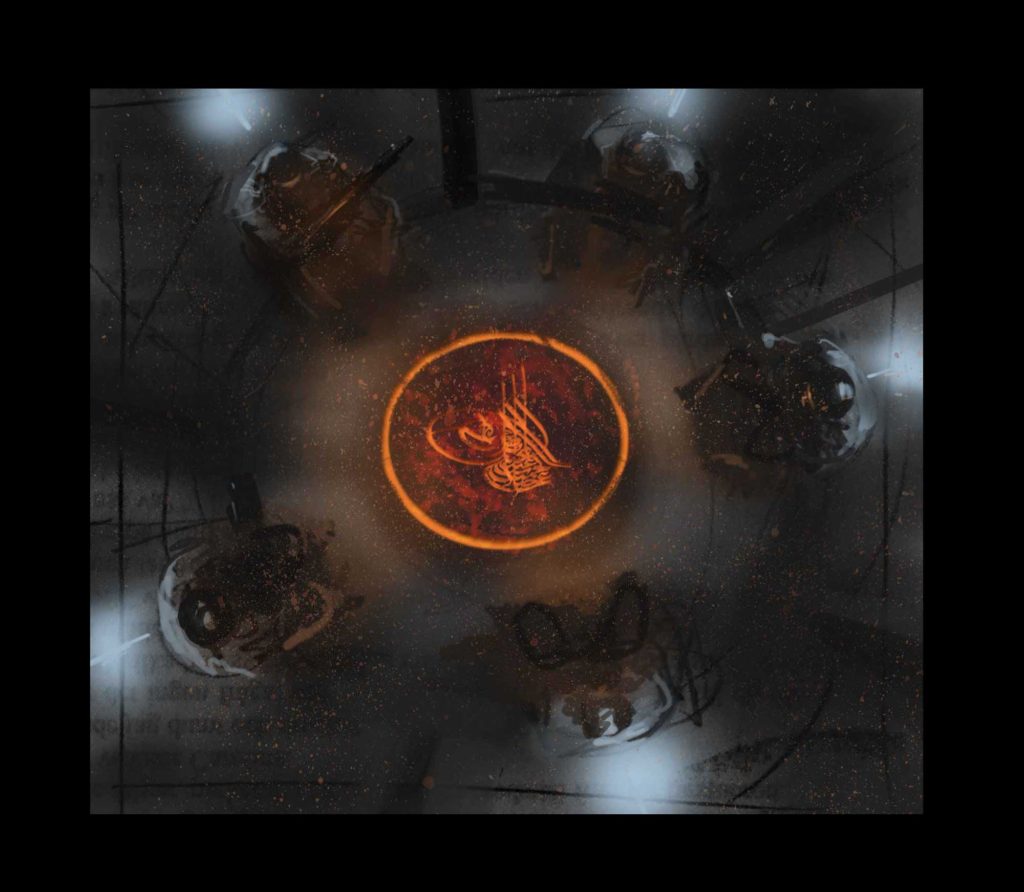 Who or what is Fria Ligan / Free Publishing League?
The Free League Publishing is actually five dudes who always dreamed of making fantastic games and books. We love RPGs and have played them since high school and on. Our first international game Mutant: Year Zero, co-published with Modiphius Entertainment, was awarded a Silver ENnie for Best Rules at Gencon 2015.

Our vision is to make cool games that are accessible – meaning easy to get started with but also have depth and long playability. The rules should mirror the setting and have interesting features without being over-complicated. With Coriolis and MYZ we think we’ve hit that specific nerve. 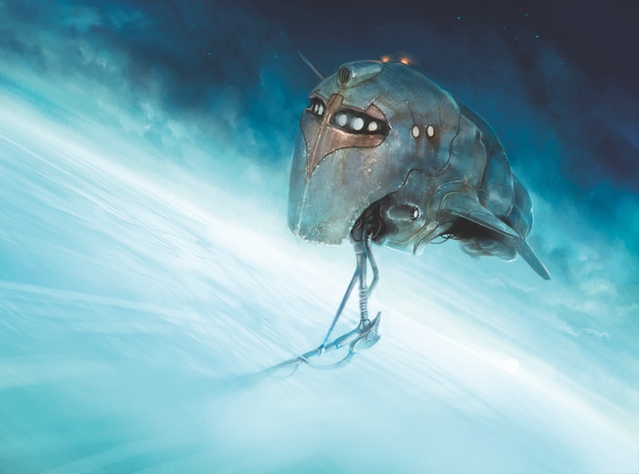 After the Kickstarter, what kind of further development can fans expect? Any other projects you want to share?
As Coriolis – The Third Horizon, much like Mutant: Year Zero, straddles the line between traditional RPGs and more indie-like games, we want to cater to a wide spectrum of play. We are already planning atlases you could use to create your own adventures in new star systems, but also ways to create your own missions related to your patron and group.

We are also working on a grand campaign, The Mercy of the Icons, where the characters become the protagonists for the whole Third Horizon – it’s fate and future. It’s really grand and bombastic!

Why do you think fans should support the Kickstarter for Coriolis – The Third Horizon right now?
Short answers: It’s a really cool game! But really, Coriolis has an exciting flavor, with the marriage of sci-fi and Arabian Nights, that makes it an excellent way to play sci-fi without getting bogged down in too much hard science but also not succumbing to a huge universe filled of over the top weird aliens.

With your support we can make this game even better! There are even more exciting stretch goals beyond the horizon, so just follow, support and you will see! 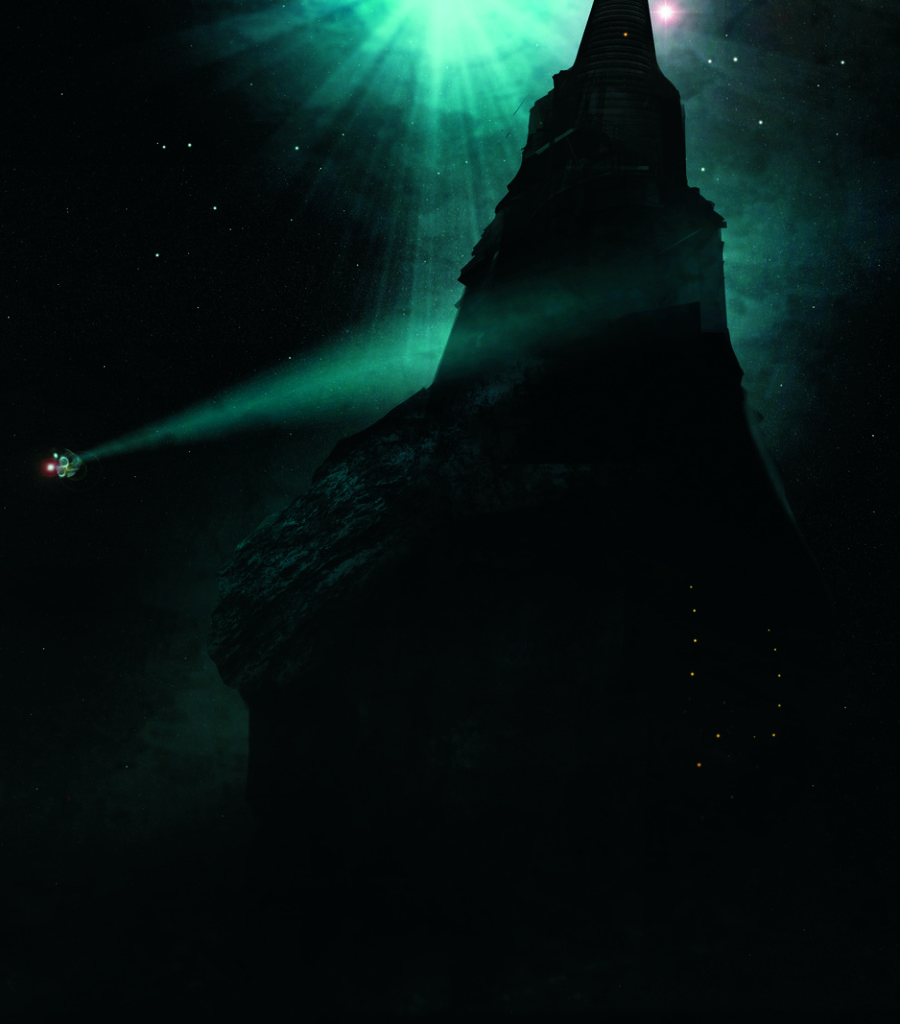 Thank you, anything else you want to add?
I should thank you for the opportunity to tell you about Coriolis. I’ve been waiting for a long time to see this game come to fruition first in Swedish and now soon in English. If your readers have more questions, please visit the Kickstarter or our forum. We’d love to talk more about the game! 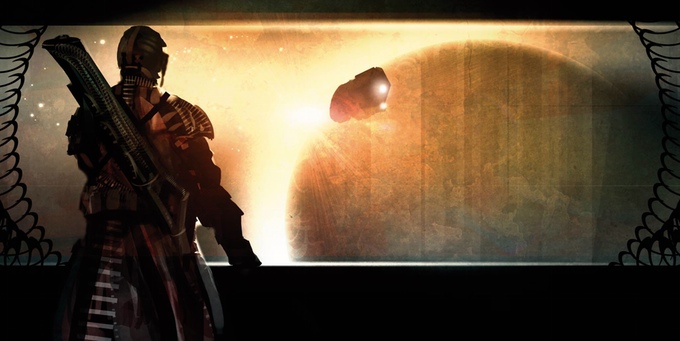