Modiphius Entainment. Tomas Härenstam, one of the creators and Lead Developer of the Mutant: Year Zero RPG, kindly provided me some answers about their recently into English translated post-apocalyptic roleplaying game from Sweden.

Usually, I start my interviews with a more or less personal introduction, but not this time. A proverb says, a picture is worth a thousand words. So what about the very atmospheric release trailer? 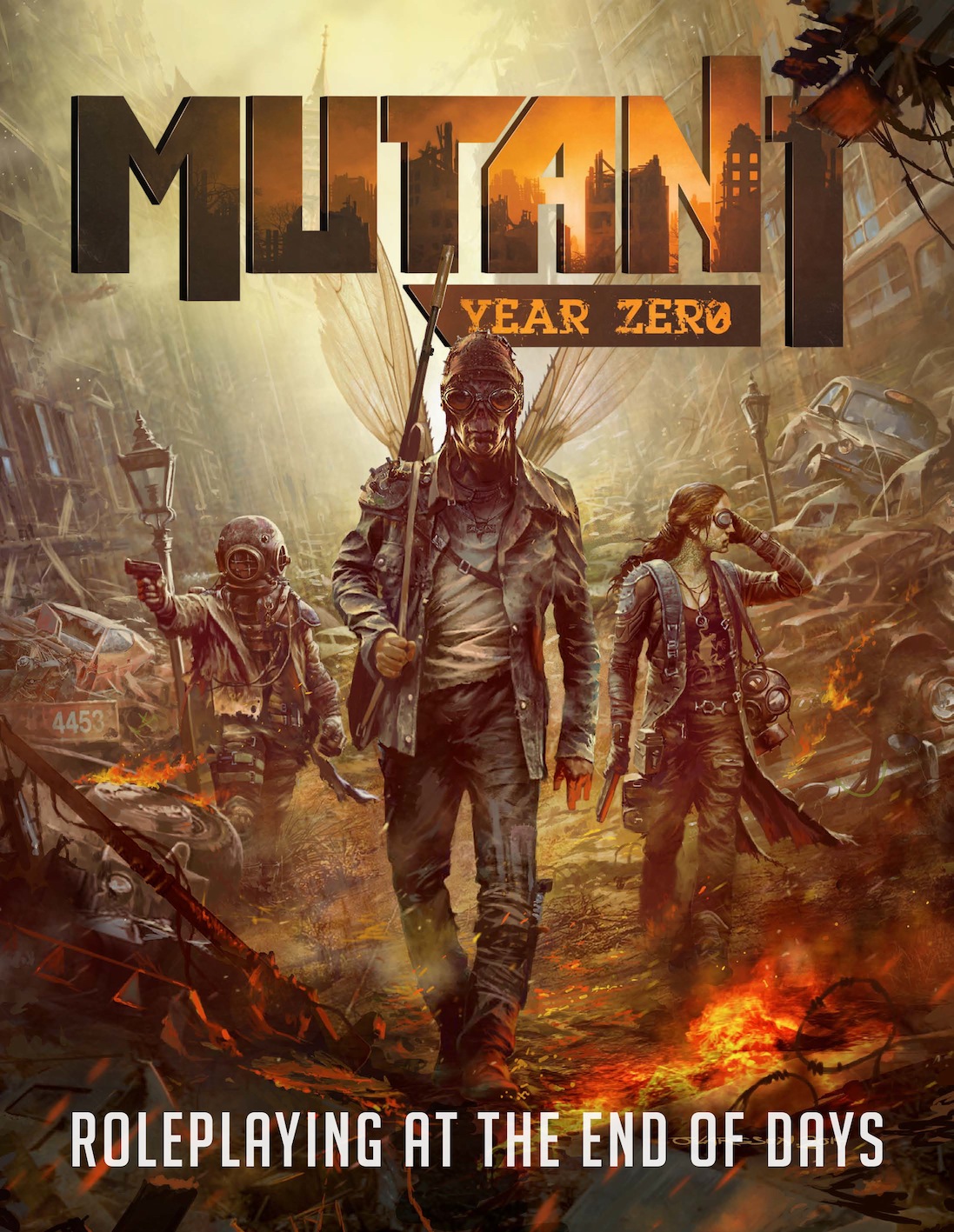 Please give us a brief overview of Mutant: Year Zero. How would you introduce the game to a novice or a roleplaying expert? Probably, you would use different approaches. Not everybody knows games like Gama World.
Tomas Härenstam: To the novice, I would say that Mutant: Year Zero is a game about what happens after the end of the world. It’s about finding your history and building your future. And cool mutants! I would add that they shouldn’t be put off by the size of the book – making a character takes 30 minutes tops even for a total beginner. The book is thick because it contains LOTS of campaign material, meaning you will need nothing more (except perhaps the custom dice and playing cards) for dozens (if not hundreds) of hours of playtime.

To the expert, I would say that Mutant: Year Zero is a post-apocalyptic game straddling the line between Gamma World and Apocalypse World, with a bit of Civilization added to the mix. It’s a game very much in the „neotrad“ part of the spectrum – it’s got the production values, ease of use and plentiful campaign material of a traditional RPG, combined with the kind of clever and thematic rules design usually found in the indie games. 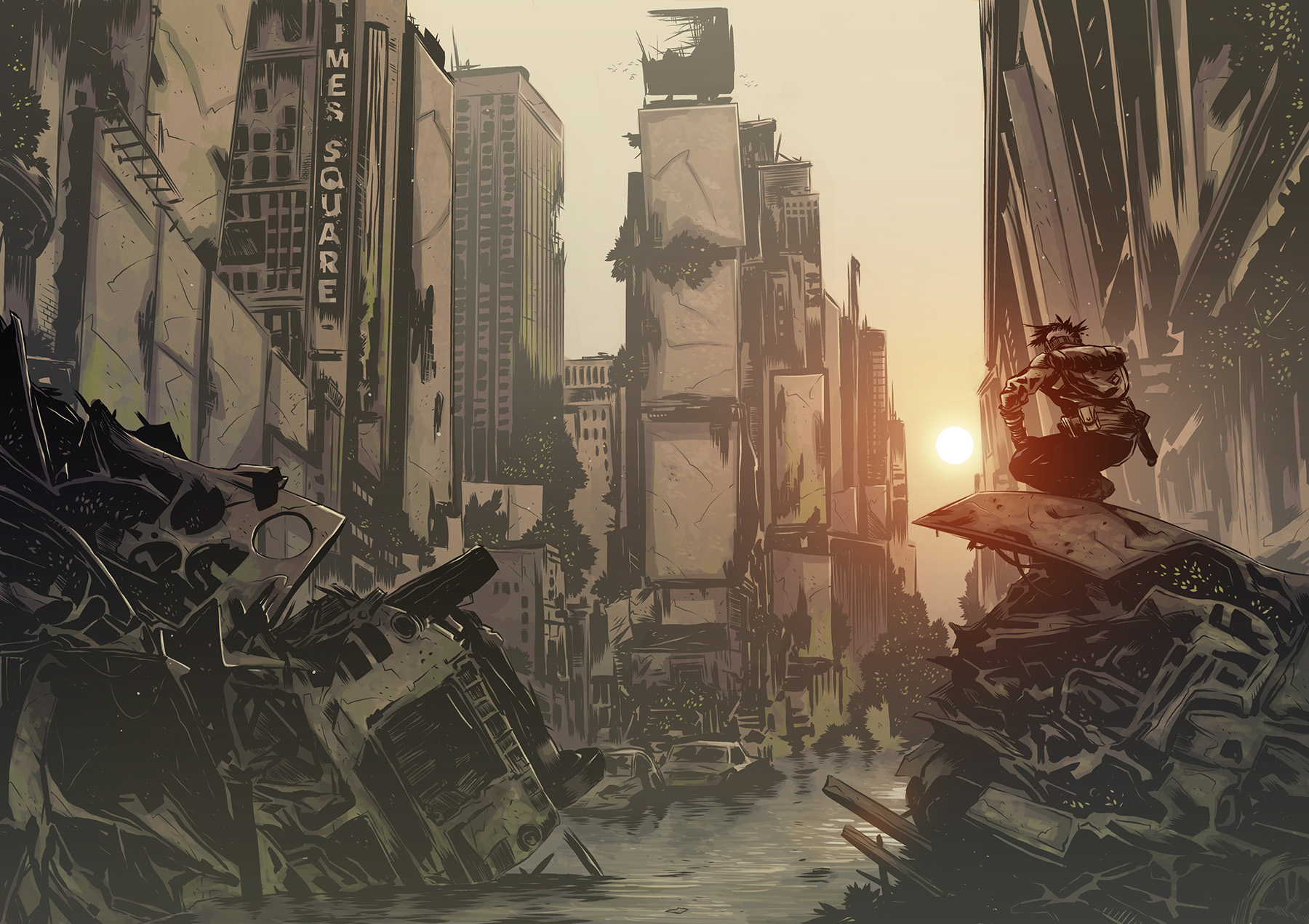 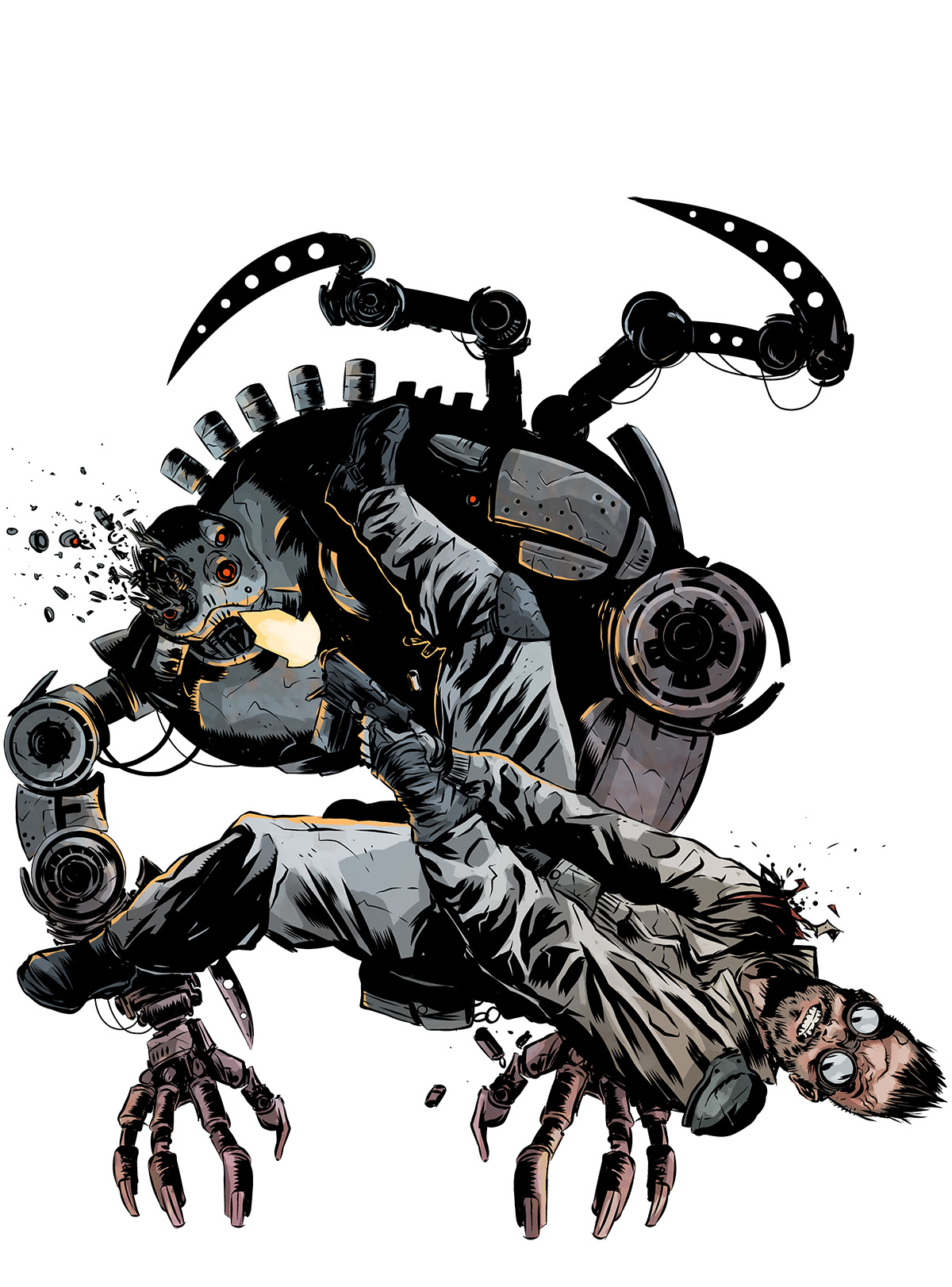 Which unique “classes, races, powers, etc.” can players expect?
There are eight „roles“ in the core game. Some are pretty straightforward, like the Enforcer, the Fixer, and the Gearhead.

Others are more odd and bring a particular flavor to the setting, such as the the Chronicler, the Dog Handler and the Slave.

In the core game, all PCs are human mutants. The major expansions to the game will add whole new classes, such as mutant animals, robots, and unmutated humans. The reason for this is to really go in-depth on each class, and give each class a unique origin story.

Each class has its own kind of „powers“ – mutants have mutations, mutant animals have animal abilities, robots have modules, etc.

What are typical threats that the players will have to oppose?
Mutant: Year Zero takes place in two distinctly different environments – the Ark and the Zone. The Ark is the PCs‘ home, an isolated settlement in the middle of the wasteland. In the Ark, there are „Lord of the Flies-like“ power struggles between Bosses vying for control, and the most common enemies are other mutants. Outside the Ark, in the Zone, there is a plethora of monster, wild mutant tribes, and bizarre Zone phenomena. 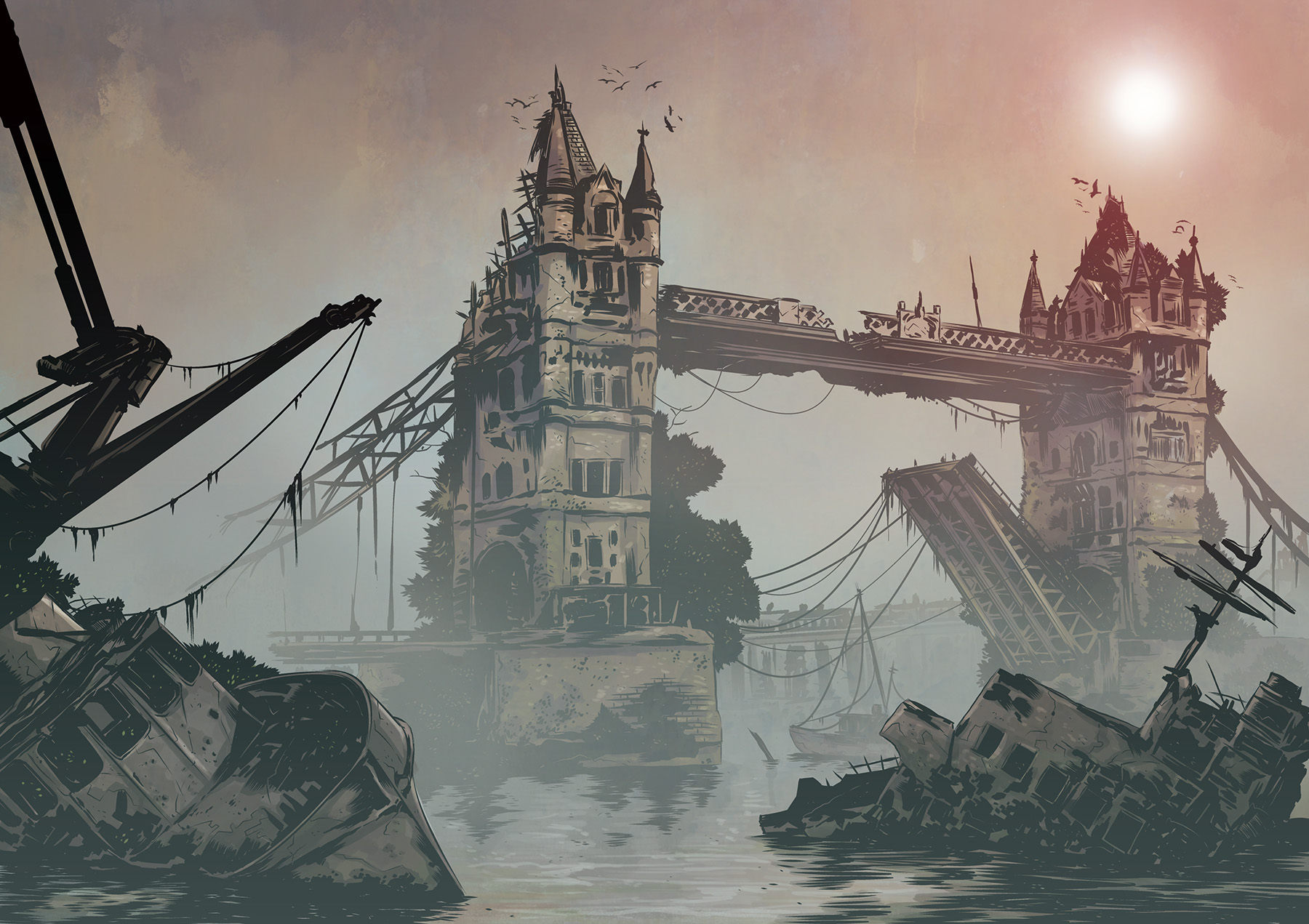 In your opinion, what are the most important features of the Mutant: Year Zero game system and setting?
Ruleswise, I think the two most important features are A) the pushing mechanism, that makes every dice roll a real risk-reward dilemma that feeds right into both mutations and resource management, and B) the system for building and developing the Ark, Civilization-style.

Settingwise, the most important feature is that the world is largely unknown for the PCs at the outset. The players and the PCs explore the Zone together. This makes the game and setting very easy to grasp for a new player.

There is an epic backstory for the entire setting that the PCs can learn, by playing the game.

What are the relationships between the current and previous editions of Mutant: Year Zero? In this context please tell us more about the connection with Mutant Chronicles.
The Mutant franchise has a long history in Sweden. The first edition came out in 1984, and was very much a Gamma World clone but with a ruleset from Basic Roleplaying. In the years since, there have a number of expansions and new editions, each giving the franchise a new spin and flavor.

Mutant: Year Zero is something of an homage to the original 1984 version, albeit with a very much modernized rules system and an even greater focus on true post-apocalypse, where the PCs need to fight to survive and to build a new civilization on the ruins of the old.

Mutant Chronicles actually started out as something of a spinoff from Mutant, but pretty quickly developed its own particular identity.

Mutant: Year Zero reminded me in a good way of Vincent Baker’s Apocalypse World or Gamma World with much less gonzo elements. Which inspirations did you really have?
Those two games are definitely on the list of big inspirations. Mutant: Year Zero certainly has some elements clearly inspired by AW, but in the general the game is less „indie“ in the sense that it provides much more setting and support for the GM.

Mutant: Year Zero can be played as a pretty tradtional „party of adventurers“ game. At the same time, the game is more „indie“ than Gamma World as it, for example, has rules for social conflicts and is less focused on combat. The tone is also considerably less gonzo than GW.

Other inspirations – if we talk about RPGs – are Urchin, The Quiet Year and some of the OSR hexcrawl systems. 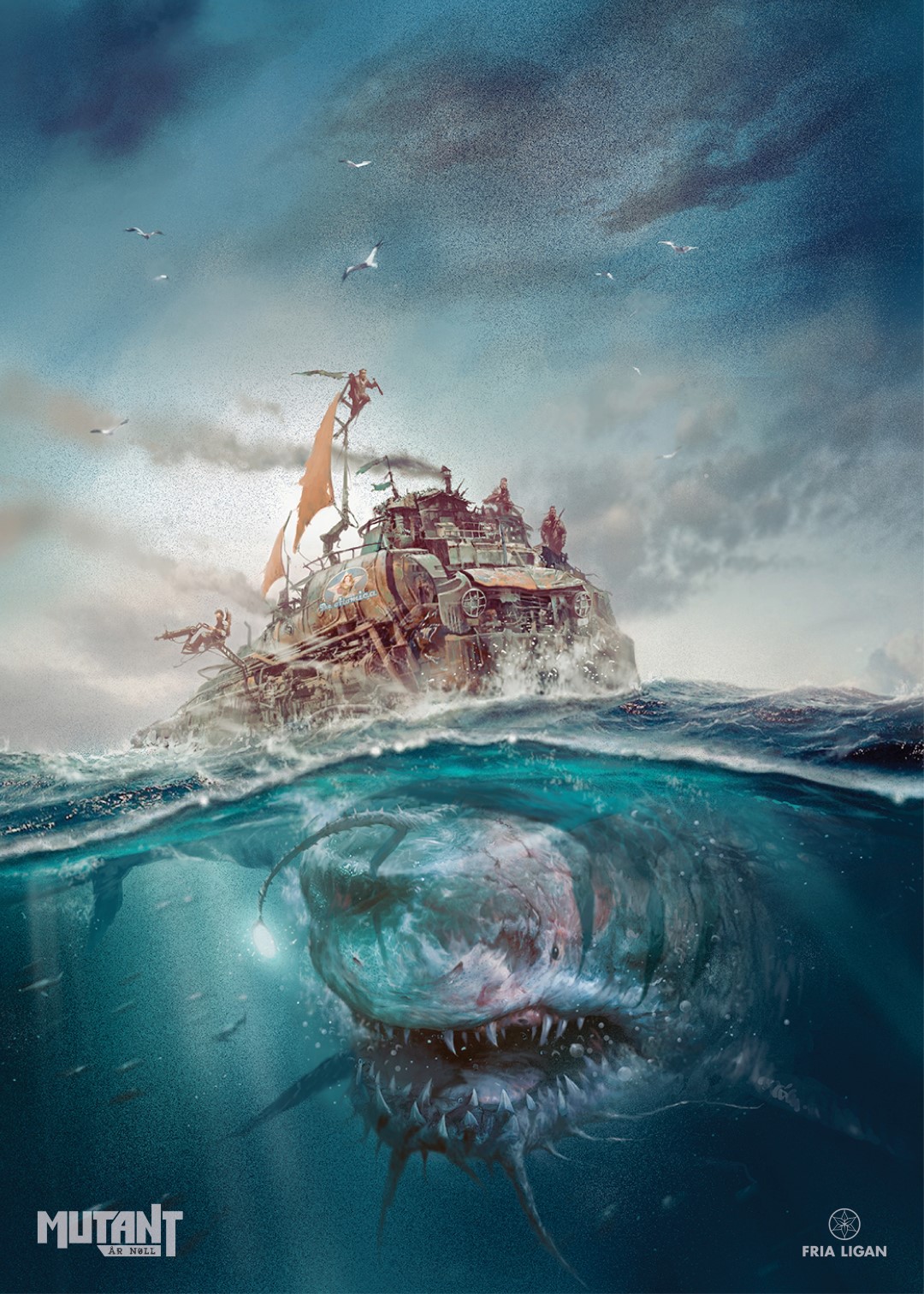 As far as I know there are several other products for Mutant: Year Zero in Swedish. What kind of further development can international fans expect?
Yes – in Swedish we have already released three smaller supplements called Zone Compendia, and we are just putting the finishing touches on the first big expansion – introducing the mutant animals.

The first English supplement (a Zone Compendium) is being translated as we speak, and we hope to have it all done within a month or so.

By the way: How would you describe the Swedish roleplaying scene? What are the most popular international and national roleplaying games in Sweden?
Sweden had a „golden age“ of roleplaying in the 1980s, and the scene is still quite strong. In the last couple of years we have seen something of a renaissance, with several new games with great production values being released. 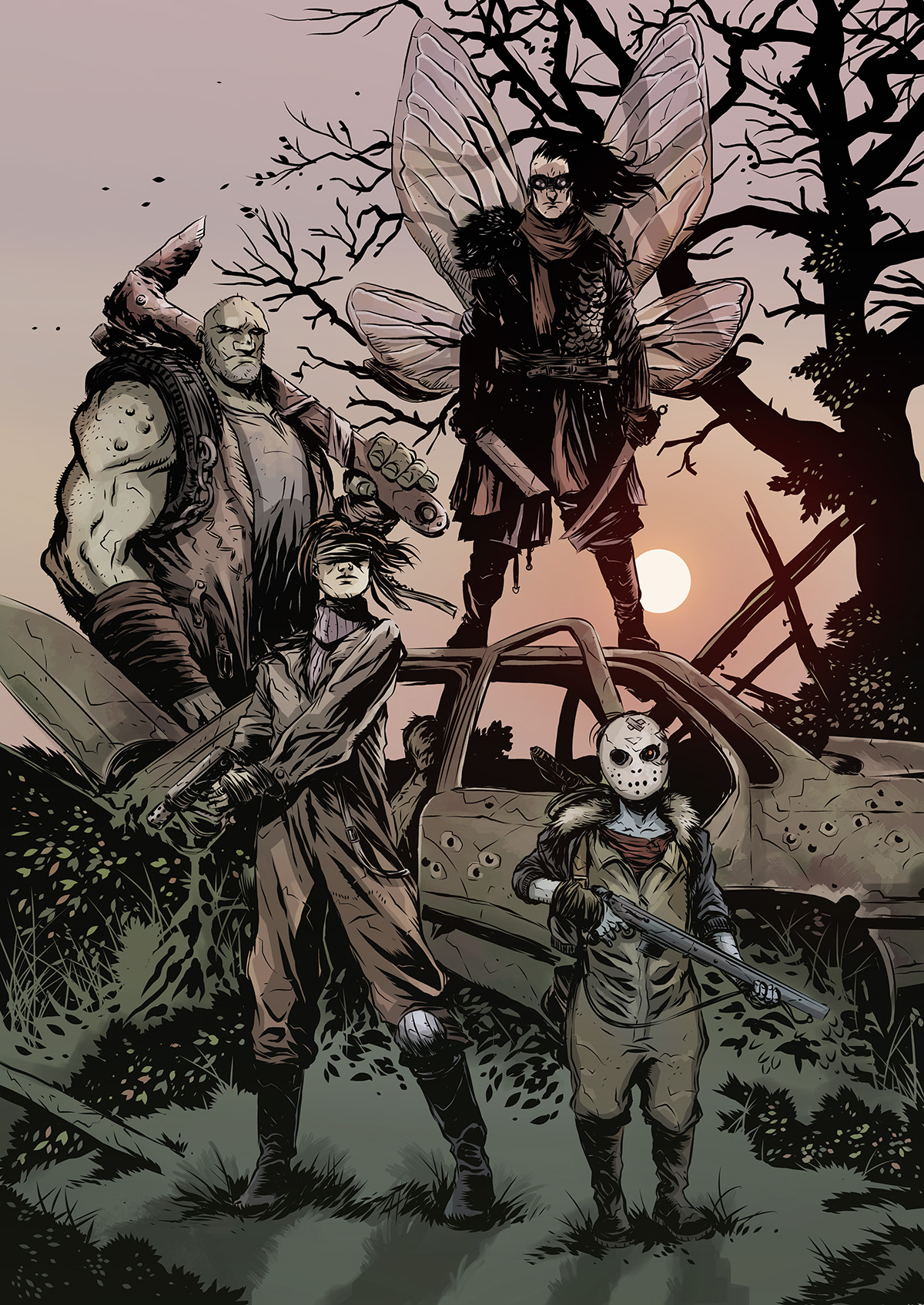 Thank you. Anything else you want to add?
Thanks for the opportunity to talk to you – Mutant: Year Zero is a personal dream project for me and I do all I can to spread the word about it! If you want to know more, check out the Modiphius website dedicated to the game or the video dev diaries that we’ve made. 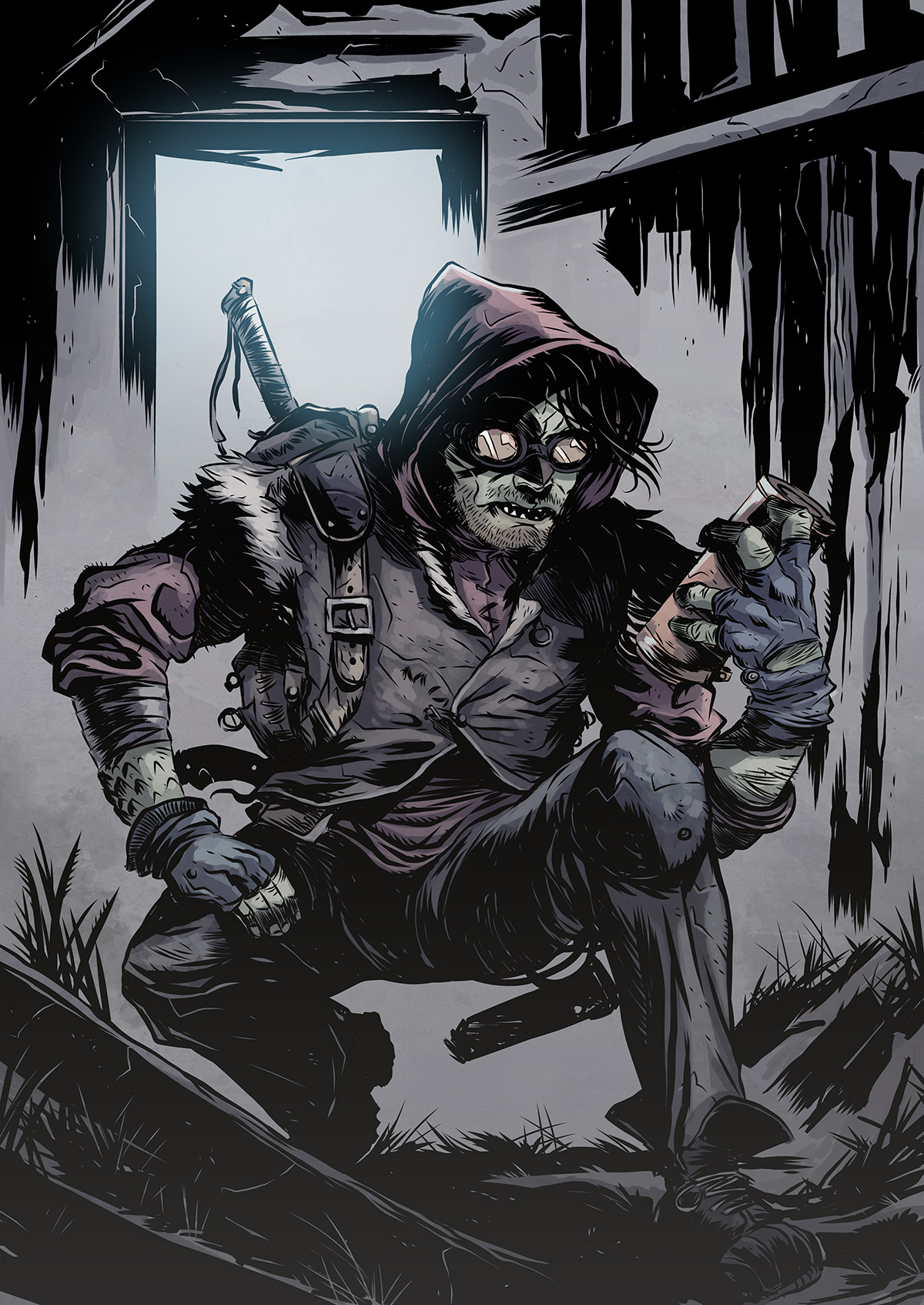 After Apocalypse World and Degenesis: Rebirth Edition I hesitated to buy another post-apocalyptic roleplaying game. On a whim, I bought it on the last pre-order day.

There is a lot of buzz about the aforementioned games. Vincent Baker’s Apocalypse World got the ‚Powered by the Apocalypse‘ stone rolling. A lot Indie RPGs used and developed his ideas further. I really like their approach to encourage player creativity, although the sheer production value (artwork, print) of some books could be better.

Degenesis: Rebirth Edition is quite the opposite – two impressive coffee table roleplaying books with 700+ pages to start with. A lot of evocative eye candy artwork and ideas, but for me it fails as a RPG, because it does not inspire me. It feels like something for retellers of already told stories. My own imagination smothered by the weight of overloaded concepts. I somewhat missed the thread running through the story of Degenesis and I found it unnecessarily confusing. It is not really bad, but the creators wanted to much for my tastes. 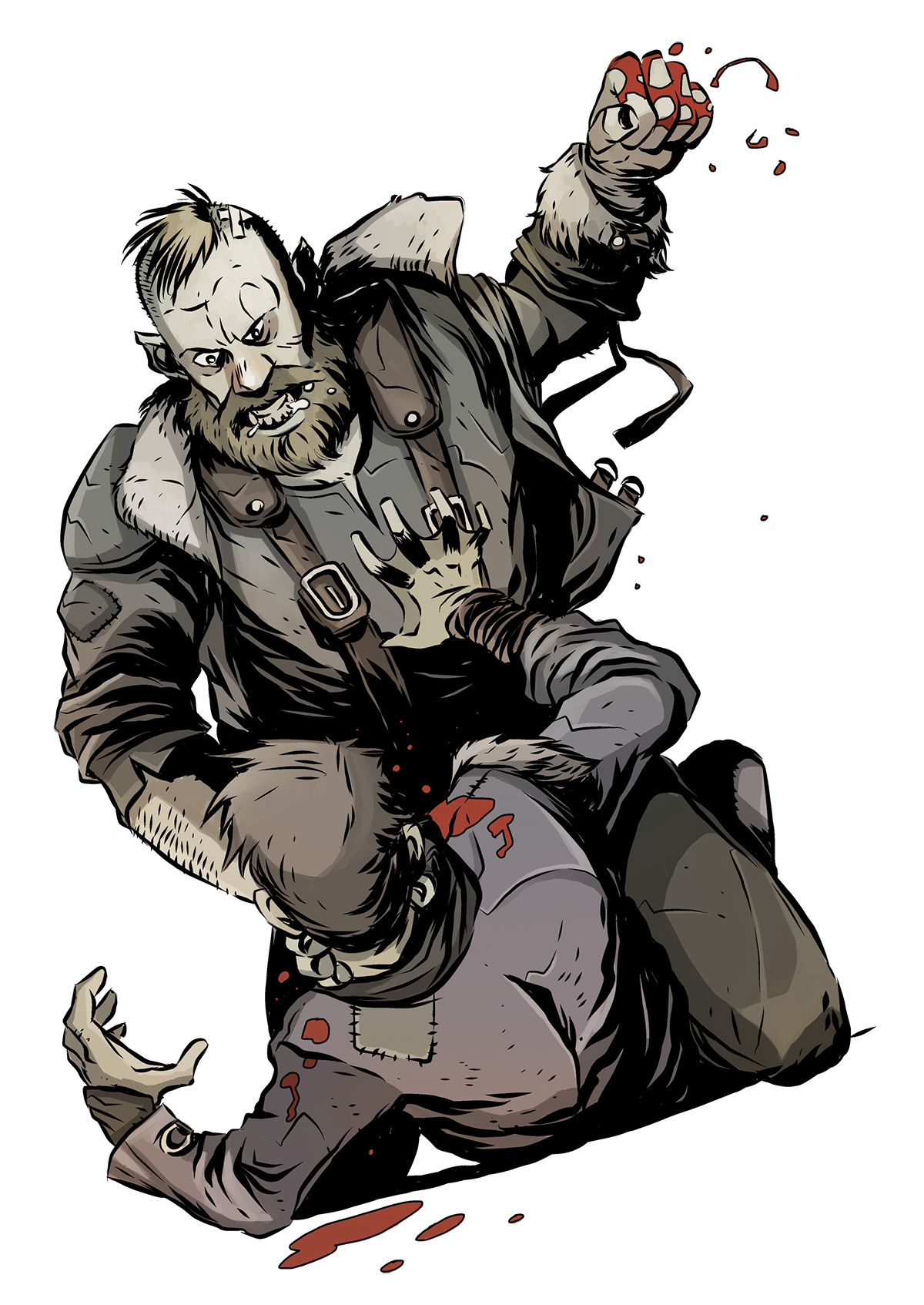 Mutant: Year Zero lies somewhere in between these two. I did not expect very much. The comic artwork hooked me initially. After skimming through the PDF I started to read.

The rules seem quite easy – a pool system with special 6-sided dice. The loosely structured open setting has some highlights and offers enough room for my own twists and turns. The easily understandable metaplot (e. g. Eden) does not feel like ball and chain and is in my opinion replaceable. I do not know if the game engine will survive at our game table. You can play with standard dice (d6), but the recommended special dice could be a double-edged sword. They might easy to grasp for new players, but sooner or later members of a group should buy their own Mutant dice. The dice rolling on a virtual gaming table could be another question for online groups.

Anyway, Mutant: Year Zero arouses my curiosity and the desire to create my own Arc and Zone. It feels like there are subliminal messages on nearly every page: Be creative, play me, find Eden!

I do not say it will, but Mutant: Year Zero has (for me) the potential to outdo Apocalypse World and Degenesis: Rebirth Edition. Sorry, I have to come to the end, savage Zone Ghouls are coming … 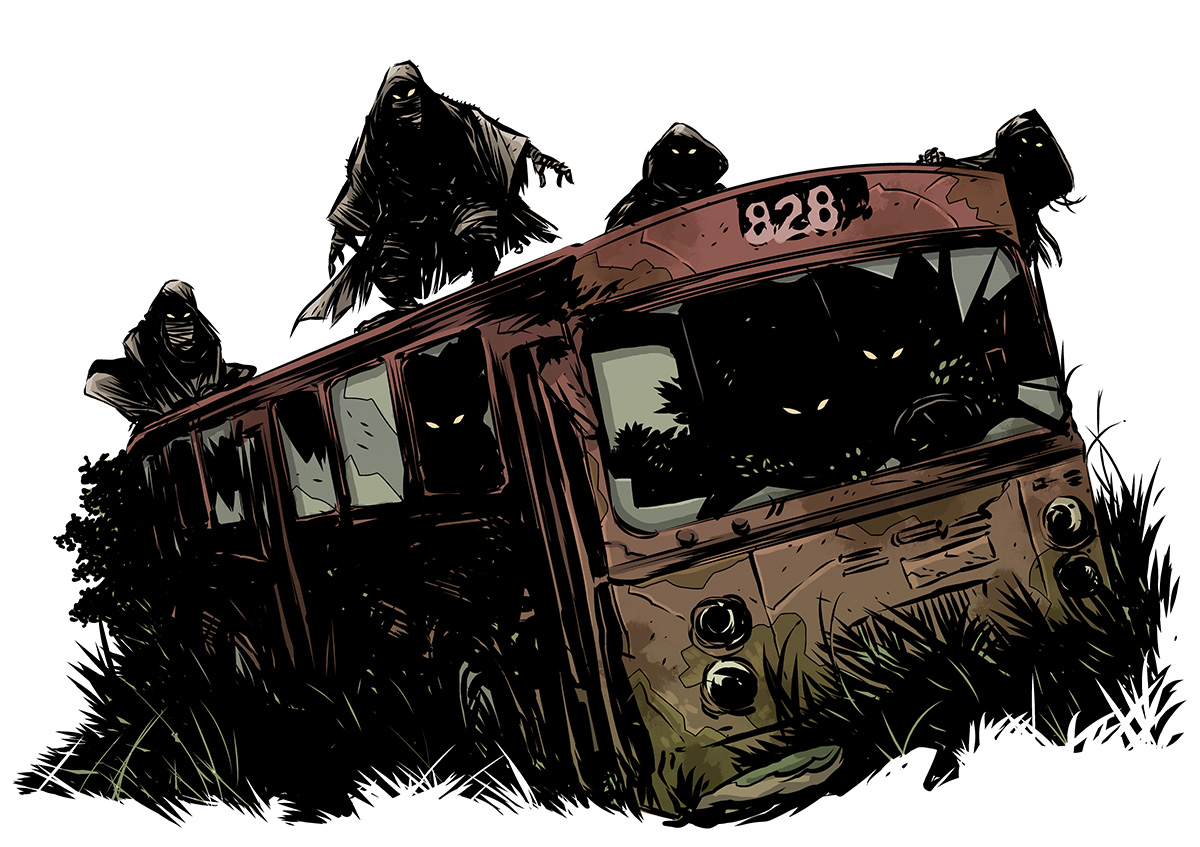