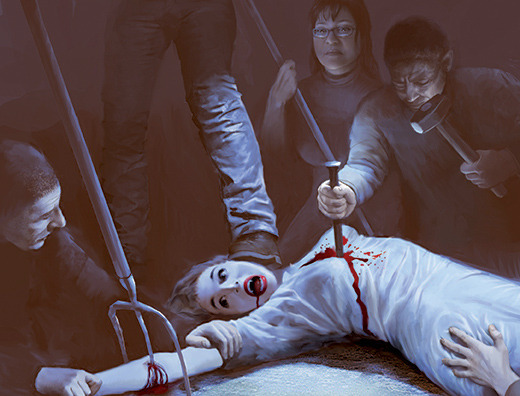 Deluxe Hunters Hunted II, currently there is a Kickstarter for a new edition of this classic World of Darkness title. The author Justin Achilli states in the following interview that many followers of the classic World of Darkness are coming back with the remake of Vampire: The Masquerade (V20). I can only speak for myself, but I am going back to the machinations of the Camarilla and the Sabbat. As in the olden days I am reviving my hunt for some prey in dark back alleys. Wait, there is someone. Who hunts here whom? I hope you like the interview and join our sinister hunt.

obskures.de: Hello Justin Achilli, please share a bit about yourself and your gaming experiences.

Justin Achilli: I’ve been playing games for decades and making them for almost as long. For me, games are hanging out with other people and getting to know them through the choices they make. To that end, I’ve gravitated toward multiplayer games over the course of my career, and they’re what I enjoy most when I play.

obskures.de: You are the man behind the upcoming Deluxe Hunters Hunted II. Give us an elevator pitch about the book.

Justin Achilli: HHII lets players step back into the role of mortals, particularly those mortals who have learned the horrible secret of the Kindred but won’t simply give up their world without a fight. Put the vampires in their place.

obskures.de: What should a fan read, watch or listen to get in the right mood for hunting hunters?

Justin Achilli: Anything that puts the player in the mood to fight back against unfair odds. Hunters Hunted II is about standing against a threat even when (and because) the deck is stacked against you. Whatever gets your blood up — that’s the emotional response Hunters Hunted II aims to create. 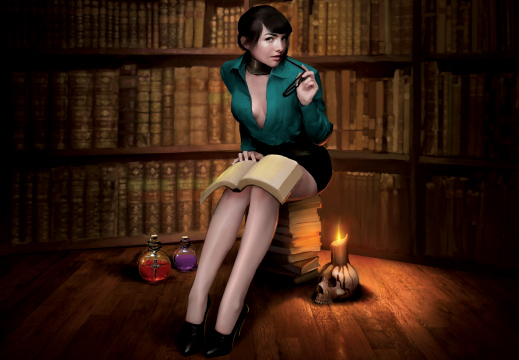 obskures.de: What is the difference to previous editions or better, what makes it special for you and for the fans. I think many fans own the original edition.

Justin Achilli: The tone of the book really focuses on the hunter’s lonely path, and the fact that he has to trust these other hunters, who themselves have suffered some scarring, momentous interaction with the Damned, to help him bring down the conspiracy of the night. I think it heightens the previous versions themes a bit, while also increasing the tension of the cooperative goal. For example, there are new systems for planning an action against the undead, and for working with other hunters to get the finer aspects of the hunt correct.

obskures.de: Why this book and not another one – like a new campaign setting or a book about the mysterious Inconnu? The focus for the new Vampire: The Masquerade (V20) line
seems to be on reissues. I think there is still enough room for new material.

Justin Achilli: There’s a ton of room for new material, and I think that’s where the bulk of Onyx Path’s efforts will lie, going forward. But in the interests of revisiting some classic titles and updating them, the hunters definitely have a place in the rejuvenated World of Darkness. I also think they’re generally an underused presence in stories about the Kindred, who really should fear the mortal world, to a degree. That’s the keystone of the Masquerade, of course.

Justin Achilli: We’ve really seen the „classic“ community come back to the fold since releasing V20, as evidenced by the three (and hopefully more!) fully funded Kickstarters for Masquerade game books. They’re tremendously supportive — they help at every level, from getting the books funded to finding errors in the preproduction text, to playing the game and keeping Vampire alive! Er, undead. I think the game really hits two notes for people. The first is the fun of storytelling, which the game first explored in 1991, but the second is that kind of „one more time around the block“ feel, since the game has been out of print for so long and new material is only now available again.

obskures.de: If you had to choose one book (except core rules), which book does every Vampire: The Masquerade fan need and which the Vampire: The Requiem fan?

Justin Achilli: The Book of Nod, hands down, for both Vampire versions. It’s the extremely emotive central pillar of a millennias-long secret war among the Damned and their many factions. Even if you go for the more personal, introspective route, the weight of history and the magnitude of its Biblical origins make for a breathtaking setting (even if you’re using some other point of origin for the Kindred). 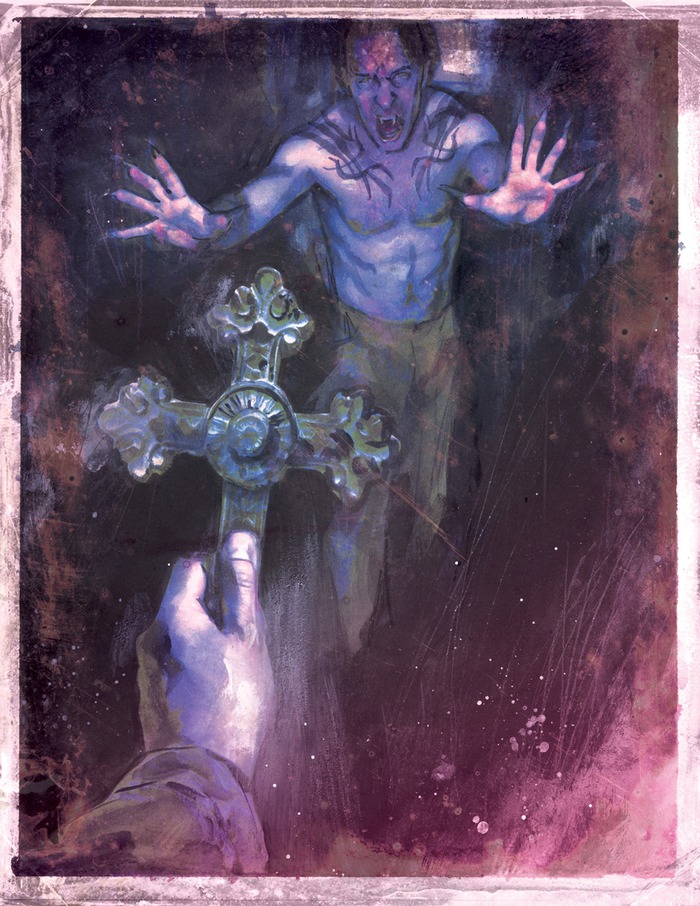 obskures.de: What is your next project after the Deluxe Hunters Hunted II? Maybe you have a dream project …

Justin Achilli: I’m on Anarchs Unbound now, which is a chance to bring the wayward Kindred who the Camarilla thinks are a fractious subsect of their own and really turn them into a vibrant sect that’s relevant to the 21st century. As to a dream project, the Onyx Path schedule gives me a lot of leeway to explore what I’d like and that hopefully interests players, whether it’s a Vampire title or something else. Everything has some element of a dream project, or I wouldn’t do it, since OPP really lets us be our own bosses and evangelize the titles we like best.

Justin Achilli: Either, for different reasons. Classic, if I want to tell a story in a well-established world and in which I want to use the weight of the institutions to color the story — the sects and clans and even the world are characters unto themselves. New World of Darkness if I want to build something from scratch to tell a custom tale, since it’s more of a toolbox than a fully defined setting.

obskures.de: What is your favorite clan (Covenant)? Clan Giovanni, you wrote a novel about them?

Justin Achilli: The Ventrue! They own everything, and everything happens because they allow it.

Justin Achilli: At one time, I was a die-hard Camarilla advocate. Over time, I think I’ve seen my allegiances shift to more of an Anarch philosophy, or, in certain cases, to be relevant to the Tal’mahe’Ra.

Justin Achilli: It depends on the situation. When I want to do the worldbuilding and watch the player choices affect the outcomes, I’m definitely interest in gamemastering. On the other hand, I love being a guest in another storyteller’s world and messing with the scenery and other players, so I love playing, too. I like being a player to change the world; I like being a gamemaster to make the world.

obskures.de: Bela Lugosi’s Dead (Bauhaus) or She Lost Control (Joy Division) and which music do use for your games?

Justin Achilli: That’s not an either/ or question for me. I think Vampire benefits from having a wide musical library. The goth classics certainly have their place, but I try to highlight the breadth of personalities in a Vampire story with musical experiences that complement them. For example, I have a Spotify playlist for Vampire here: Succubus Club Rotation.

Justin Achilli: Tension, the ability for the player (not necessarily the character) to improve his ability to affect the world, the ability to set one’s own goals, and a sense of relating to the game environment.

obskures.de: A design tip for established or upcoming game developers and authors?

Justin Achilli: WRITE IT. Everyone has an idea for a game, but an idea isn’t a game. Buckle down and make the damned thing! Creation is the ultimate expression. Don’t be worried about perfection in systems or settings for your rough draft — that comes during development, so the faster you can get to a playable prototype, the faster you can get to refining in practice as opposed to theory.

obskures.de: What is your favorite role playing game of all time and in recent years? (Maybe there is something else beside the World of Darkness?)

obskures.de: Do you know Ken Hites Night’s Black Agents (Pelgrane Press) and what do you think about this alternative Vampire hunting approach?

Justin Achilli: I really dig it. Ken sent me a copy and it immediately made me dive into his reference material and imagine vampires behind the scenes. Since I work at Red Storm (along with fellow WW alumnus Richard Dansky), I’m surrounded by a lot of similar techno- and military thriller subject matter, so it’s right up my alley.

Justin Achilli: For art, I love Tim Bradstreet’s gritty urban fantasy and Larry MacDougall’s unbridled sense of wonder. For game design, I don’t know if I have a favorite. So much of RPGs relies on the storyteller that it’s case by case. I do prefer games with less randomness. For board or card games, for example, I like knowing that when I take an action, I can expect a certain result. That way, the interesting part of the game happens when I and the other players contest or combine those effect, as opposed to hoping for a beneficial die roll or card draw. I like Puerto Rico more than Settlers of Catan, for example.

Justin Achilli: This may sound weird, but I have some of my clearest thinking in the shower. I’m usually a pretty structured guy — I like being on time to work, and leaving on time, and setting up a specific portion of the day for analysis and insight, but for some reason, lightning bolts tend to hit me in the head when I’m in the shower. If you’re an inventor, create a waterproof notebook or iPad and I’ll buy one!

obskures.de: Thank you, Justin Achilli. Anything else you want to share with the fans?

Justin Achilli: Thanks for playing! It’s the single greatest reward a designer can have, to know that people are using what he makes to share time with their friends.

Images:
All images provided by The Onyx Path Publishing. Used with permission (08 February 2013).