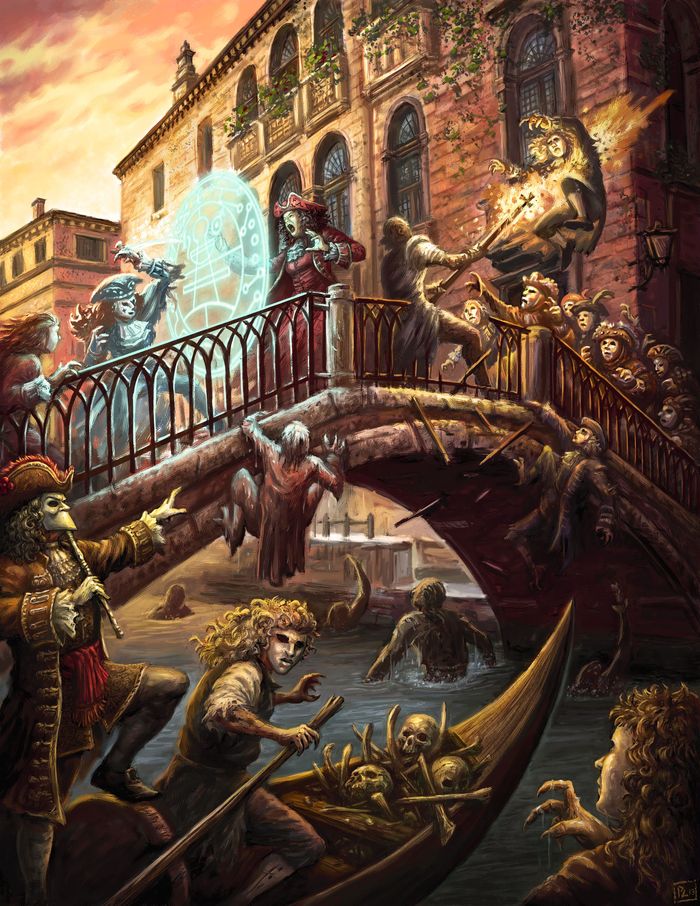 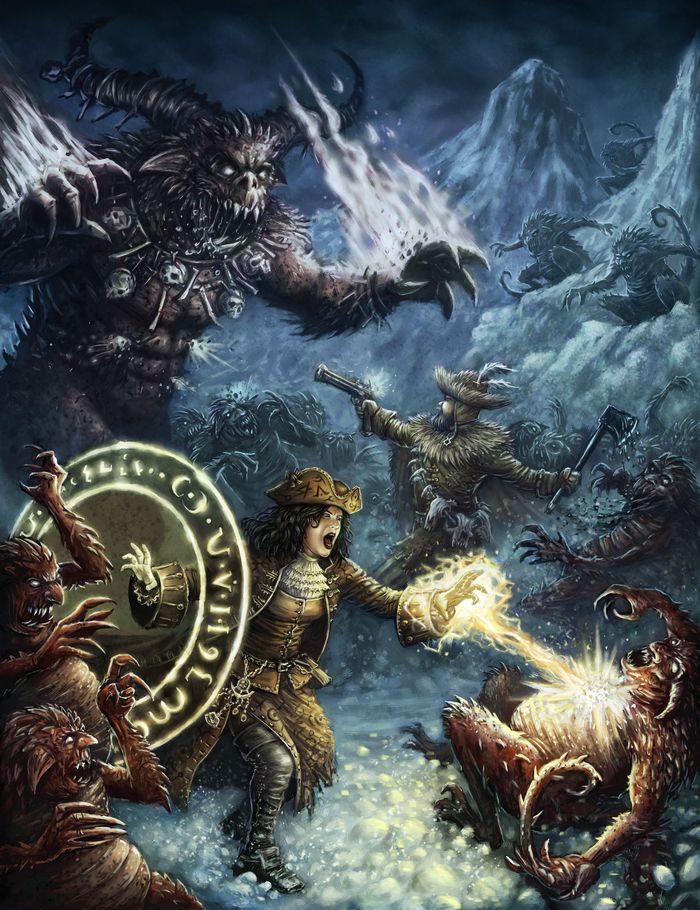 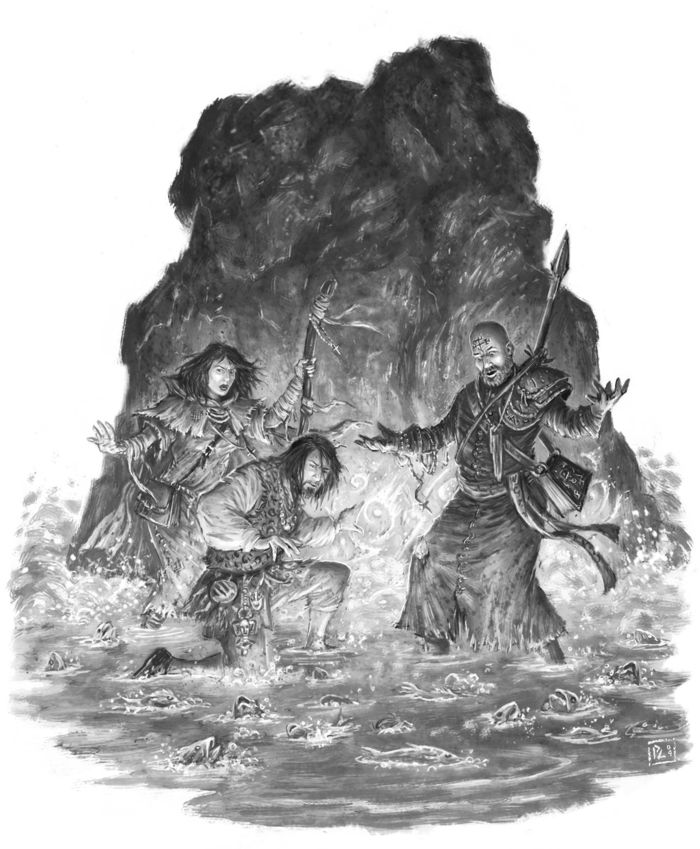 „A Role Playing Game where swashbuckling heroes face the supernatural horrors of the 1690’s. Inspired by the tales of Solomon Kane.

The Serpent
The Devil
Old Scratch
Satan
The Adversary

All names for the personification of Evil that has plagued Mankind since his first tentative steps upon the earth. Wherever Man travels he has found evil spirits, daemons, nephilim and all manner of monsters that prey upon both his mortal flesh and immortal soul. These creatures come in many guises, oft unseen until it is too late to escape their clutches.

Thankfully, there are those who have stood and not quailed before the horrors from hell; men and women with the faith and courage to not only hold back the tide of night, but to take the fight directly to the Adversary – even if it means storming the Gates of Hell itself!

These precious few are known as Witch Hunters – men and women chosen to become members of the Orders of Solomon and used by Providence to be at the right place at the right time, to thwart the schemes of the Adversary and his minions. From the ancient cities of the Old World to the nascent settlements in the New, Witch Hunters battle nests of Vampires, covens of witches, packs of werewolves, devils and more in their unending quest.

Hello, my name is Henry Lopez and I have a new world of adventure for you to play in. Witch Hunter: The Invisible World is what I like to call a Colonial – Swashbuckling – Horror game set in an alternate history not quite like our own.

Inspired by the great tales of Solomon Kane by Robert E. Howard, PCI published the first edition of Witch Hunter: The Invisible World to critical acclaim. Since that time, we’ve produced sourcebooks and adventures that have thrilled players, allowing them to explore the slightly alternate history of the Invisible World and fight the good fight against the unspeakable evils of the world.

Witch Hunter is not a tactical game, such as D&D where miniatures and battle maps are needed for play. Instead, Witch Hunter was designed to be more cinematic and free form, allowing the players (and the Grand Master) to concentrate and delve into the story than worry over the minutiae of game mechanics.

However, as thousands of others played in Home Campaigns and our Shared world Campaign, we realized that even though the game worked perfectly fine, it could be better. So we embarked on streamlining the rules and combat so that it ran even faster and smoothly.

The Invisible World, 2nd Edition. This 256 page hard back will feature the same robust game mechanic, but as I mentioned above, streamlined for faster play.

For those of you familiar with the 1st edition of the game, here’s a quick and dirty breakdown on what is different in this new edition:

Streamlined Combat: The defense pool has been eliminated and initiative is set at the beginning of the fight instead of being determined every round. There is no need for multiple rolls every round just to determine a baseline to work from.

Optimized Magic System: Rites have been streamlined in the much the same way. Witch Hunters that use sorcerous traditions no longer have to roll just to determine if they have the ability to perform a rite, and then roll to hit a target; one attack roll determines everything.

Easy to Follow Character Creation: Character creation has been formatted to make the creation of Witch Hunters a simple processes that still permits a great deal of customization. The book is formatted in such a way that the order of choices in character creation match the order that the rules are presented, there is no need to jump back and forth.

Otherwise the game still features the dice pool system and the free-form, seat-of-your-pants feel to combat. The rules serve the setting and story rather than the other way around.

While at its most basic level, what we’re hoping to accomplish with this Kick Starter is to raise the funds necessary to publish the book and get them into your hands and onto the shelves of your FLGS.

But we hope to do much, much more.

Our hope is that you, through this Kick Starter, will help us relaunch the entire line, not only reissuing such staples as an updated Grand Tome of Adversaries, but also such new titles as Cities of Mystery, a source book that details eight cities (four in the Old World and four in the New) that give your Witch Hunters a change of scenery along with unique horrors and challenges; as well as the Scholomance a globetrotting (potentially) mega campaign that will pit a cadre of Witch Hunters against the Devil’s Academy in the heart of Transylvania where they have the opportunity to ally themselves with the Order of the Dragon and launch a devastating attack on the Adversary’s labyrinth, to name just two and End of Days, a similar Mega-Campaign that has your cadre of Witch Hunters striving to halt the rise of the Anti-Christ.

Something else that fans have been clamoring for is playing Witch Hunter in other times. That’s a fascinating idea, but creating a book on each and every possible time period of interest would be impossible. Instead, I’ve called on some friends, such as Chris Pramas, President of Green Ronin, A. Scott Glancy, from Pagan Publishing and of Delta Green fame, Shane Hensley, President of Pinnacle Games and of Deadlands and Savage Worlds fame, writer, game designer and all around great guy Matt Forbeck, and Jim Pinto, who among his many works include The World’s Largest Dungeon and the World’s Largest City, to write up a campaign summary giving the GMs ideas on how to run such a Campaign. Time periods chosen will be revealed as Stretch Goals are met.

We have lots more planned, and we’ll reveal them as we make the Stretch Goals, but we need your help to get this robust line going, rather than releasing a couple of books a year. We have some great stories to share with you, so please give us a hand in making this project a reality. 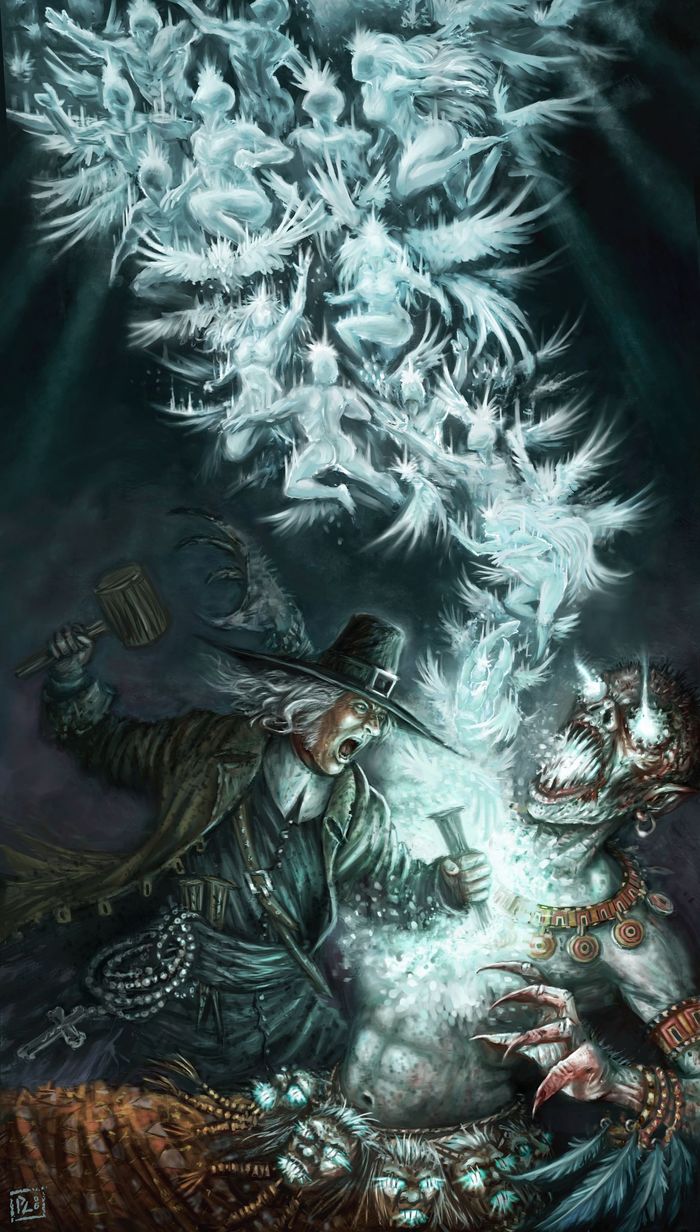