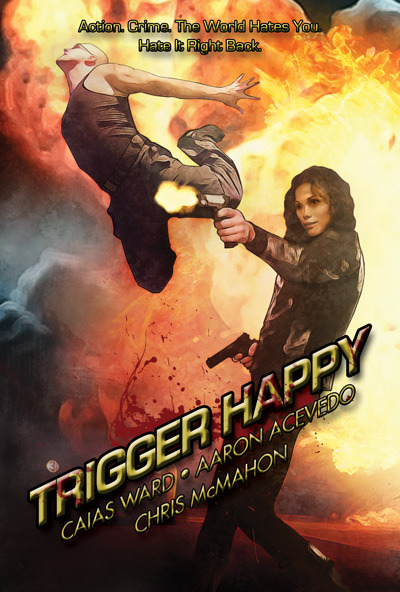 „Trigger Happy is the Role Playing Game of Action, Crime and a World Which Hates You.

Get ready to Drop the Hammer and Take it to the Limit in Trigger Happy!

This Kickstarter is to publish Trigger Happy. Trigger Happy is the RPG where The Transporter and Die Hard meet the Shield and The Wire. Trigger Happy takes place in a world turned up to 11, where Protagonists live life one trailer-worthy moment to the next. You are a Protagonist; from cop to war vet to neighborhood kid done good enough, you find that the world tries to shove you around and you want to do nothing more than shove it right back.

What, never seen someone beaten to death with a canoe?

Trigger Happy is based around a simple d10 die mechanic, adding an attribute to the numbers rolled on the dice to reach a Target Number. This might seem pretty boring, except for two key elements which make Trigger Happy different than your average game: Triggers and Limit.

Triggers are the way you take charge of your character’s story. There are two kinds: Ins and Outs. Ins are the trouble that you find or always seems to find you. They’re elements of the story that drive your character arc and make you rise to the occasion, giving you bonuses in the appropriate circumstances. Outs let you change fate, giving you a mechanical bonus or allowing you to take narrative control of the scene to your character’s advantage.

Meanwhile, Trigger Happy does not use Wounds, Health or Stamina to determine how long a character stays up, but Limit. Limit not only measure how much punishment you can take but how far you can push yourself to succeed. Fail a die roll? Take it to the Limit (by spending Limit) and succeed in what you tried to do. Be careful, as everyone has their Limit and when you hit zero it’s lights out!

You’re no hero; you’re the Protagonist. You drive the story either by making stuff happen or by reacting to all the trouble that finds you.  Against you, you’ll find the whole world of people hating you:

Jamokes: these are the mooks, the chumps, the pushovers that get in your way. They are to be mowed down in spectacular fashion.

Mobs: ever wonder why a dozen guys don’t attack the Protagonist at once? Well, they are part of a Mob.trying to wear you and your friends down. You have them outnumbered 1 to 5 so get to work!

Henchmen: these guys can be tough customers, Taking It To The Limit just like you and really messing up your day.

Bosses: they are just that, Boss. It’s like looking in a cracked mirror; they have Limit and Triggers just like you and really want to put you down.“
– Trigger Happy: roleplaying in a World Which Hates You product description