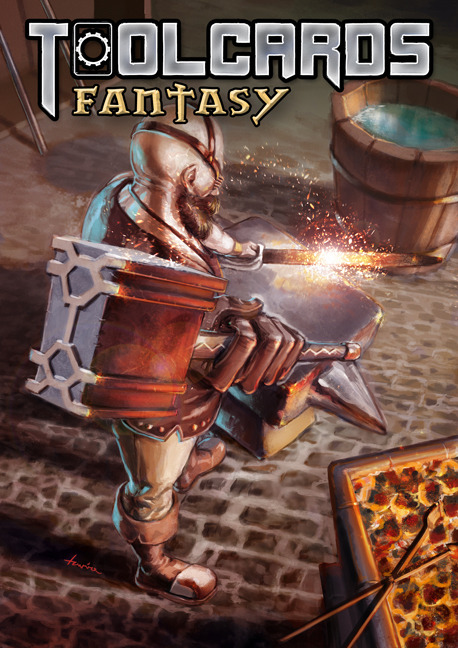 „Toolcards are easy-to-use cards that inspire the GM to run fast, exciting adventures. Names, monsters, treasure. Toolcards has it all.

Toolcards are an exciting new game aid for gamemasters who need at-a-glance information, without slowing down play. Based on the highly successful Toolbox and Ultimate Toolbox, Toolcards are the next step in gamemastery tools and inspiration that gets you right back into the game.

Toolcards keep the action moving with instant answers to the most basic questions that you didn’t expect the players to ask. 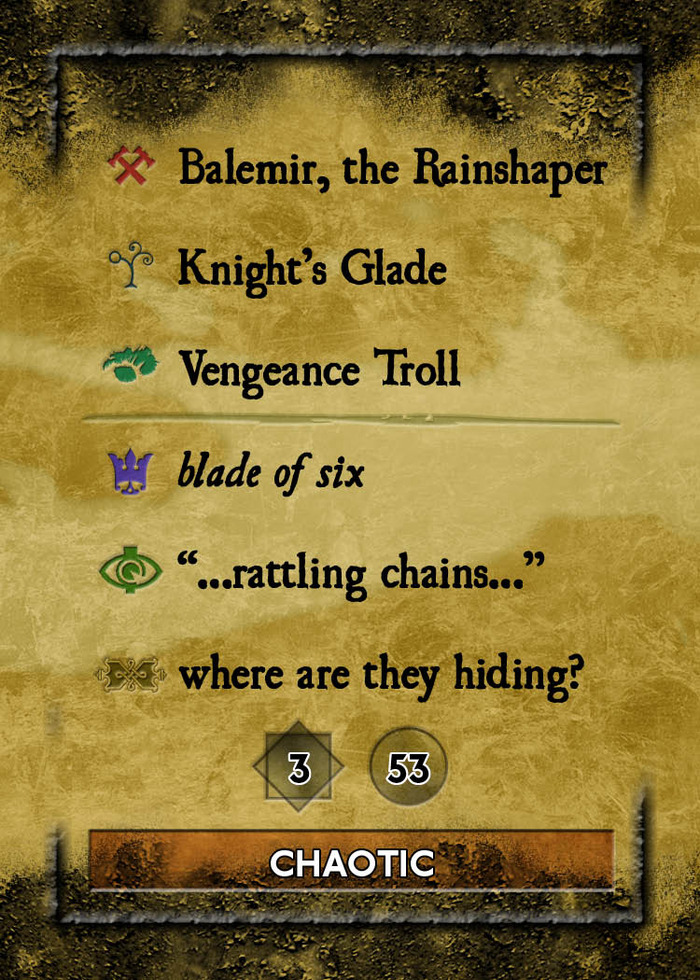 Item 1 is an NPC name and job. This is the high-fantasy side of the card, so this character is probably a mage specializing in weather. Or a snake-oil salesman. It’s up you.

Item 2 is a legendary story or location. Knight’s Glade sounds like the kind of place hidden from the prying eyes of commoners and evil-doers. Perhaps something magical is hidden there.

Item 3 is a monster. Always colorful and inspiring, these entries provide a quick monster concept for the gamemaster to just run with. Maybe it’s a wandering monster, or maybe it’s something guarding the Knight’s Glade from item 2. If you’re building the evening’s adventure, perhaps it’s the final encounter. You decide.

The next grouping is more flavorful, and great for tense/dramatic situations. It’s less crunchy and more descriptive.

Item 4 is a magic item or in the case of the low-fantasy side of the card, a cool tinkered item, like a gnome sheath. In this instance, the blade of six is listed — obviously a powerful magic item, something the locals may be talking about at the tavern.

Item 5 is an atmospheric element of some kind, like a sight or sound. In this instance, rattling chains could be heard from around a corner or seen hanging from a midshipman’s arm as he walks the deck.

Item 6 is an interrogative, designed to stimulate conversation. The PCs have been captured and people want answers. A guard runs through a shop and asks a merchant, „where are they hiding?“ The question the PCs might ask is who. The reverse side of the card has responses to interrogatives, though never lined up to match, keeping people guessing.

The bottom third of the card is random components. Seriously. There was room at the end of the card, but NINE items was just overload. We thought about this. Fleshing out the final piece of the card with numbers and tone seemed the perfect finish rather than three more random things you see on the road.

The two sets of numbers are random numbers from 1 to 20, or 1 to 100, each represented an equal number of times in the deck. Forgot your dice? Well, Toolcards didn’t.

The last piece of information is a mood. Something to inspire the GM on how to drive a scene when it’s veering off course, or a great way to plan an entire session of play. Looks like chaotic energy is going to round out this game session, which is probably what the players wanted anyway.“