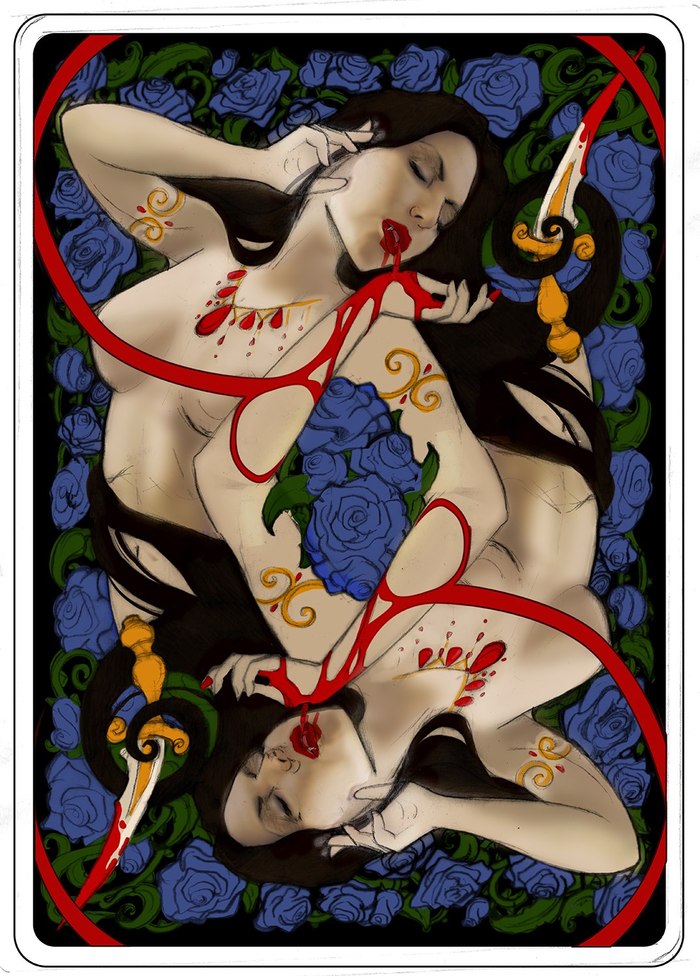 „Succubus: The Reborn is a deck of vampire themed playing cards, but it is also something more. It is a new take on a classic game device: cards.

First and foremost it is a custom deck of playing cards printed at the highest possible quality by the world leader in cards, The United States Playing Card Company, makers of Bicycle and Bee cards. Each card is lavishly illustrated and carefully designed to illustrate the theme. And each deck, and all of the components offered in this Kickstarter, are made in the United States.

Second, each card bears a symbol which represent the classic game of Rock, Paper, Scissors and even Bomb, which makes the Succubus: the Reborn deck the premier deck to own for fans of Live Action Role Playing Games.

Finally, and most intriguingly, each card in the deck has at least one or more unique (and sometimes hidden) symbols, which allow it to be used in a unique party game for players clever and sensible.

Succubus is a unique game designed to turn a dull get together into an exciting high-stakes game of social poker. The game requires a “Dealer” who runs the game, and knows the rules, which are simple. The players are Vampires who are members of four great Lineages (teams) represented by the four card suits.

The one rule that the players need to know is that the game is played by convincing, or coercing, other players to trade cards with them in order to get the best possible Poker hand. They need to work together as a team to succeed, but each is vying to be Captain of the team. To win, players must trick, lie, bribe, and outwit the other players into giving them the cards that they need.

There are three acts: in each, players engage in open trading, challenges, and closed trading among their teammates. At the end of each act there will be a Captain’s Table. At the Captain’s Table the player from each team with the highest card of their teams suit will come together and play a single hand of poker. There is a final confrontation and the Lineage whose Captain won the final Captain’s Table will take the victory and seize control of the night.

Party Poker RPG is not just one game, it is a game system. Just as Role Playing Games (RPG’s) often sport one core rules set with many different possible play settings, so too does Party Poker RPG. In Party Poker RPG you and your friends utilize a custom deck of high quality playing cards as the core component in a fun to play, easy to learn, hard to quit party game. The element that makes Party Poker RPG different from other games which utilize cards is that our cards combine the strategic elements of board games, with the play acting elements of a Live Action Role Playing Game (LARP), and the competitive head-to-head action of a multiplayer video or computer game. This is our first release in the Party Poker RPG lineup, coming soon are Zombie, Werewolf, Wiz-School, and Mafia themed decks and games.

For players of Live Action Vampire RPGs we hope that these decks and game will make it easier to recruit new players, luring them in with simple, easy to learn rules and low stress team play.

If you have more than 30 players you will need assistant Dealers and, unless you live in a mansion, a location to play other than your home. Party Poker RPG is an ideal convention event because of it accessibility and speed of play.

Succubus: the Reborn playing cards will be printed by the world famous United States Playing Card Company, and features 56 standard poker sized cards with custom art designed by Make-Believe to convey a dark, moody, and at times shockingly whimsical depiction of everyone’s favorite creatures of the night … Vampires. Your decks will include all of the following features:

• Custom card backs
• 12 custom designed, face cards
• 4 uniquely crafted Aces
• Custom designed number cards, each one of them unique.
• Hidden symbols on every card: including Rock, Paper, Scissors, and Bomb and more.
• 4, yes 4, custom Joker Cards, one each of the four suits, with hidden symbols.
• Embossed, or “Magic”, finish which both protects the cards and makes them easier to handle and pick up off of flat surfaces such as table tops.
• Bespoke suit symbols on every card
• Custom tuck box

…and for a lucky few of you: your very own likeness, or that of a loved one, or your character, emblazoned upon one of the face cards!

Note: this first edition version of the Succubus cards, using this particular font (and other details) will never be repeated, making them unique and distinctive.“
– Succubus: The Reborn product description