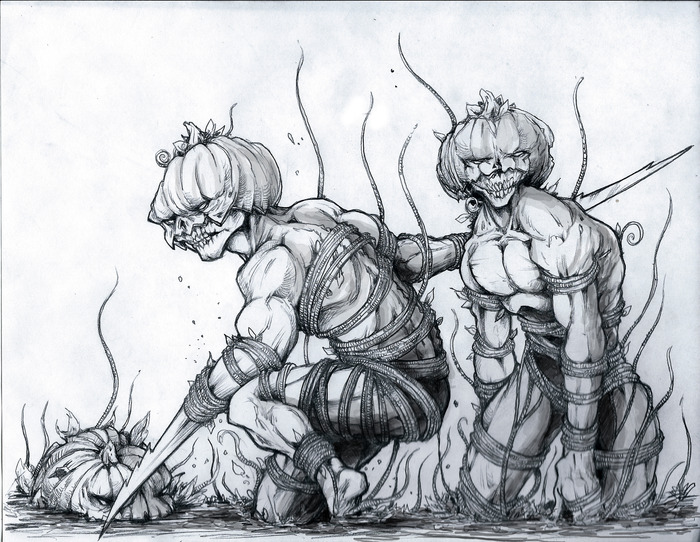 „A plot point campaign and setting for the award winning Savage Worlds RPG based in a modernized version of L. Frank Baum’s Land of Oz.

Pirate Press, in conjunction with Pinnacle Entertainment Group and Savage Mojo presents this adventure setting in a re-imagined and modernized version of L. Frank Baum’s classic World of Oz. The events of Baum’s original stories are a century in the past. The original Wizard and Dorothy are long dead although many of their friends and companions are still around. Players can take the role of a freedom fighter, mercenary, Oz soldier, or countless others to aid or hinder the liberation of the Oz throne.

The Battle for OZ core book contains a complete description of all five major Countries of Oz and numerous cities, towns, and important places of note. It gives the players a rich history to build off of in one of the oldest and most recognizable fantasy settings in American literature with a new modern edge.
Pumpkinhead undead rising from the gravePumpkinhead undead rising from the grave

Battle for OZ has two new optional additions to the Savage Worlds rule-set, frequent and competitive leveling, and a card based random character generation system. Both of these new rule-sets can be applied to any Savage Worlds setting and are designed to do what Savage Worlds games do best, keep the action fast and furious. We have posted three cards below to give you a peek at the random character generation card system. With it, we create fleshed out new player and non-player characters in a matter of minutes!

Battle for OZ also has tons of NPC stats for the major and minor players in Oz, as well as mini-adventures and encounter tables based on what part of Oz the players are traveling through. It has familiar and unfamiliar weapons, gear, and armor, and custom edges and hindrances. Our book has three new custom magic disciplines that include, Technomancy, Scar magic, and Fae magic. Lastly, Battle for OZ has a complete plot point campaign that will take players from novice to legendary. They will have to choose between helping to free Oz from tyranny or helping to enslave the rest of the world beyond it.

Battle for OZ is currently slated to be a full size soft cover book and our current goal will help us pay to have the book polished by Savage Mojo and sent to print. The book is very close to completion, but we will be adding additional content and art on top of what we already plan as the fundraising continues. With your help, we can reach the stretch goals that will allow us to upgrade to a hardback cover and add new content. We also have grand plans to provide you with some great Oz extras like custom bennies and playing cards.“