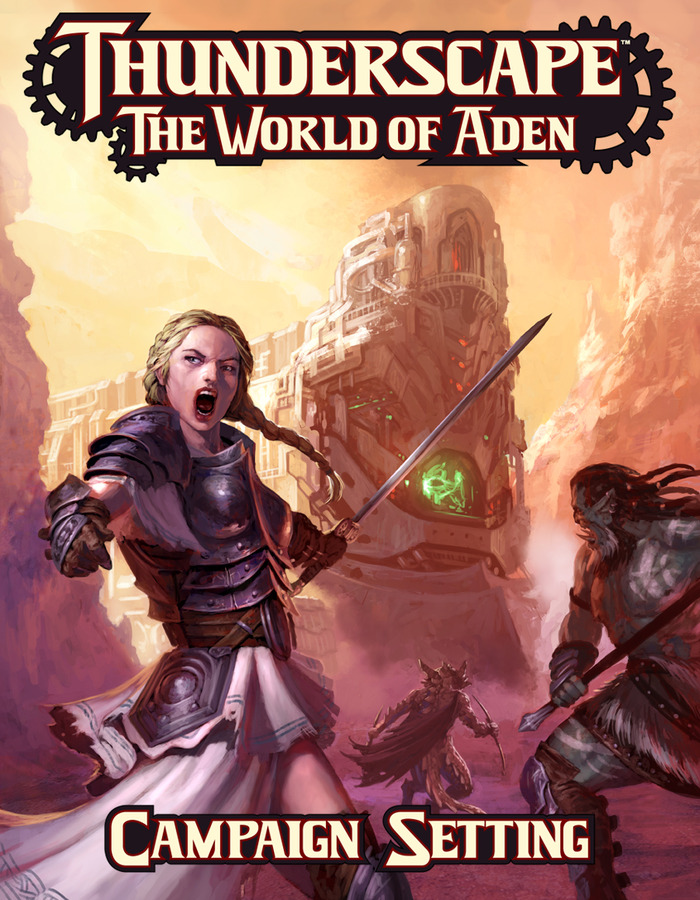 „A setting and mechanics sourcebook for the Pathfinder Roleplaying Game, set in a harsh world of industry, magic, and horror.

Thunderscape: the World of Aden introduces readers to the battered but unbroken world of Aden, a world where knights and sorcerers fight shoulder to shoulder with mechamagical golems against the nightmarish hordes spawned by the Darkfall, a supernatural cataclysm of unknown origin. Ten years ago, the sun was suddenly and unexpectedly eclipsed by an unknown force. Although the darkness lasted only a short time, in those long moments of false night, horrors beyond imagining sprang from every shadow. Beasts long destroyed, terrors that had only ever been imagined, and things that no sane mind had ever contemplated all became suddenly, violently real, and Aden burned. The nocturnals, as these beasts became known, slaughtered countless thousands and put an untold number of villages and cities to the torch. In one instant, the world of Aden was plunged into chaos and anarchy. Having known only peace for more than a thousand years, the nations of Aden were ill-prepared for this ruthless onslaught, and it seemed that the world of the mortal races would perish without ever knowing the cause. But the people of Aden are hardier than that. The world was in the throes of an industrial revolution, with magic and technology being tied together into a strange arcane art known as mechamagic. With this, and with the many other strengths brought to bear by the nations of Aden, the world fights back against the Darkfall and the nocturnals.

The Age of Thunder has not ended.

Aden will not slip quietly into the night.

Wait, Have I Heard of Thunderscape Before?

You may have! The world first appeared in Thunderscape, a PC game released in 1995. A second game set in the same world, Entomorph: Plague of the Darkfall, was released later that same year. In 1996, a series of three novels, entitled The Darkfall, The Sentinel, and Indomitable Thunder, was released, as were two role-playing game sourcebooks. Published by West End Games, these two role-playing supplements, The World of Aden and Campaign Chronicles, were the last appearance of Thunderscape until now.“
– Thunderscape: The World of Aden product description