Mummy: The Curse Core Rulebook, the current Kickstarter for the upcoming new World of Darkness mummy RPG by Richard Thomas and his company The Onyx Path.

Usually, I prefer the old or classic World of Darkness. I supported all Kickstarters of The Onyx Path so far. In my opinion they do a nearly perfect job shipping well produced books. They are all very well done.

As a collector I can compare their books with other limited editions like the Warhammer 40.000 books by Fantasy Flight Games (Rogue Trader, Deathwatch etc.). The Onyx Path uses a better packaging (until now no damaged books!) and all new Vampire: The Masqurade books are significantly better processed. No, I am not getting paid for this. I am a German and I avoid phrases like „awesome“ or „nice to meet you“, if I do not mean it. Until now the Kickstarter books by The Onyx Path are visually and haptically impressive. I have no other words.

Without Richard Thomas there would be no interviews on obskures.de. I asked him something about his new crowdfunding campaign. Some mails later he forwarded my proposal to C. A. Suleiman. The author of Mummy: The Curse gave the following answers to my questions.

obskures.de: Hi C.A. Suleiman, sorry, but I am honest many people (over here in Germany) don’t know you. Please start with a brief introduction of yourself and your gaming experiences?

C.A. Suleiman: I’m an American musician, game designer, and writer. Most people know me for being the developer of Mummy (first The Resurrection and now The Curse), developing the last three iterations of the first fantasy campaign setting (Dave Arneson’s Blackmoor), writing Vampire: The Requiem, writing numerous Dungeons & Dragons books, and for creating the Hamunaptra campaign setting.

obskures.de: Give us an elevator pitch of the upcoming roleplaying game Mummy: The Curse?

C.A. Suleiman: It’s the new World of Darkness RPG from Onyx Path/White Wolf. In it, you play one of the Deathless — a mummy — who has been around for over 6,000 years, thanks to the Rite of Return, the mightiest feat of mortal magic ever attempted. 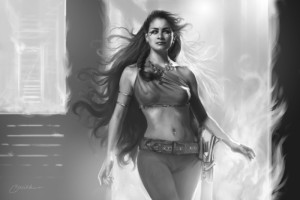 Mummy: The Curse: A Lady? (The Onyx Path)

obskures.de: What do you do as a Mummy and who are their „enemies“? What are the internal and external conflict(s)? (In Vampire (:TM) the Camarilla fights Sabbat and try to keep their humanity, in Werewolf they fight the Wyrm etc.)

C.A. Suleiman: That’s a little too involved to answer well in brief, but the short answer is that mummies have sworn duties that include preserving their lost culture on Earth, serving their mortal cults, and recovering important vessels for return to the Underworld. Because of these duties, they tend to make enemies wherever they go. And amidst all that, they have their own personal goals and motivations to attend, like other people.

obskures: What is the difference to previous „Mummy“ editions and what makes this game for the New World Darkness special?

C.A. Suleiman: Mummy: The Curse could scarcely be more different from its predecessor (The Resurrection). It has a little bit more in common with the very first edition (back when it was a supplement for Vampire), since you play an actual ancient mummy instead of a modern soul with an ancient mummy’s soul fragment, but it is still very much its own game. It’s special because it takes chances that no other World of Darkness game has taken, both in its themes and in its mechanics, some of which are brand new.

obskures.de: Please share some of your inspirations and influences for this project.

C.A. Suleiman: This game, like the other nWoD games, constitutes a return to Gothic form and so it draws on the more classic inspirational sources, along with more recent on-point offerings. To put it in pop culture terms, it’s a lot more Bram Stoker and H.P. Lovecraft than Brendan Fraser and Rachel Weisz.

obskures.de: What is in your opinion the most critical and what is the best part of Mummy: The Curse?

C.A. Suleiman: I’d say the best parts of Mummy: The Curse are its universal appeal — you don’t have to be a fan of Egyptian stuff to enjoy it — and that it evolves the Storytelling System in exciting ways. The „critical“ part is that it’s largely a horror game, which means its tone isn’t a resilient as, say, a cWoD game’s.

obskures.de: You did a lot of work for White Wolf (New and Classic (/Old) World of Darkness), Wizards of the Coasts (Dungeons & Dragons Eberon setting) and you will also publish an Iron Kingdoms novel. Are their any differences working for a corporation like Wizards of the Coasts (Hasbro) or companies like White Wolf/The Onyx Path or Pyr/Prometheus Books. What is the difference of writing a novel or a game supplement?

C.A. Suleiman: Well, they’re very different projects, of course. A novel has to conform to different standards than a pure game reference, and vice versa. As with any endeavor, knowing the form is an important part of executing it well. And individual working experiences almost always come down to the specifics involved; what the project is, who the editor/developer is, and so on.

obskures.de: Can you tell us about your music project Toll Carom and do you use music for your roleplaying groups?

C.A. Suleiman: Gladly, and thanks for asking. Toll Carom is an interstitial (genre-rejective) rock band based out of my city, Washington, D.C. I’m half-Palestinian, so many of my songs are influenced by the rhythms, scales, and motifs of traditional Middle Eastern music, but the format is very accessible (verse-chorus-verse, etc.) and I sing mostly in English. Music has always been important to me, and yes, I incorporate it into every RPG game that I run (or play in, actually). Game Masters who use music to help tell stories and set moods are GMs that I tend to appreciate, as a player.

obskures.de: What do you plan next?

C.A. Suleiman: Well, the first priority is to get through the Mummy Kickstarter project, which is going on now. It’s a very exciting time, but it requires a lot of work, and once it ends, that’s when the real work begins. So, I expect to be busy making sure the future of both Mummy in particular and Onyx Path in general is as bright as it can be. And with the help of fans like you, it looks like it could be quite bright, indeed.

C.A. Suleiman: It’s not an either/or question for me. I’ve written for both continuities, and I enjoy playing both continuities. But since I’m a progressive creative, I’d say my present focus is much more on the new World of Darkness and on the possibilities it holds for the future. 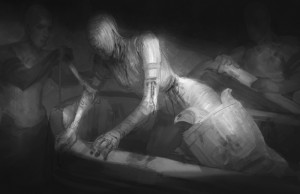 Mummy: The Cures: A mummy awakes (The Onyx Path)

C.A. Suleiman:  I tend to GM/Storytell a lot, so I love to play when I can. But I don’t prefer either, really; I just love gaming in general.

obskures.de:  A design tip for established or upcoming authors and game developers?

C.A. Suleiman: Here’s a tip that’s served me well: Don’t forget to design/write to suit the project and its publisher. Not all good ideas are appropriate ideas. If you can remember that freelance work is less about you than it is about the project, you can go far.

obskures.de: What was your first role playing book and what is your favorite role playing game of all time and in recent years?

C.A. Suleiman: My first RPG book was the 1st edition Dungeon Master’s Guide by E. Gary Gygax. It’s hard for me to pick favorites, but two of my favorite RPGs from the old days are Wraith and Dungeons & Dragons. My favorite RPGs from recent years are Dogs in the Vineyard and Mummy (of course). 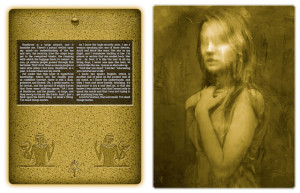 C.A. Suleiman: My favorite fantasy artist is Frank Frazetta. My favorite board game designer is Bruno Faidutti. I don’t have a favorite RPG designer.

obskures.de: Thank you, C.A. Suleiman. Anything else you want to share with the fans?

C.A. Suleiman: Please do support the Mummy Kickstarter, if you can. We want the new WoD games/projects to get as much support as the classic WoD anniversary projects, and that all starts with Mummy. If you want more new material, vote with your pledges. Thanks!

Images:
All images by The Onyx Path Publishing. Used with permission (3rd January 2013)