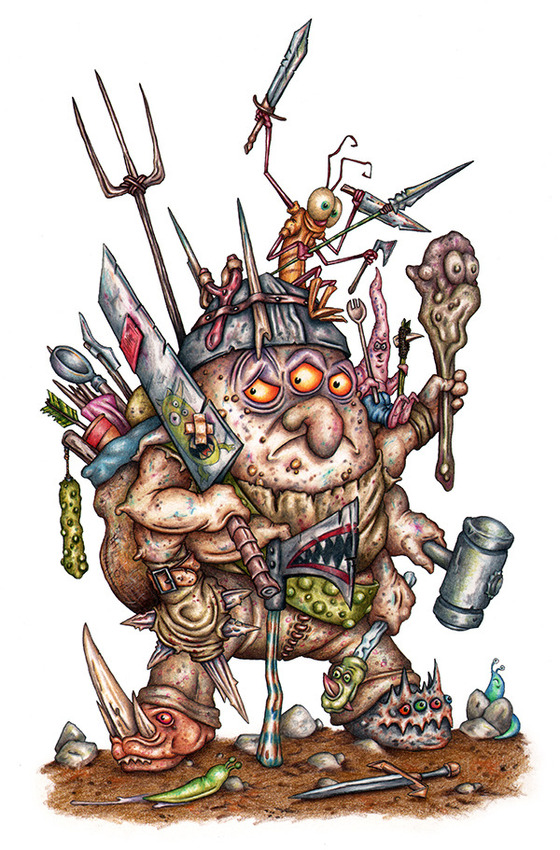 Low Life: The Rise of the Lowly (Andy Hopp)

„A supremely original RPG unlike anything in the history of history. Fun, imaginative, and highly playable.

It was the best of times…

Gazillions of years in the future the vaunted Hoomanrace is extinct and Oith’s dominant lifeforms evolved from cockroaches, snack cakes, and the dregs that survived the various apocalypses in this highly detailed and whimsical tabletop roleplaying game.

It was the end of times.

Spork and Sorcery adventure in a shattered world inhabited by the descendants of cockroaches, worms, snack cakes, and stranded aliens. Discover the arcane secrets of hocus pokery, dementalism, smellcasting, and contanimation. Battle hideous beasts risen from the rubble of ancient civilizations. Enjoy a light lunch at the Primordial Soup Kitchen.

Mutha Oith is a world of grand adventure and deadly peril; a world of conflict and danger. It is a land of epic heroism and great evil, a realm of horror and violence, a bold land where even the lowliest croach can become a king by his own mop and the most wretched gob of filth can become a gawd.

Are you werm enough to follow your destiny? Do you have the nuggets to take your rightful place among Oith’s most valiant heroes? If so, strap on your esophagator hide shield, pick up your battle spork and your big ass cleaver, mount your pygmy slog, whisper a prayer to Jelvis, kiss your larvae goodbye, and open the goosin’ book. The muck-riddled road to epic adventure stands before you…

Why a new Low Life?

This brand new version of the classic Low Life game features all new full-color art, new writing, new magic (danged wrangling and giggity gigging), tons of new Edges, Powers, Hindrances, and skills, new locales, new adventures, new monsters, a new layout, and new everything else. The original book isn’t obsolete, it’s just almost sold out and I feel my skills as a writer and illustrator (as well as my vision for the world of Mutha Oith) have improved and expanded since it was released.

The new version will closely match the hardcover edition of The Whole Hole – A Gadabout’s Guide to Mutha Oith – Volume 01: Keister Island and all the other products in the Low Life family. As an added bonus, I will personally sign and customize every single book that’s backed through this campaign.

Low Life is supported by several related products, including a line of high-quality pewter miniatures, a series of card games and game enhancers, and a horde of other nifty things that will come to fruition if our Stretch Goals are met. You can learn a lot more, and nab yourself some free downloads, at www.muthaoithcreations.com.

Low Life: The Rise of the Lowly uses the fantastic Savage Worlds rules system by Pinnacle Entertainment Group. The Savage Worlds Deluxe rules (less than ten bucks from PEG Inc.) are required to play the game, but not to enjoy the book, which is presented in such a way that all the game related jazz is in the appendices at the back so as not to interfere with the reader’s enjoyment of the story. If we reach the requisite funding level I will also produce a Pathfinder version. 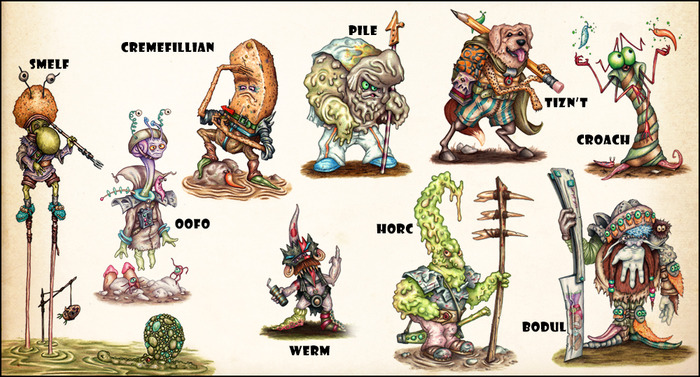 Low Life: The Rise of the Lowly – Species (Andy Hopp)

Bodul: Supposedly the devolved descendants of the extinct Hoomanrace, these guys are uniquely weird.

Cremefillian: The ancestors of these proud and durable peeps were lowly snack cakes, imprisoned and consumed by the hated Hoomanrace.

Horc: These bellicose brawlers came to Oith from Middle Oith during the Time of the Flush.

Oofo: Oofos are the vestigial remnants of ancient aliens stranded on Oith gazillions of years ago.

Piles: Given life through the mucky art of contanimation, these peeps are peculiarly curious and curiously peculiar.

Smelf: Smelves, the hated enemies and favorite prey of their horcish foes, also came to Oith during the Time of the Flush.