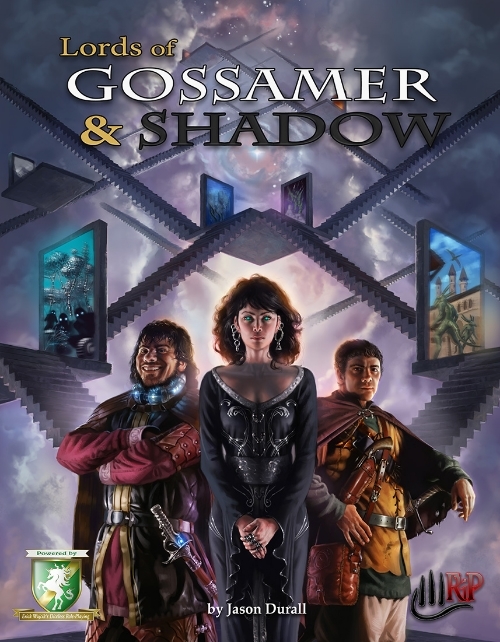 Editing: Perry Grosshans (To Kill or Not to Kill)

This world is but one of untold many, a flux of chance caught between shadow and light. It is a world poised between great powers that shape and define all matter, one of many battlegrounds in an epic struggle between form and cacophony. This is the battle between the creators, shapers, and destroyers of worlds. Welcome to the Lords of Gossamer and Shadow!

Lords of Gossamer and Shadow is an original sourcebook and role-playing game using Erick Wujcik’s Amber Diceless Role-playing, licensed from Diceless by Design. It is a standalone product, but remains fully compatible with the existing rules system and can be readily used in new and existing campaigns.

ENnie award winning designer and Amber Diceless Role-Playing veteran Jason Durall brings you the talent and imagination you’ve seen in his work with Shadow Knight, The Game of Thrones Rpg, and the Basic Roleplaying game.

The manuscript is complete, written and edited. We’ve packed this book with great art from the talented Jason Rainville–Whose fantastic work has recently appeared in the NPC Codex by Paizo Publishing, Lamentations of the Flame Princess, and works by Rite Publishing.

There’s just one problem. When this project began, we projected only a 60-page book. Sixty pages to create the spiritual successor to Amber Diceless Role-Playing. To create an entirely new realm of intrigue and adventure. And then we turned the author loose on it.

What we got back was an additional 100 pages of pure awesome. One hundred and sixty plus pages of adventure.

We knew we had to make this book, no matter what it took, but our resources for Lords of Gossamer and Shadow were spent– and I think you’ll agree, they were spent well. Rite Publishing could wait for months.

We could internally fund the remaining necessary artwork, but we don’t want to wait. We don’t think you want to, either. Artists get busy, new projects come up. We want to lock in Jason Rainville to create the remaining artwork. To keep the same artistic theme. That is the sole purpose of this project– to fund the few remaining pieces necessary to fill out the completed manuscript. With your support, our Kickstarter campaign hopes to gather the resources necessary to present an absolutely gorgeous, unified game that is a joy to play and behold.

With design by Jason Durall, cover art by Jason Rainville and editing by Perry Grosshans, we want to give you a second chance to be a part of a roleplaying legacy. To rescue the project from a purgatory of waiting.

Thank you for your time.

The manuscript is completed and edited, with initial layout near completion, we need an estimated 15+ pieces of additional artwork to complete this project.  100% of the initial goal will go toward purchasing this artwork. A percentage of any money earned over that amount goes to the estate of Erick Wujick via our licensing agreement with Diceless by Design, the current publishers of Amber Diceless Role-Playing. (Special thanks to them for letting us do this project.)