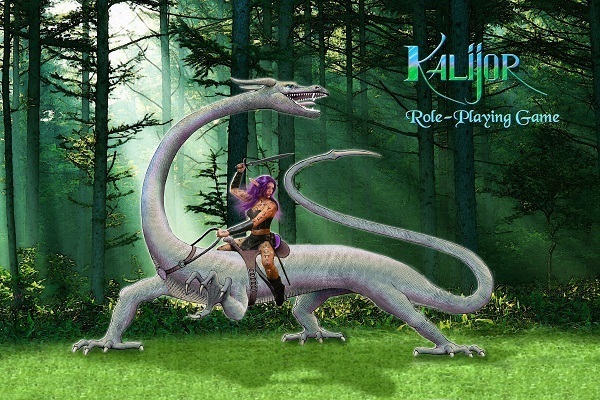 „The Kalijor Role Playing Game project is intended to not only bring the world of Kalijor home to your gaming table, but to help you introduce the concept of pen and paper role playing games to the next generation of gamers.

With the rule engine we’ve built, the system can be increased or decreased in complexity, allowing us to build three different versions of the game, all using the same core rules. This means that young kids, ages 4-7 can play the game (with parental assistance and supervision) and learn to recognize numbers, do basic math, and begin to establish and hone critical thinking and imaginative problem solving skills. We call this the ‚Grow With Me RPG‘ system.
Genetic engineering is commonplace in the future.

For kids ages 7-13, we add in another layer of logistics, giving them more attributes, more bonuses, and more granular control over their character’s progression and advancement. But we still keep the game quick and easy by not bogging them down with the minutia of character generation, tracking experience, leveling up, etc. Character progression is tracked more like a video game with advancement handled by upgrading equipment.

The Kalijor RPG is built on its own, built from the ground up, game engine that allows groups to play with or without dice, depending upon the style of play you and your group prefer. If you choose to play without dice, then the skill ranking system allows the group to decide success or failure of actions and combat, and if you choose to play with dice, then the game will support you with a robust and comprehensive system that will meet your needs.

Combat rolls are made on 2D10, which serves to normalize results and increase the relevance and importance of skills and attributes. A side benefit of this is to make critical success and failure a much more rare occurrence (1 in 56 odds).

The skill ranking system allows for both contested skill rolls and rolls against target difficulties based upon the complexity of the task and situation.

Play as employees of any of the ‚Big Five‘ corporations that make up the Conglomerate, trying to maintain order and harmony, or as the outcast Dissidents, trying to make ends meet on the fringes of society, or strike out against the Conglomerate.
Play a science fiction campaign, a fantasy campaign, or move back and forth between worlds as your story requires. You decide!

Races include (but are not limited to):

In the Future world:

Classes include (but are not limited to):

In the future world:

The Kalijor RPG will be premiering at GenCon 2013 at the G33k & Co. booth in Entrepreneur’s Avenue where we have been awarded an advertising fellowship on the weight of the Grow With Me RPG!

About the world of Kalijor
The human race has moved out among the planets to escape a devastated Earth. Massive corporations control every aspect of life. While nobody who is willing to play by the rules will go hungry, or without a home, there are those who strive to take back their independence from the corporate Conglomerate. Their battles to determine the fate of the human race take place in the real world, in cyber-space, and in the virtual world of Kalijor, a massively multiplayer online RPG that has become a hub of commerce and communication for a humanity spread out across the stars.“
– Kalijor product description