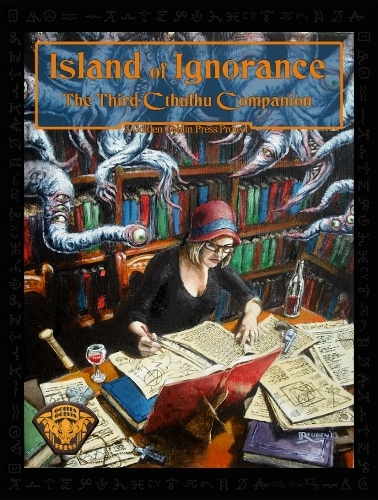 „A collection of shocking scenarios and interesting articles for the Call of Cthulhu Role Playing Game presented by Golden Goblin Press.

Island of Ignorance – The Third Cthulhu Companion contains four articles, a collection of pre-generated investigators, and three scenarios. Additional articles, scenarios, and art will be added as we achieve stretch goals.

Golden Goblin Press has gathered a very talented group of artists for Islands of Ignorance – The Third Cthulhu Companion. Cover and interior illustrations by Reuben Dodd, maps by Alyssa Faden, digital art by Jessica Fisher and layout by Badger McInnes.

The Golden Goblin by Geoff Gillan – Golden Goblin Press, the fictional creation of R.E. Howard, was named after a small Native American figurine. What is this strange object? What does it represent and what powers does it possess? At long last, these questions will be answered.

Requiem for Shaggai: A History of The Devil’s Opera by Scott David Aniolowski – In 1768, an opera about alien beings fleeing a dying world was written. Soon after it was banned by the Pope, all known copies were destroyed, and its composer put to death as a heretic. Learn the full history of the Massa di Requiem per Shuggay as told by the author who originally created it!

When Johnny Came Marching Home by Oscar Rios – This article provides a structured, well-balanced framework for creating investigators who are also veterans of the Great War. There are rules to reflect military training, combat experience, economic hardships, and the detrimental effects warfare had on both the bodies and the souls of Great War Veterans.

Heroes and Heroines of the Lovecraft Country – These eighteen pre-generated investigators have been portrayed by hundreds of players at conventions. Each is a well-rounded, combat-tested, ready-to-play investigator. Also included is a quick checklist of typical investigator equipment and a point system which uses the investigators Credit Rating score. Finally, each has a unique investigator portrait supplied by YOU (see Female / Male Investigator Levels).

Consumption by Brian M. Sammons – The investigators are drawn into a nightmarish sequel to an H. P. Lovecraft story. In Arkham, there are horrors that have nothing to do with ghouls, ghosts, or witches; there are monsters are all the more frightening because of their humanity. It all begins one misty night, on a lonely stretch of road between Dunwich and Arkham, with a horrible discovery. Madness, murder, and mayhem are sure to follow.

Let the Children Come to Me by Mark Shireman – Poor children, workers at a textile mill, are disappearing under mysterious circumstances in Aylesbury, Massachusetts.The children reappear after a few days, each perfectly fine and claiming that nothing happened. Investigators will be challenged to the edge of sanity as they examine whether the horrors of the Mythos are worse than the evils which mankind can inflict upon itself.

The Lonely Point Lighthouse by Oscar Rios – The investigators are hired to debunk rumors of a haunting in New London, Connecticut. The last two keepers at the lighthouse on the tiny offshore island of Lonely Point both quit after hearing strange sounds inside the lighthouse. Before that, the reclusive, but well-respected, Fitch family lived there for twenty years without incident. The investigators are dropped off on Lonely Point with supplies for three days. Can they unravel the mystery as a violent nor’easter rages along the Connecticut coastline?

The Mystery Scenario – This will be an extra scenario PDF that will be provided to all backers at the Private Eye Level or higher. What will this scenario be about and who will write it? No one knows… yet! All backers who support at the Local Politician Level or higher will get a vote on each of the four key aspects of this scenario: Setting, Antagonist, Objective, and Author! Voting will occur after we fund. The chosen author will write a short scenario incorporating the chosen setting, antagonist, and objective.

The voting choices will be (subject to change):

Objectives – 1) Locate a missing person, 2) Recover an item, 3) Survive, 4)Solve a mystery, 5) Disrupt a ritual, 6) Destroy an object or entity, 7) Capture a fugitive, 8) Shut down a criminal enterprise