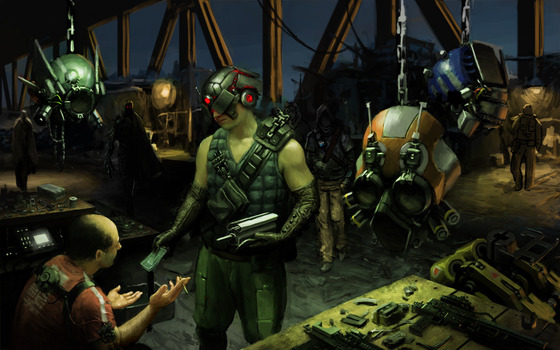 Interface Zero 2.0: Full Metal Cyberpunk is a tabletop RPG powered by the Savage Worlds Deluxe system and currently on Kickstarter.
I am a genre fan of the dark future. Recently, I interviewed Mike Pondsmith, the creator the Cyberpunk 2013 RPG. Among other things he is working on the upcoming video game Cyberpunk 2077. For the moment he is very much occupied with this interpretation of his vision. Do not expect a release before 2015.

A reader of my blog asked me to do an interview with David Jarvis about his sci-fi/cyberpunk game set on Earth in the year 2090. He did not have to ask twice. I was already a backer of the Interface Zero 2.0: Full Metal Cyberpunk Kickstarter …

obskures.de: Hi David Jarvis, Please tell us about yourself and your gaming experiences.

David Jarvis: Hi there! My name is David Jarvis, and I run Gun Metal Games. We’re a small press publisher of role-playing games for the Savage Worlds Deluxe game system. I live in Dallas, Texas with my wife, Suzy, and our dog, Penny. As you might guess, I enjoy watching all types of science fiction shows and movies, though lately I’ve been really hooked on „That 70’s Show.“ It speaks to my „Inner Dumbass.“
Gaming experiences…Wow, you’re asking me to reach way back into my youth! I’m too old for that. I might get a brain aneurism walking those dark paths of deep memory. Like most people, I first got started playing basic in the days of Basic DnD. My first character was a magic user and I picked magic missile, thinking I’d be hurling ICBMS at my foes (Hey, I was only 9 at the time)! I played DnD all the way up until 3.5.
Along the way though I found my true love; the cyberpunk genre. I’m not exactly sure why, but it just speaks to me. Games like Cyberpunk 2020 so rich, so gritty and thought-provoking, that it’s hard not to get sucked into that „life on the edge, living from run-to-run“ sort of game style. I also got turned on to the World of Darkness and had a ton of fun playing my Gangrel and Tremere characters and the occasional Nosferatu. Now though, I play the Savage Worlds Deluxe game system. It’s fun, easy to learn and plays fast at the game table.

obskures.de: Give us a brief overview about your RPG Interface Zero 2.0.

David Jarvis: Interface Zero 2.0: Full Metal Cyberpunk is a re-boot of the popular 1st edition book. The game is set in the year 2090 In this dark and grimy world of corrupt, power-mad government, greedy megacorporations and fringe science-gone-wild, you play ronin: rogue street operatives who make their living doing the things nobody else can, or will, do. You have no master, no loyalties beyond your bank balance. Your only friends are those of convenience. Your tools of the trade are computer code, high-powered weapons, combat drones, cybernetic augmentations, mental powers and maybe even a little bit of luck.

obskures.de: What are the most important inspirations to get the player(s) in the „right mood“?

David Jarvis: It depends on the style of game you’re looking for. Overall, I’d say read as much William Gibson and Neal Stephenson as you can, watch anime like Ghost in the Shell, Bubblegum crisis, A.D Police, and movies like I-Robot, Minority Report, Dredd, etc. 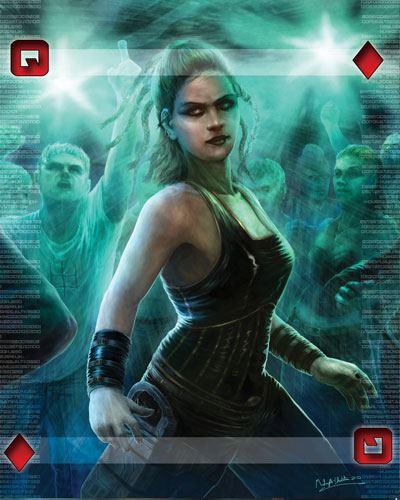 obskures.de: What makes your vision of the Dark Future special? What are the major differences to genre classics like Cyberpunk 2013/2020 or even the urban cyber fairy tale Shadowrun?

David Jarvis: Interface Zero 2.0 is first and foremost, a cyberpunk game setting, but we don’t keep it strictly defined by western concepts of the genre. We embrace Asian influences as well. Interface Zero is like the other games you mentioned, in that we use some of the common tropes—evil megacorps, cybernetics, dystopia—but we look at a very modern version not based on the cyberpunk of the 80’s, but interesting elements of 2013. We think cyberpunk as a genre is always relevant to the world in which we live, and to properly do a new cyberpunk setting, we have to draw from what is happening in technology and global events happening now, rather than two decades ago.

obskures.de: Your game world is based on the Savage Worlds engine. What are the best and what are the most critical parts in your rules variant? I heard your hacking rules are easy and interesting.

David Jarvis: The most exciting rules for me are the new cybernetics rules and the hacking rules. Cybernetics were clunky in the first edition of the book. In 2.0, they are very streamlined and easy to use, which is important, because Savage Worlds is supposed to be a fast game system.
We don’t want you spending hours and hours trying to figure out exactly how to create a piece of cybernetics, or spending all night to hack a computer network. Hacking 2.0 accomplishes two things. It keeps the character with the group, and it feels very cinematic, but still gives you tons of customization options, and more ways to feel necessary within the context of the game.
Hackers have much more utility in a game than in other cyberpunk settings. In Interface Zero 2.0, the hacker can take control of vehicles, or security cameras with a couple of rolls of the dice rather than having to get into a very lengthy „mini game.“ They can even hack other people and do things like erase memories, or shut down other character’s weapons.

obskures.de: Hardcore Cyberpunk games avoid magic/psi etc.. Your game includes such elements. Why did you do this?

David Jarvis: Well, to be blunt, why not? I feel that psionics are sufficiently sci-fi enough to merit inclusion in the book, especially the way we handle them. Psionics are not just an afterthought in the game, even though they are a relatively new phenomena in terms of the setting’s history. Some of the more hard core cyberpunk enthusiasts might object to psionics, but I personally don’t want to restrict this game to one particular vision of what cyberpunk is and isn’t.

obskures.de: There is a renaissance of the Cyberpunk idea in recent years. In geek culture you can see the references very often. What is your opinion on this new wave of Cyberpunk?

David Jarvis: I say bring it on! Everything I’ve seen in recent years takes advantage of emerging technologies and updates the genre really helps people visualize a world where this sort of thing might be possible, much moreso than the movies of the 80’s. 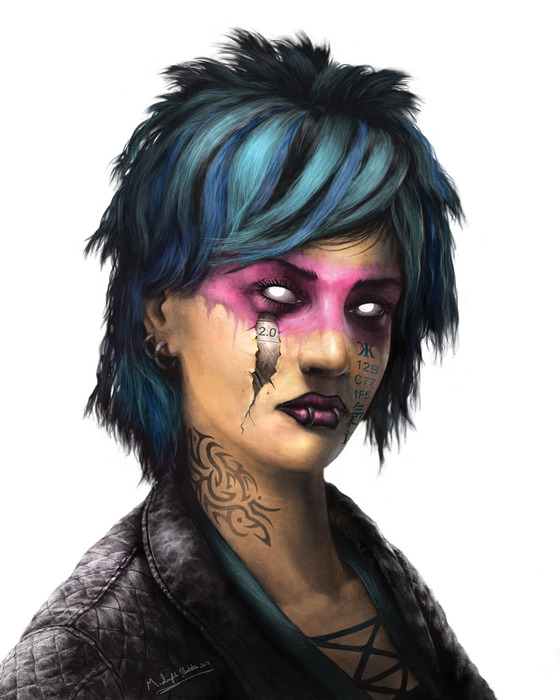 obskures.de:„… If you enjoy Gibson’s Burning Chrome, Neuromancer, Count Zero and Mona Lisa Overdrive, Williams’ Hardwired, Noon’s Vurt and McAuley’s Fairyland then I hope this game is for you. You should read them. Those books, and this game, are not about “teams” of “runners” loading up on tech from “MetalBookIV” or Min|Maxing every damage die and +2s out of guns|gear while marking in 40 boxes of damage. Fuck no …“ (from the Cyberpunk indie RPG “Remember Tomorrow” by Gregory Hutton). How would you describe your game in relation to this statement?

David Jarvis: This seems like a loaded question, but I’ll answer it anyhow. Interface Zero 2.0 is an action-oriented cyberpunk setting. We encourage people to read the afore-mentioned fiction, but when it comes to creating characters and tweaking them to get the best out of them, I’ll have to disagree with the above comments. It’s not my job to tell you how you should play this game, and it’s certainly not my place to exclude those people who have different play styles.
Some people like tweaking the numbers to get the most out of their characters, and some don’t. Who are we to say one play style is better than the other? Instead, I’m determined to make a game where everyone has fun.

obskures.de: New game companies nearly every day. crowdfunding (Kickstarter), the tabletop RPG community is growing older and older. Electronic tools on PC, tablets and smart phones are coming. What is your perspective on the changing market and community?

David Jarvis: Kickstarter is really great in that it helps small publishers like myself fund a project without taking out a second mortgage on my house. Yes, the average gamer is getting older, but I think there are a lot of younger people out there who are getting interested in the hobby. As long as publishers continue to take advantage of emerging technologies to make their games better, the industry will be fine. 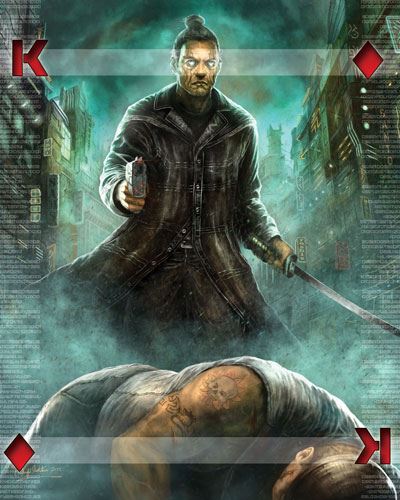 obskures.de: Your favorite role in a Cyberpunk game?

David Jarvis: Be open with your audience. The Age of the „cloistered“ game designer is ending. Your fan base will appreciate being included in as much fo the process as possible.

obskures.de: What was the first role playing game you bought?

obskures.de: What is your favorite game (video, board, etc.) of all time and in recent years?

David Jarvis: Of all time? Hmm. I’d have to say World of Warcraft followed by Baldur’s Gate. In recent years, though, I’ve really enjoyed Deus Ex and Syndicate. Star Wars, the Old Republic was cool for a while, too.

David Jarvis: favorite Game designer? Hmm. There are so many great ones out there. Steve Kenson and Stan! Brown are inspirations, but right now I’m really enjoying the stuff my line developer, David Viars, is doing. In terms of artwork, Sam Manley, Todd Lockwood, Jeff Easely…wow.. too many to mention.

David Jarvis: I always get ideas. My mind never really shuts down in the creative department.

obskures.de: Thank you, David Jarvis. Anything else you want to share with the fans?

David Jarvis: Check out our Kickstarter!


You want more? Enjoy the R-rated: A Night on the Town or even better join the fast and furios Full Metal Cyberpunk of Interface Zero 2.0!