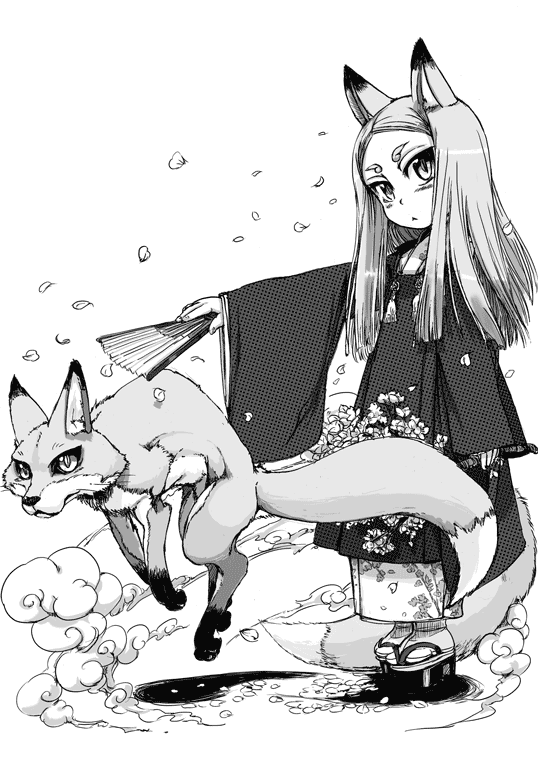 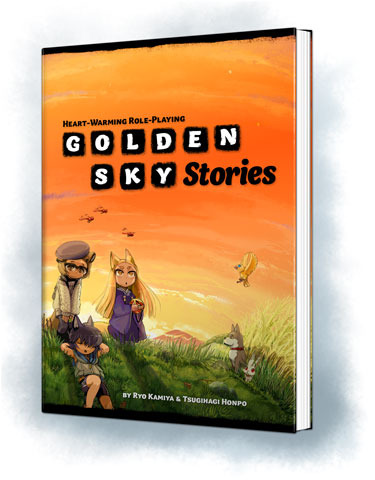 Golden Sky Stories is a heartwarming, non-violent role-playing game from Japan, by Ryo Kamiya, the creator of Maid: The Role-Playing Game. It was originally published in Japan as Yuuyake Koyake, and we’re very pleased to finally be able to bring it to you in English!

In this game, players take on the role of henge, animals that have just a little bit of magical power, including the ability to temporarily take on human form. You can be a fox, raccoon dog, cat, dog, rabbit, or bird, and each kind has their own special magical powers. Players will then attempt to solve problems around a small enchanted town with ingenuity, co-operation and friendship. The book is going to be about 144 pages, and will feature all of the beautiful artwork from the original version by the exceptionally talented manga artist, Ike.

Contributions of $10 or more will get you the PDF of the game and of any material from stretch goals we reach, and contributions of $25 or more will get you a printed book as well.
As of this writing, the translation is finished, and our graphic designer, Clay Gardner (who you might recognize as the creator of the OVA: Open Versatile Anime RPG) has already finished the layout. The aim of this Kickstarter is to fund the first print run. Our goal is to do a run of 500 copies, but if we exceed our funding goal we’ll print more and if feasible bring the retail price down and provide backers with more goodies. Golden Sky Stories will also be the first release from Star Line Publishing, and we’re aiming to publish more translated Japanese games, not to mention our own original works. By pledging you’ll not only help Golden Sky Stories come out, but also help us launch something that will become a bridge to bring lots of other great games here from across the Pacific!

The original Japanese version of the game was 120 pages in B5 format (7.17″ x 10.12″). The English version will preserve the formatting of the original as much as possible, but the page count will be a little higher with the addition of some cultural notes to help Western readers better understand the game’s Japanese setting and mythology.

The book has all the information you’ll need to play. It includes rules for playing as the six different types of henge (foxes, raccoon dogs, cats, dogs, rabbits, and birds), play advice, a complete replay, a selection of NPCs with story hooks, and two introductory scenarios.

If you’d like a sneak peek at what the game is like, check out the free original replay and the Tabletop Day 2013 demo game we created!