Freeport: The City of Adventure for the Pathfinder RPG. Since the first d20 module, Death in Freeport, I want to invest in this setting full of pirates, cultists and snake people.

I really like the second edition of the Warhammer RPG, the Dragon Age RPG and the A Song of Ice and Fire RPG, but never was a fan of Dungeons & Dragons, d20 or the so popular Pathfinder RPG.

Freeport: The City of Adventure for the Pathfinder RPG: Original covers (Green Ronin)

obskures.de: Hello, Chris Pramas, please introduce yourself and tell us about your gaming experiences.

Chris Pramas: I am the founder and president of Green Ronin Publishing, the creator of Freeport: The City of Adventure, and the designer of such RPGs as Dragon Age and Warhamer Fantasy Roleplay, 2nd Edition.
I got into gaming in 1979, when I was 10 years. Like many people, my first game was Dungeons & Dragons. I naturally started to read Dragon Magazine and that was my entry point to the wider world of hobby games. I read about other RPGs, wargames, miniatures games, and so on, and that began a journey of exploration that continues to this day. My friends joke that I’m a hoarder because my home office became non-functional about 7 years ago. It’s too stuffed full of games and miniatures for me to actually work in there anymore!

obskures.de: How would you briefly describe Freeport to a new customer or fan?

Chris Pramas: Freeport is an island city that can be dropped into any fantasy campaign setting. It’s built on the rement of a great serpentman empire, and has pirates, cults, and plenty of other adventuring fun. Freeport is a great home base for a group of PCs because there’s plenty to do in the city itself, plus it’s easy for the players to have nautical adventures as well.

Chris Pramas: My basic idea was to take classic fantasy setting elements and combine them with pirates and Lovecraftian horror. It’s a pretty unique mix that allows for adventures of many different types. You can do Call of Cthulhu style investigations, dungeon crawls, swashbuckling nautical stories and more.

obskures.de: Green Ronin has its own game systems – like the widely accepted AGE engine from the Dragon Age RPG and also announced a Freeport Companion for Fate Core. Why do you offer now Freeport: The City of Adventure for the Pathfinder RPG on Kickstarter?

Chris Pramas: Freeport was created at the dawn of the d20 era. At GenCon 2000, the D&D 3E Player’s Handbook came out and so did my Death in Freeport adventure. For many years, Freeport was a specifically d20 city, though we later broadened it out to other systems as well.
We decided to make this a Pathfinder project because we want to bring Freeport back, and we thought the largest concentration of our fanbase was now playing Pathfinder.

obskures.de: The 512-page full color hardback for the Freeport city setting will include new locations, new NPCs, new monsters, and new adventures, powered by the Pathfinder rules. Can you say a bit more about the book?

Chris Pramas: We’re basically starting with the previous core book, The Pirate’s Guide to Freeport, and revising and expanding it. So it’s basically all the stuff people liked about Freeport, but more of it. Since we are doing the system and setting in one book, we can do things like include good-sized starter adventure right inside.
The other thing is that we’re committing to doing this is a full color back from the outset. Since previous Freeport books had small color sections at best, this means we’ll be commissioning a huge amount of brand new color art. Really, I just want this to be the Freeport book I always dreamed about.

Freeport: The City of Adventure for the Pathfinder RPG: Original covers (Green Ronin)

obskures.de: This project is a collaboration with the Fiery Dragon company. Who are they and what is the reasoning for this division of work?

Chris Pramas: Fiery Dragon is another company that came out of the d20 boom. They were part of White Wolf’s Sword & Sorcery studio for many years, and did some very cool stuff. I knew that with our existing commitments, it would be difficult to get a book of this size done with my staff alone so partnering up with someone seemed like a natural idea. We’ve been friends with the Fiery Dragons guys for over a decade now and we like their work, so they were the first company I approached. 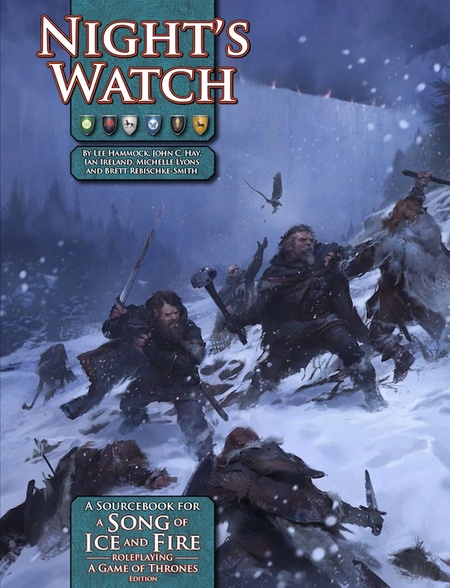 obskures.de: Green Ronin announced supplements for the licensed RPGs A Song of Ice and Fire and Dragon Age. The fans eagerly wait for the Dragon Age Set 3 and more Game of Thrones stuff. Any news regarding these game lines?

Chris Pramas: Ice and Fire fans just got the Night’s Watch sourcebook. It’s a great book that gives you two new ways to play the game. Instead of creating a noble house to be the center of your campaign, you can create a Night’s Watch castle on the Wall or a Wildling village beyond it. Next up is a starter set. We want to give new fans of the books and show an easy entry point to the RPG, so the starter set will a lot more newb friendly than our big core rulebook.
For Dragon Age, work on Set 3 continues but is getting to the end at last. I hired a new developer for the line, Jack Norris, and that was been a huge help.

obskures.de: Green Ronin also indicated a new, not licensed fantasy game with the AGE engine. Any news or can we expect more details before Gen Con this year?

Chris Pramas: Yes, we should announce it at or before GenCon.

obskures.de: How do you perceive the hobby community and industry at the moment?

Chris Pramas: I sometimes joke that the game industry is the real “grim world of perilous adventure,” but these are interesting times. I feel like we might be beginning a RPG renaissance. Next year is D&D’s 40th anniversary, so that’s going to put roleplaying in the public eye. We’ve also the rise of nerd culture to the mainstream over the past decade and the things like Felicia Day’s Geek & Sundry channel and Wil Wheaton’s TableTop show. I hope I’m right!

Chris Pramas: The most fun you can have with your pants on.

Chris Pramas: As in, which one do I like best or which one would I like to live in? For the former, I’m going to say the Old World. I have such a long history with it and doing WFRP2 was a dream project. I wouldn’t want to live there or in Westeros though. Ferelden seems like the better bet. There’s only a Blight every few hundred years. :)

Chris Pramas: I guess John Constantine doesn’t really count as a superhero. My recent fave has been Captain America. I’ve been reading Ed Brubaker’s run on Cap and it’s terrific.

Chris Pramas: I love to play but I usually end up game mastering.

Chris Pramas: A good game should have a clear concept, be easy to get into, reward repeat play, and above all be fun to play. Ideally, it should also add something new to what’s come before.

Chris Pramas: Hit your deadlines. If you just do that, you can get plenty of work.

Chris Pramas: Pendragon stands as my all-time favorite. It such an amazing piece of work.
The recent game that most screamed “play me” when I read it was Icons. This is sort of cheating in that designer Steve Kenson works for me but Green Ronin did not publish Icons and has no stake it. It’s all Steve and Icons is a great light superhero RPG.

obskures.de: What is your favorite board and/or video game of all time and in recent years?

Chris Pramas: I love Avalon Hill games. They are my wargaming roots and I’d say the original Squad Leader is still my favorite. More recently, I love Richard Borg’s Command & Colors system. It powers a bunch of different games from different manufacturers and they are all worth getting. I’ve played the WWII version, Memoir ’44, the most. Command & Colors Ancients, Battle Cry, and the recently released Samurai Battles are just as good.
I am a slut for BioWare’s video games. My all-time favorite is still the original Knights of the Old Republic. Recently, Dragon Age: Origins. I played through it six times and that wasn’t just for research.

Chris Pramas: My favorite RPG designer is Greg Stafford, who not only designed Pendragon but so much other great stuff over the years. Of recent designers, the one most after my own heart is Rob Schwalb. He worked for me for many years and is now working for WotC on the new edition of D&D.
I can’t really pick a favorite artist. Too many great ones to narrow it down!

Chris Pramas: …I’m in the shower or on a long drive.

obskures.de: Thank you, Chris Pramas. Anything else you want to share with the fans?

Chris Pramas: We’ve got two weeks left on the Freeport Kickstarter. If any of your readers can help spread the word that would be awesome. Thanks!

By the way: I never expected some of the answers. John Constantine is coolest „superhero“ ever and Ed Brubaker’s Criminal is a must-read for any comic reader.

Pathfinder might not be my style, but many other gamers love this game. Hopefully the stars are right now and Freeport wakes up and rises with your help.