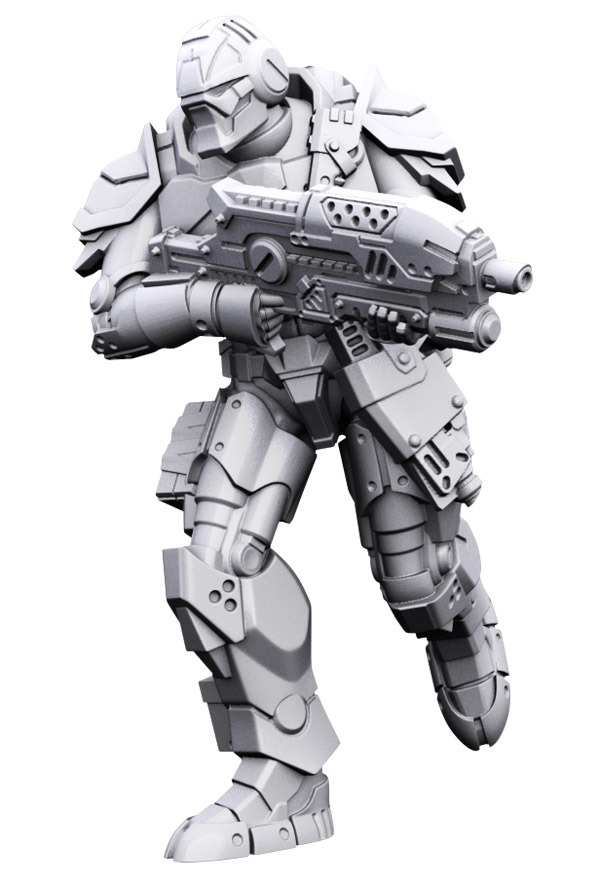 Welcome to Deadzone – the Kickstarter campaign for the Skirmish Game set in the Warpath universe!

Players control one of four unique factions, battling it out over scarce resources by combining deadly actions to lethal effect. The sci-fi backdrop of Deadzone is brought to life using the new modular Mantic Scenery Range adding a vertical dimension to your games and incredible customisation to your battlefield. No game need ever look the same!

By backing this Kickstarter you will be allowing us to create four brand new factions of miniatures – The Enforcers, Plague, Marauders and the Rebs – as well as an exciting game box that includes plastic sprues of our great new Scenery.
The Game

– Modular 3D Environment: Deadzone is played using a flat, grid-based gaming mat that can be built up using Barricades and Buildings from our modular plastic Sci-fi Scenery Range.

– Equipment and Loot: Upgrade your troopers by collecting equipment and new weapons from the Battlefield, such as machine guns, medi-packs, grenades and more. But beware – you could be triggering a booby trap!

– Player Progression and Experience: Grow your team across the war as individual soldiers earn experience and advance through ranks, acquiring new abilities and awesome new weapons.

The Enforcers are the Council of Seven’s elite peacekeepers, dispatched to tackle threats that are beyond the scope of regular military units. Each Enforcer is a superior soldier, trained in countless forms of combat and equipped with the best technology available.

There have been increasing reports of a terrifying virus unleashed by alien artefacts scattered across the Expansion Zone. Each primary victim is twisted into a brutal colossus hell-bent on spreading its contagion to new hosts. These second-generation victims suffer the same mutation to a lesser degree, becoming less massive but no less deadly.

The Corporation sells itself as a utopian society, but there are those among its citizens that disagree. For these free-thinkers, anarchists and dissidents there will always be the welcoming arms of the Rebellion. Following a crushing loss against Corporation forces thirty years ago, the Rebs have been slowly rebuilding their numbers, taking on recruits from alien races who share their grievances with the Council.

The Marauders, trained by the Corporation as shock troops but defying their rule, are a terror of the shipping lanes, known for attacking cargo haulers and pillaging spaceports. They see a Deadzone as an opportunity too great to pass up, even if they have to fight their way through a fleet blockade to reach one.

Figures are supplied unassembled and unpainted in coloured plastic.

Deadzone is played amidst an urban warzone and includes a flat highly detailed gaming mat and sprues of our plastic Sci-fi scenery, allowing you to create a fully interactive 3D gaming environment!

The sprues are based on a 3″x3″ template, allowing you to assemble them in an infinite number of combinations using our innovative connector system.

Scenery Sprue Sample – contents may vary. We expect to have up to 6 tiles per sprue. This is a sample mock-up.

You can customise your buildings using the large number of cool accessories such as railings, barricades, crates, barrels, ladders, supports and buttresses.
Scenery sprues are supplied unassembled and unpainted. Made in plastic.“