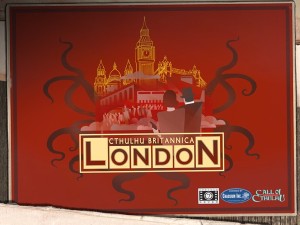 Cthulhu Britannica: London for the Call of Cthulhu RPG (provided by the Cubicle 7 Entertainment Ltd.)

Cthulhu Britannica: London – Call of Cthulhu RPG boxed set. After a short break my blog is back with a Dominic McDowall interview, the owner of the british game company Cubicle 7 and the creator of this interesting Kickstarter for the great old Call of Cthulhu RPG.

You might already know Cubicle 7 by their other prominent and award-winning titles like Doctor Who: Adventures in Time and Space, The One Ring and not to forget their cool translations of French games like Qin – The Warring States, Kuro and Yggdrasill.

To be honest, at the moment I am tired of Kickstarter and the crowdfunding phenomenon, but sometimes there are gems like the Cthulhu Britannica: London – Call of Cthulhu RPG boxed set. These projects still draw my attention. I already interviewed Cubicle 7’s fantastic Art Director Jon Hodgson (someone who likes Dust Devils must be fantastic!) and this time Dominic McDowall, the Big Boss himself, answered some of my questions about their Cthulhu Britannica: London Kickstarter campaign. Enjoy!

I love boxed sets and the opportunity they give us to include all sorts of cool things like maps and handouts. The Cthulhu Britannica: London boxed set includes a guide to London in the 1920s, A Keeper’s book and a scenario book, plus a load of period and newly-commissioned maps and handouts.

By launching the project as a Kickstarter, we have also added in some additional add-ons, extra products that unlock as the funding campaign progresses. These include a huge (and growing) Campaign Book to accompany the boxed set, a lovely box of postcard-style adventure seeds written by a host of our talented contributors (including Sandy Petersen, Ken Hite, Graeme Davis and Robin Laws to mention but a few) with an accompanying book, a set of beautiful large-format cards featuring a load of valuable game information, investigator Neve Selcibuc’s journal – an in-world artefact of Neve’s discoveries in London, a World War Cthulhu cross-over book and more.

One of the exciting things in the project is that backers can see their work in print! The Postcard Boxed Set will feature adventure seeds contributed by backers to the project, so it’s a lovely opportunity to really get involved.

Why did you pick London as the setting? There is already some London game material (e. g. The London Sourcebook by Chaosium, Bookhounds of London for Trail of Cthulhu by Pelgrane Press) available. Are there any similarities between your Cthulhu Britannica: London and these other projects?

London is a huge and fascinating city, and I’ve spent a good part of my life there, so I think it’s a combination of the wealth of material we can work with and the desire to explore the city from a Mythos perspective. The time period is a fascinating one for London too, looking at the beating heart of an empire in decline. It’s such a large canvas that there’s plenty of scope to take a fresh look at the place from a gaming perspective.

As our Cthulhu Britannica line is focussed on the UK in the 1920s, it would not be a complete without a visit to London. 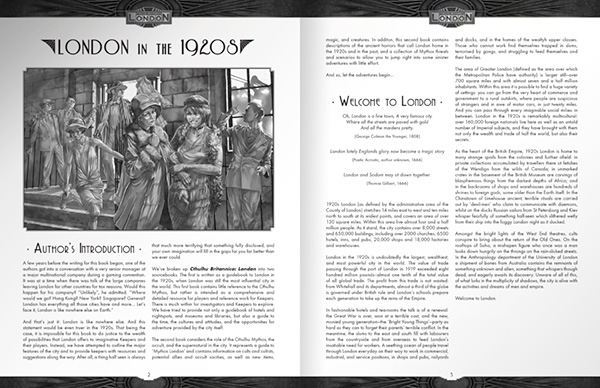 On the production side does your boxed set follow previous examples? There are some nice Call of Cthulhu „vanity“ items like the old Orient Express Campaign or even the impressive French Collector’s edition of Beyond the Mountains of Madness.

There are some gorgeous examples to follow, aren’t there! My aim is to produce a beautiful and accessible boxed set – a deluxe product that is still within the price range of the average gamer.

Who is or will be working on the main project (authors, artists, etc.) and the unlocked campaign book? The stretch goal postcard list reads like the who’s who of the roleplaying industry (Sandy Petersen, Robin D. Laws, James Wallis, Chris Pramas, etc.)

I’m so excited by all the contributors we have involved, it is an honour to work with each and every one of them. There are still some names to reveal, but it’s great to have some of the guys who worked on Call of Cthulhu 7th Edition, including Mike Mason (Call of Cthulhu Line Editor) and others taking part in the Campaign Book. The bulk of the Guide to London has been written by David Wade, David Walker, Marc Torley and Alastair Montgomery – long-time inhabitants of London and very experienced London storytellers and Keepers. They have been writing and running games set in London for over five decades between them, and are walking encyclopaedias of both the everyday facts and weird legends of the capital.

Maybe „Pearly King in Yellow“ is a hint? Can you tell us a bit more about the scenarios or the campaign.

There are two books featuring full scenarios. The first is the Scenario Book included in the core Cthulhu Britannica: London boxed set. This will contain at least three stand-alone scenarios – more may be added as funding grows. The second is the Campaign book – a hardcover volume of scenarios that form part of a complete campaign. I think we’ve got five parts at the moment, and that number will grow with funding – I can’t wait to see how big it grows by the end!

If you have to pick „one thing“ from the project. What are you most excited about?

One of the things that I have loved about the project has been the opportunity to get to chat with people, find out what they love about Mythos gaming and to see them getting excited about what we are doing. Kickstarter really brings you together with your supporters, and it has been a lovely experience.

I’m really excited by the breadth of the project too – all the cool stuff we can work on and get out to people. My main goal is to deliver products to our backers that will absolutely delight them.

There is at least one New York Times best-selling author waiting in the wings for stretch goals to unlock them!

Your first Kickstarter is and will be a success. What do you think about crowdfunding? Do you have any other projects in the pipeline?

I have really enjoyed the Kickstarter so far! It has been great to have that level of interaction with people, and humbling to receive all that support. Crowdfunding is a fantastic opportunity to do the things that would be difficult or impossible through the usual route. We have plans, and I’ll make sure you’re one of the first to know!

Thank you for the interview. Anything else you want to share with fans?

Thanks for your support, and if you haven’t already, come and check out the Kickstarter. We’ve also recently announced a beautiful limited edition hardback rulebook for our Doctor Who game, which I’m very excited about. And if you’re in London on 7 December, come along to Dragonmeet and hear Steve Jackson and Ian Livingstone CBE talk about the early years of Games Workshop, get your Lone Wolf books signed by Joe Dever, play games, visit the traders and much more!

So, some days left to support their Cthulhu Britannica: London Kickstarter with all these „Mythos secrets to terrify, enthral, and immerse you in the glamour and smog of the capital of the Empire“.

PS: Shameless propaganda?! If you have a Kickstarter fatigue like me, at least get their World War Cthulhu campaign book. I skipped the rules part and started directly with the campaign. I like the „resistance setting“ and the story a lot. The team has to make some tough choices … (No, I don’t get paid for this. I pre-ordered the book … Maybe one day there will be another interview about the „other games“ by Cubicle 7.) „Ph’nglui mglw’nafh Cthulhu R’lyeh wgah’nagl fhtagn„