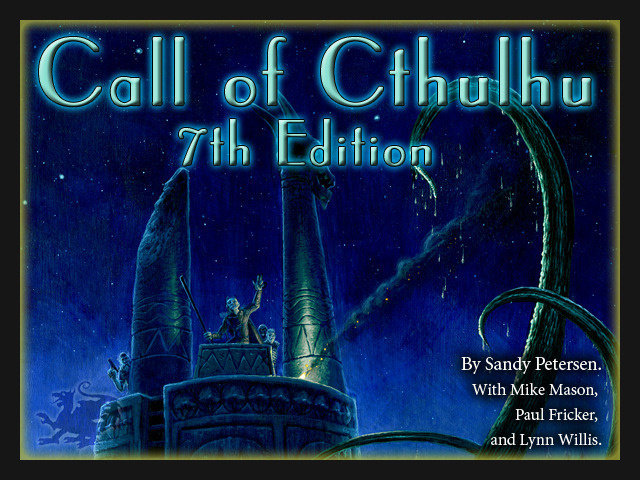 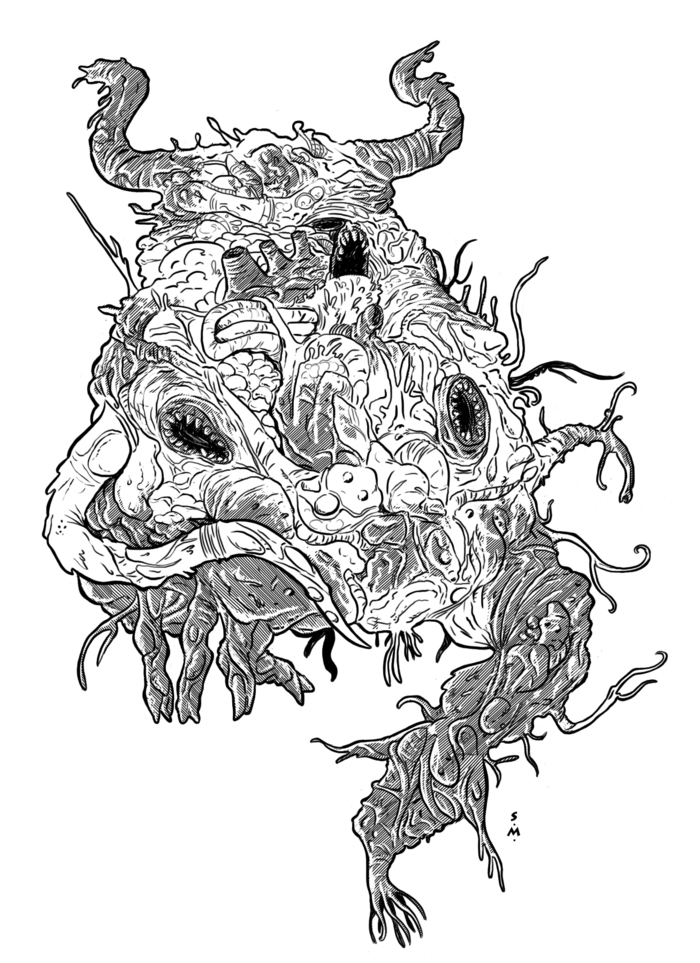 „Call of Cthulhu is an award-winning roleplaying game, first published in 1981. The 7th Edition will have updated rules and new content.

WHAT IS CALL OF CTHULHU

The Great Old Ones ruled the earth aeons before the rise of humankind. Originally they came from the gulfs of space and were cast down by even greater beings. Remains of their cyclopean cities and forbidden knowledge can still be found on remote islands in the Pacific, buried amid the shifting sands of vast deserts, and in the frigid recesses of the polar extremes. Now they sleep — some deep within the enveloping earth and others beneath the eternal sea, in the drowned city of R’lyeh, preserved in the waters by the spells of mighty Cthulhu. When the stars are right they will rise, and once again walk this Earth.

CALL OF CTHULHU is Chaosium’s classic roleplaying game of Lovecraftian horror, in which ordinary people are confronted by the terrifying and alien forces of the Cthulhu Mythos. CALL OF CTHULHU uses Chaosium’s Basic Roleplaying System, easy to learn and quick to play. This bestseller has won dozens of game-industry awards, is a member of the Academy of Adventure Game Design Hall of Fame, and was voted the #1 Gothic/Horror RPG of all time by the GamingReport.com community. CALL OF CTHULHU is supported by a growing line of high quality supplements.

This Kickstarter project aims to build a new edition of this classic horror game and expand its award-winning tradition.

As currently envisioned, the CALL OF CTHULHU KEEPER’S RULEBOOK is a new edition of the CALL OF CTHULHU rules incorporating new options, an improved flow of combat, new scenarios, and a cleaner page layout with box and page decoration evocative of the primary period of play in the 1920s. Here are eighteen chapters including H.P. Lovecraft and the Mythos, Creating Investigators, Skills, Game System, Combat, Chases, Sanity, Magic, For Keepers, Tomes of Eldritch Lore (with over 100 tomes), Grimoire (with over 100 spells), Artifacts & Alien Devices, Monsters, Beasts & Alien Gods, three scenarios, plus a reference chapter containing Lovecraft Country, Historic Timelines, Mythos History of Earth, Sanity Quiz, Play Aids, and more. The „Skills“ chapter contains full descriptions for each skill, including guidance on opposed skills, setting difficulty levels, examples of how to „push“ the different types of skills, and suggested consequences for failing a pushed skill roll. The „Chases“ chapter provides rules for all types of chases, whether on foot, driving a car or boat, flying airplanes, or being pursued by monsters.

We also wanted to address the players directly, and simultaneously we will also release the INVESTIGATOR HANDBOOK, intended for all players, which includes ten chapters expanding Creating Investigators with optional background packages, more than a hundred Occupations, Skills, Investigator Organizations (nine separate organizations described – The ‚Wipers‘ Pals, Wrath’s Circus of Wonders, Strange but True!, The South 13th, SKT Research, Novem Angelus, Ratched’s Children, The Resurrectionists, The Society for the Exploration of the Unexplained), Life as an Investigator, The Roaring Twenties, Advice for Players, plus a references chapter. „Life as an Investigator“ takes a look at investigative procedures and equipment, and also provides examples taken from the files of the Theron Marks Society.

These two books are offered in two bindings: a perfect-bound 8.5×11″ paperback format including a color cover with new cover art, black & white text, re-imagined with new illustrations and page design throughout; and hardcover copies of both books with the cover illustration laminated to boards and and finished with a gloss varnish.

We have in mind a number of improvements we can offer if we can reach our initial goal, and push beyond.

When Will It Come Out?

We want to have these books in your hands by Halloween (October 31) of 2013.
The rule book has been fully revised and carefully restructured to bring you the rules in the most user-friendly way. Call of Cthulhu is a well established game with a wealth of supporting scenarios, campaigns and source books. It’s important to note that the 7th Edition rules remain backwards compatible so that previously published scenarios and source books all remain playable with the revised rules. We’ve gone to great lengths to revise the rules in a way that retains the essence of what makes Call of Cthulhu such a great game.

Creating your Investigator
There are lots of great options for creating investigators, along with advice on integrating your investigator with the story. It also provides you with support and tools for generating an investigator’s backstory, enabling players to create fully rounded characters with a reason to investigate the Cthulhu Mythos.

Skill rolls
Not everything is so easy for the investigators — if they attempt an especially difficult task the new rules introduce the ‘hard’ and ‘extreme’ skill rolls. Revised skill descriptions and new skills like Intimidate and Charm have been added to provide investigators with more ways to investigate and uncover the secrets of the Mythos.

Opposed rolls
No need to refer to charts — everything you need is right there on the character sheet!

Pushing skill rolls
Sometimes your investigator fails a task. With the new rules, if you want to try a second time you can — if you can justify it! But beware — failing a second ‘pushed’ roll will have dire consequences — opening the door for the Keeper to take the story in all sorts of new, exciting and sometimes unexpected directions.

Lots of Advice for Players and Keepers
The new rules have been written with a mind to helping all players get the most of Call of Cthulhu. Particularly, a special advice chapter for Keepers on how to construct a scenario, how to build tension and horror, and how to develop the story and engage your players. Whether you are new to the game or have been playing a while, there’s information and tips for everyone .

Toolkit
Over the decades many gaming groups have developed their own style of Call of Cthulhu play, and 7th Edition provides you with options, tools and advice on how to tailor the game in a way that will suit you and your group. Whether you like things more pulpy or gritty, there’s optional rules to build and scale the game you want.

Missed a clue? No worries!
Ever had your players get stuck because they don’t know what to do next? The new rules provide a mechanism for handling such tricky situations; a revision of the Idea Roll rule. Now you can throw tricky investigations at your players and not have to worry if they pick up every clue or not. The new Idea Roll helps to keep your game on track without unnecessary railroading of the players.

Sanity
The sanity track remains, however the Keeper is provided with new guidance on how to deal with episodes of insanity, including phobias, manias and delusions. Plus the Keeper is provided with advice on how to tamper with the investigator’s backstory — potentially corrupting their relationships, their possessions and other important aspects of their life as they sink further and further in to the cosmic abyss of the Cthulhu Mythos.

Combat
Sometimes your investigator will have to rely on his or her fists! All unarmed attacks now come under the one skill of Brawl, allowing you to describe your attacks as befits the situation. Weapons and firearms retain their own skill categories. Combat now works with opposed rolls, allowing you to resolve combat scenes faster than ever before and avoid drawn-out „miss – miss“ situations, whilst giving players more options on the things they can do during a fight. Fast paced and exciting combat!

Combat maneuvers replace the old grapple rules. Now you just describe what you want to do and roll versus your opponent — allowing greater freedom to create exciting fight scenes. Your investigator can do more during combat than just fight or flee!

Chases
An entirely new chase system that allows you to combine vehicles, monsters and pedestrians in exciting chase scenes. Remember the chase scene in Lovecraft’s ‚The Shadow Over Innsmouth‘ wherein the protagonist, Robert Olmstead, flees the Gilman House hotel via a window and is pursued across Innsmouth by deep ones? These new rules enable you to stage exciting chases like that in your game.

Monsters
You’ll find a host of old favourites here, along with a few new faces, as well as insightful marginalia providing details, notes and ideas on many of the monsters and gods therein.

Spells and Tomes
7th Edition provides revised rules for how to handle magic in your game and also revisits tome reading times, as well as providing advice and ideas on how to use tomes in your scenarios and games. If your investigator has never cast a spell before you may find you get more than you bargained for! Likewise, insane ancient Mythos wizards and monsters have access to deeper realms of magic and a range of spells have suggested effects for just this type of insane casting.

New scenarios
„The Haunting“ — the old faithful scenario is back, with added, step by step Keeper’s advice for new players. Plus two new scenarios: „Amidst the Ancient Trees“ and „Crimson Letters“, designed for both new and veteran Keepers. „Crimson Letters“, set in witch-haunted Arkham, provides the ideal starting point for a campaign.

Anything else? The entire rulebook has been revised, edited and will be presented in a brand new layout with loads of cool new artwork.“
– Call of Cthulhu 7th Edition product description