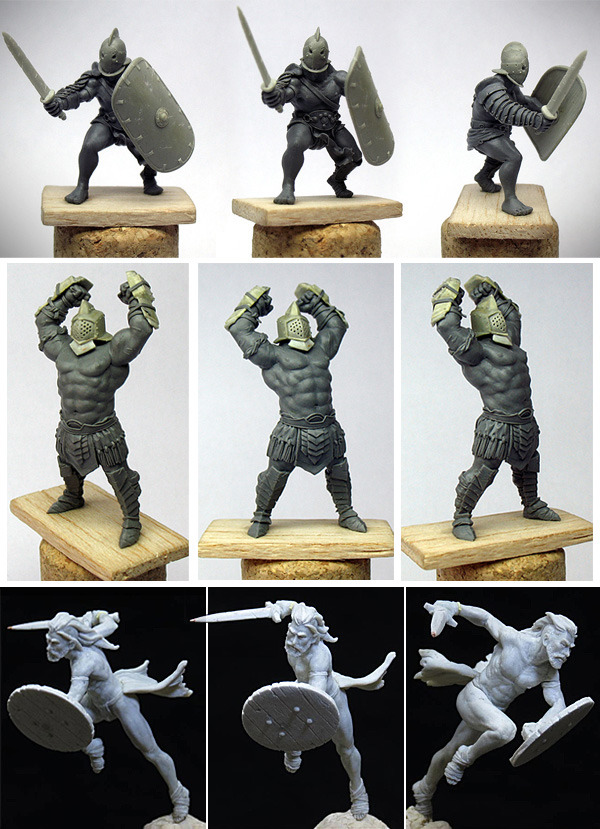 „Gladiator miniatures and an arena skirmish game in a world where history, myth, and legend intersect.

Arena Rex is a line of high-quality, 35mm resin miniatures and an engaging skirmish game for 2 or more players. The world of Arena Rex is historically inspired, mythic in scope and legendary in proportion. Join us in bringing that world to life.

The miniatures we are creating are the heart of Arena Rex. At its core, this project is a way to get a line of exceptional gladiator miniatures out into the world. Every Arena Rex mini is a work of art, handmade by extraordinarily skilled artisans. We have some of the best sculptors in the world working on our models, and we put in a lot of effort to make sure they have what they need to capture the character of each piece. We then cast the sculpts in resin for a high-fidelity replica of the original.

Resin is the perfect medium for painters and collectors alike. Painters will love the detail captured on the models, and everyone else will appreciate how stunning our resin is in its natural state.

Currently, we have several minis on sculptors‘ tables. We’ll share them as they are completed. The purpose of this campaign is to fund the expansion of our miniatures line before the game launches.

Character poses in concept art may be altered when they are translated from 2D to 3D.

Arena Rex is not affiliated with the other games or miniature lines listed above. Their models only appear here as a demonstration of scale. Aquila is on a 30mm base.

If the miniatures are the heart that drives Arena Rex, our game system is the body, giving them added structure and purpose. With streamlined and innovative mechanics, Arena Rex is surprisingly simple to pick up and play, but still provides meaningful choices and is a lot of fun. The game’s mechanics have been completed and polished. Right now we are completing final balancing of our individual gladiators. The summer playtest will allow backers at the Ludus level and higher to preview the full version of the game and provide feedback on clarity of rules text and any final rule tweaks.

A skirmish-style game with a low model count is a natural fit for gladiatorial arenas. It also allows us to work in more interesting characters and mechanics without worrying about game play becoming too unwieldy. It’s easy to get into Arena Rex — three models per side is an excellent a starting point.

The world and setting are the soul of Arena Rex: those things which give it character and identity. The rumor and superstition that are pervasive through accounts of the ancient world have been writ large in Arena Rex, and a keen sense of wonder is a key element that we wanted to include in the world. Inspired by the most exciting eras of antiquity, we have taken some anachronistic liberties and changed some key historical points to create a world that is both familiar and incredible.

The Roman Republic endures on the shores of the Mediterranean, while across the Alps, the Gallo-Roman Empire holds sway. The kingdom of Aegyptus is a tributary of the Roman Republic and ruled directly by an Antonian king and Ptolemaic queen. The Atlantic is not the barrier it once was, and men from the twilight lands of the north and natives of the far west join in commerce and warfare. The year is 1253 AUC and this is not the world you know.“