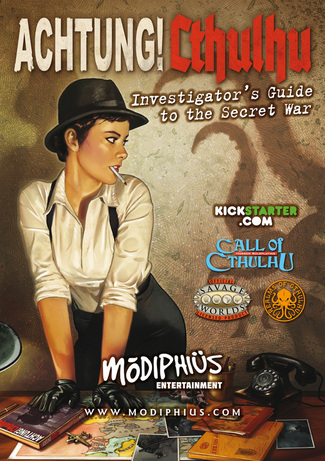 Achtung! Cthulhu – The WW2 Keeper’s & Investigator’s Guides, everybody is talking about this Kickstarter, currently. Well, maybe not everybody but many roleplayers and Call of Cthulhu fans are interested in this World War II and Lovecraft inspired Mythos horror crossover.
While this Kickstarter has just begun, there is another game coming back. Modiphius Entertainment has also the rights for the new 3rd edition sci-fi, science fantasy Mutant Chronicles RPG.

Before the Achtung! Cthulhu – The WW2 Keeper’s & Investigator’s Guides Kickstarter I mailed a bit with the man behind (the enemies lines and) these projects, Chris Birch.

Here is our report from the front. Enjoy!

obskures.de: Hi Chris Birch, Please tell us about yourself and your gaming experiences.

Chris Birch: I grew up in the middle of England, and now live in London with my beautiful wife Rita. I remember the day I first decided to roll dice when playing soldiers with a childhood friend to see how many we could each knock down, around the age of 8 I got introduced to D&D by my brother and his girlfriend, aged 9 picked up Steve Jackson’s Ogre game and have been a wargamer/roleplayer and board gamer all my life. Recently I love Flames of War, Defenders of the Realm and Mystic Mice and developing our own RPG Expeditions based on cards 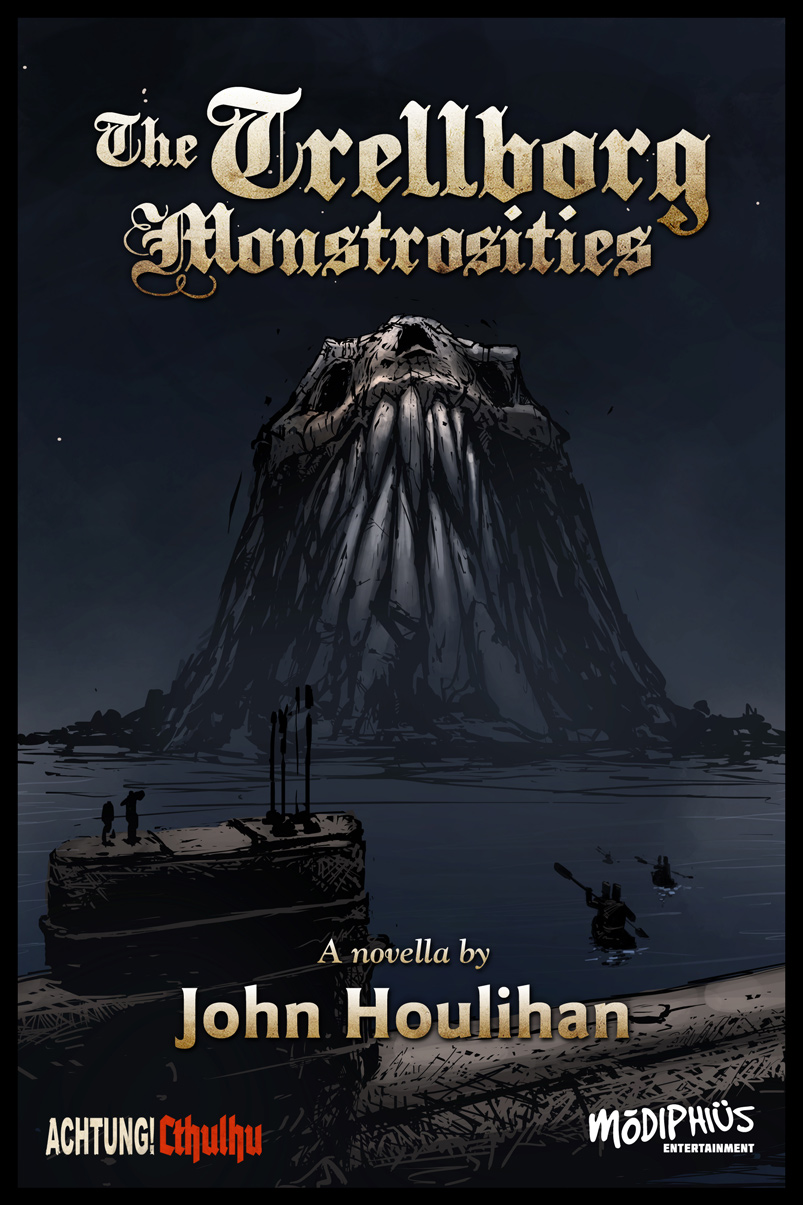 Chris Birch: This is the intro to Achtung! Cthulhu: „Discover the secret history of World War Two – stories of the amazing heroism in which stalwart men and women struggled to overthrow a nightmare alliance of science and the occult, of frightening inhuman conspiracies from the depths of time, and the unbelievable war machines which were the product of Nazi scientific genius – and how close we all came to a slithering end!“
It’s basically the ultimate Cthulhu mythos inspired wartime adventure, and the Investigator’s Guide and Keeper’s Guide are the complete reference guides with new rules, mystical plots, secret nazi war machines, amazing and terrifying missions and adventure, new skills, professions and much more. You can read a lot more on the Kickstarter page…

obskures.de: What are the most important inspirations to get the player(s) in the „right mood“?

Chris Birch: Perhaps some wartime radio excerpts in the background, there’s lots of great stuff on youtube, including music and message broadcasts by various leaders. But really if you have the right attitude, and a dangerous streak for leading the players by the edges of their lives through some awesome adventures then this is going to be THE Game for you. What Keeper or GM wouldn’t want to send his players parachuting in to a Mythos infested Berlin or hold the line against some terrible force hoping and praying for the allied scientists or priests to figure out how to turn the tide! 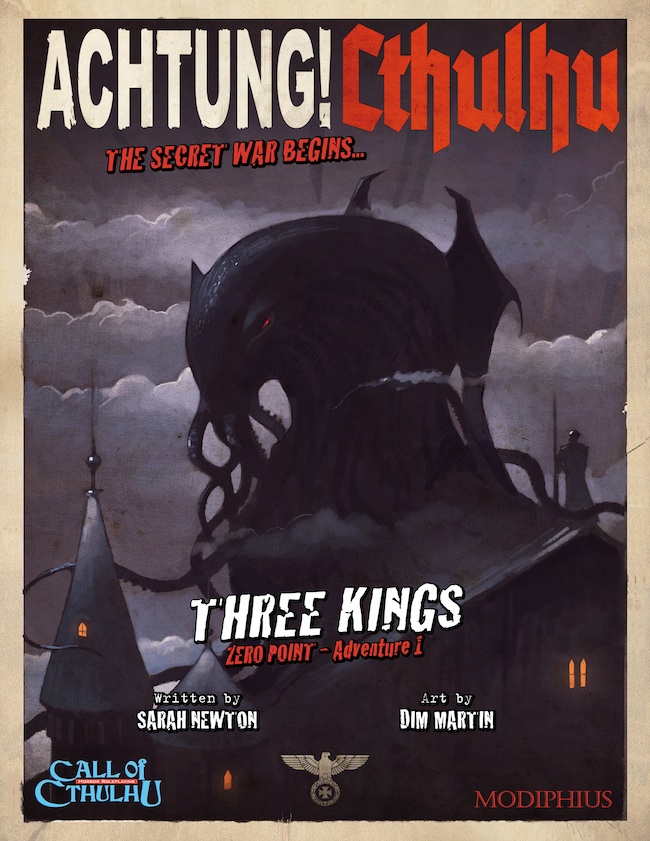 obskures.de: World War II is a interesting panorama for fighting H.P. Lovecrafts Mythos. There are already some World War inspired Cthulhu scenarios for Trail of Cthulhu.
What makes your visions of the Secret World War special?

Chris Birch: We have an overall plot in mind, a firm vision of what is Achtung! Cthulhu and what is just ‚weird war‘, we envision a whole line of campaigns leading the players up to a cataclysmic event and a massive sequel game that people are going to be blown away by, plus boardgames, miniatures, and maybe even a movie. We’re working hard on developing some key characters that ail re-appear throughout the product line so I think our fans are going to find themselves with so many exciting ways of experiencing the world of Achtung! Cthulhu.

obskures.de: What is in your opinion the best aspect or part of Achtung! Cthulhu and what do you think is a bit critical?

Chris Birch: I think it’s simple WW2 and Cthulhu but very much that it’s a strong vision and historically well researched. If I was to be critical it would be how slow we have been so far in bringing out our products so I hope we can speed up!

obskures.de: Which game systems do you support? If I recall correctly Trail of Cthulhu by Pelgrane Press is not on the list yet. Why? Any plans?

Chris Birch: Currently Call of Cthulhu and Savage Worlds and PDQ, we have a Trail of Cthulhu conversion in the works and are considering FATE Core. If things go very well with the Kickstarter we may even launch our own RPG System Expeditions which is a more a card based introductory system 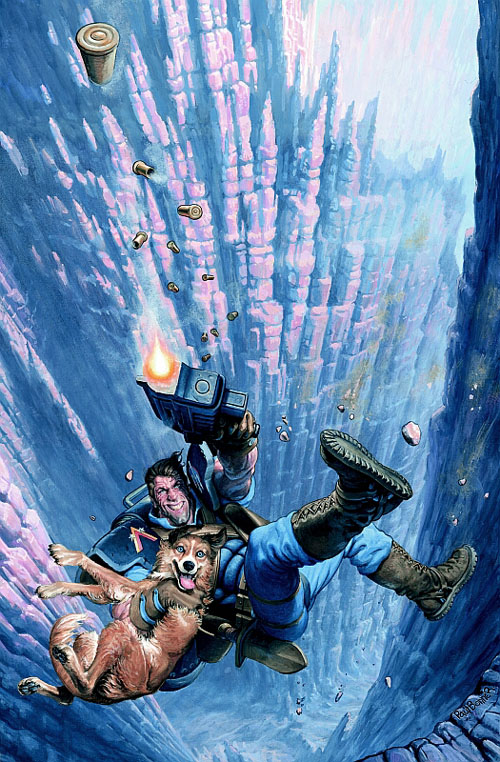 obskures.de: Okay, the current Achtung! Cthulhu Kickstarter is the reason for this interview, but over here in Germany many fans are waiting for the Mutant Chronicles 3rd Edition RPG. Please tell us a bit more.

Chris Birch: Mutant Chronicles the 3rd Edition is going to have it’s first release Winter 2013 – we hope this side of Christmas! We are considering both conversions to big systems as well as a re-write of the rules but this time to ensure that you can experience the real atmosphere of the Mutant Chronicles universe from the insane last stand battles and crazy action to the corporate politics and investigations of cults. We’re polishing the storyline to bring it up to date, adding somethings that were missing and giving the background story a lot more depth to make sense. We can’t wait to unveil it – I think old time fans will love what we have done and it will also attract new fans too. I love the diesel punk crazy style of the art and we’ll be keeping the best bits and introducing some new artists to fill in the gaps!

obskures.de: What happened to the Starblazers and the Legends of Anglerre FATE RPGs? What are your next projects? If you had to pick one, which should we watch closely?

Chris Birch: Both those games were part of Cubicle 7 and now I have my own company I’m moving on to new projects however we are releasing a sci-fi Fate supplement called Project Generations about life and adventures aboard colony or ‚generation‘ ships where things go horribly wrong, it will be compatible with Starblazer, Bulldogs AND Diaspora so something for everyone. Our next projects are of course Achtung! Cthulhu and Mutant Chronicles but I have a special place for a project called Of Dreams & Machines a post apocalyptic science romance with an anime twist that I hope to launch this summer using a hack of a popular new system. The artwork is simply beautiful!

obskures.de: New game companies nearly every day, crowdfunding (Kickstarter) everywhere and the tabletop RPG community is growing older and older.
Electronic tools on PC, tablets and smart phones are coming. What is you perspective on the changing market and community?

Chris Birch: Funnily enough I’m playing more iPad games, more board and rpg games and less Xbox. I think there’s only so much technology can do though that is unmatched by the imagination of a human being. Table top tools may help a gm but there’s nothing like really rolling those dice and not looking at numbers on bits of paper but being transported in to this stunning world by your GM. I want to make it easier for GM’s and apps may help with training, resources and other ideas that simplify there job. 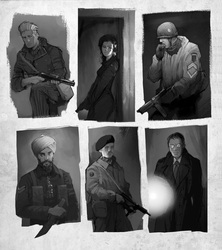 Chris Birch: Role playing is about bringing people together to share something better than a movie.

obskures.de: Your favorite Great Old One?

Chris Birch: I’m currently fascinated by the old ones and their city in Antartica from the Mountains of Madness – just think what would happen if there Nazi’s found that city….wait, what did you say!!!!

Chris Birch: I love being the Gamesmaster as I love creating worlds for people to play in, I love seeing them enjoy the experience.

Chris Birch: Some food, some drinks, some friends, happy times! Really the rules don’t matter so much as long as the players feel like things have a consequence and the GM can weave a good story.

Chris Birch: Just do it, seriously don’t think about it too long, get off your ass and write a game, it might be crap, but you can write another and another and eventually you’ll get better. Don’t be afraid of people telling you it’s crap, it’s all a learning process, swallow your pride and get on with it!

obskures.de: What was the first role playing game you bought?

Chris Birch: It was Star Frontiers – I loved the basic set with all the maps and counters and awesome Star Wars style aliens and heroes! 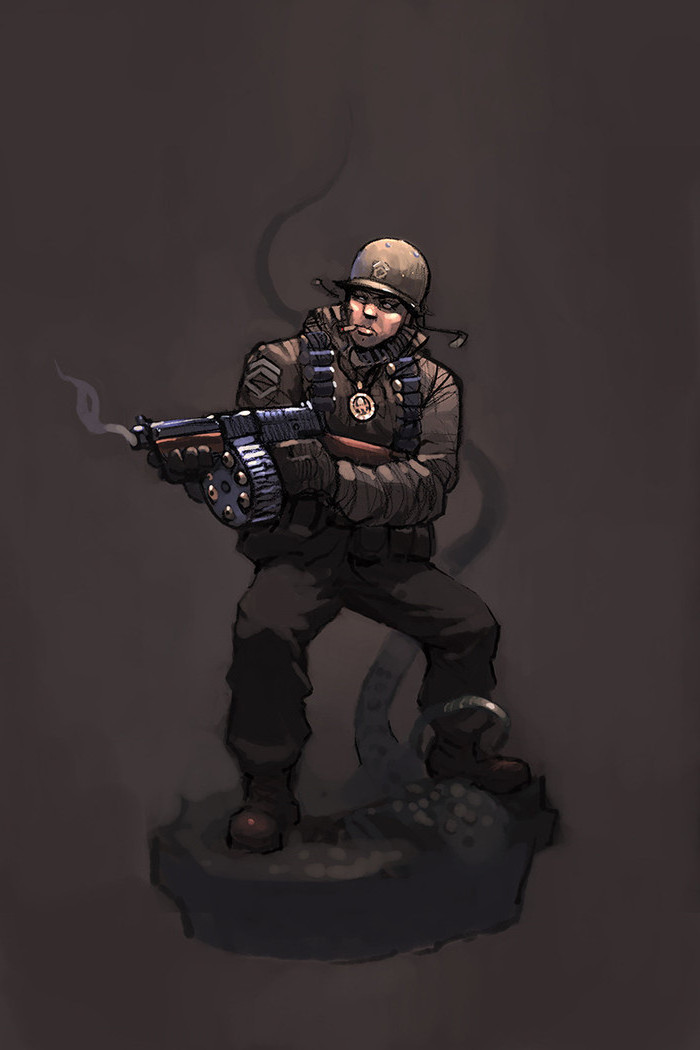 Chris Birch: I loved Everway I thought it was such a unique and dangerously different idea, PDQ on the other hand is such a simply RPG I have taught two girls to create characters on a napkin in a bar whilst holding a wine glass!

obskures.de: What is your favorite game (video, board, etc.) of all time and in recent years?

Chris Birch: My favourite game of all time has to be D&D basic, it was so simple, rocked the world and wasn’t bothered with creating rules for everything. In recent years I love the Apocalypse World system by Vincent Baker which introduces roleplaying in a different and wholly unique way to people

Chris Birch: I love the boardgames of Richard Borg (Battlelore for example).

obskures.de: Thank you, Chris Birch. Anything else you want to share with the fans?

Chris Birch: Thanks for reading this, please sign up on our site for special discounts and promotions for all our games www.modiphius.com.

The world needs you! Join the good cause and fight the Elder Gods during World War II: Achtung! Cthulhu – The WW2 Keeper’s & Investigator’s Guides

Images: All images by Modiphius Entertainment