„Werewolf the Apocalypse“: „Rage On …“

“Werewolf: The Apocalypse 20th Anniversary Edition Deluxe”: Only a few days left until the Kickstarter funding by Rich Thomas ends for the relaunch of this roleplaying game classic. He is also creative director of the new company The Onyx Path. They have currently the rights to publish pen and paper roleplaying games for the classic and new World of Darknes, Exalted, Trinity and Scion lines.

Before we start with the interview, please note I am not a native speaker. This is my very first English interview. Please excuse my poor English language. Thank you. Let us start now.

obskures.de: Hello Rich Thomas! Please introduce yourself a bit. What happened to White Wolf/CCP? Please let us know more about your new Company The Onyx Path.
Rich Thomas: Hello! I’m Rich Thomas (richt on the forums, etc) and I’ve been working with the White Wolf game lines since before we launched Vampire the Masquerade. For many years I was in charge of all of the visuals and the production end of WW books, and then I became Creative Director a year or so before we merged with CCP- the Icelandic MMO company. After the merger, CCP tried everything they could to be both an MMO company and allow WW to continue to publish paper RPGs, but the two types of businesses just didn’t mesh well. Finally, almost exactly a year ago, CCP agreed to license cWoD, nWoD and Exalted to my new company, Onyx Path Publishing, with the hope that I could give the WW game lines the focused attention they deserve. Onyx Path is a very small company in comparison to WW during it’s height, but I am lucky to have access to creative folks around the world who have decades of experience creating WW RPGs- guys like Justin Achilli, who is developing the V20 line, Ethan Skemp and Bill Bridges, who co-developed W20, Geoff Grabowski, John Morke, and Holden Shearer, who are working on the new 3rd Edition for Exalted- the list goes on. These are creators who I was fortunate to have worked with during our WW days and who have a lot of love for tabletop RPGs.

obskures.de: Do you still have the time to play RPGs? Please tell us something about your own gaming experiences.
Richard Thomas: Hah! RPGs- of course our WW games, all versions of D&D, Pathfinder, most every RPG until the late nineties and then I got both busy and selective- and had lots of kids- so played more Blizzard comp. games and a variety of FPShooters. In the past year I was in a V20 Chronicle run by Eddy Webb and an old school d20 game and then a Pathfinder game DM’d by Justin. All over Skype or Goggle, so that’s pretty interesting.

obskures.de: The Kickstarter for „Deluxe Werewolf the Apocalypse 20th Anniversary Edition“ is a huge success. The funding goal has been reached within hours. I think this Kickstarter is even more successful than your „Vampire: The Masquerade“ relaunch. What makes this „Werewolf the Apocalypse“ edition so special?
Rich Thomas: I don’t know that we can really compare the two events. The V20 relaunch of classic Vampire the Masquerade was a phenomenon that had a big marketing push that included the Grand Masquerade in New Orleans and was pretty much a pre-order event. Kickstarters, and in particular the W20 Kickstarter, start off much more as a community-driven drive to create a product- in our case the Deluxe Edition of W20. How folks pledge to enable us to reach our goals can help create an entire game-line in and of the Kickstarter itself. For example, once we had achieved the initial funding goal in 11 hours, I started putting out “stretch goals”, dollar amount goals that if reached will result in a new product being created, or an upgrade to the book, or just something fun given out to backers. So far, and we’re still going, I’ve added two new Werewolf novels (by Bill Bridges and Mike Lee), the When Will You Rage 2 fiction anthology, a W20 Storytellers Screen, a W20 Dice Rolling App, a PDF copy of The Skinner, the W20 adventure Ethan Skemp is writing, a Making of the Art of W20 PDF, and added extra bookmarks to the book itself. These were all things we could only add to the original project because of the wonderful support of the backers- all of whom are Raging Garou!

obskures.de: Following your announcements on your homepage you plan further Kickstarters. What will be the next ones? Anything special planned? After the Kickstarter releases your books are only available as a print on demand via drivethruRPG.com. I never saw them in any other store over here in Germany. I do not know how you handle this in the US. Do you have any plans to better support other retailers?
Rich Thomas: So really two topics here, let me hit each one separately. First, yes we’re planning on additional Kickstarters- we’re looking at a Kickstarter for Mummy the Curse, the nWoD reimagining of the classic Mummy stories developed by Colin Suleiman and an all-star cast of writing talent in November. For V20, we’ll be Kickstarting Deluxe Hunters Hunter 2, a look at updating for V20 the classic Hunters book that started it all. As always guided by the master of the Kindred, Justin Achilli- which should be in December. And next year we’ll have a Kickstarter for Exalted 3rd Edition, which promises to be insane, and the Deluxe W20 Changing Breeds book being developed by Stew Wilson.

Second, we have been moving out of publishing WW game books into the traditional distribution system for just years- that system is broken, IMHO- and have been partnered with DriveThruRPG in order to allow our fans to get their WW material directly on-line. PDFs for the many gamers who now prefer to read tablets, and Print On Demand physical books for folks who want to have a paper game book still. DTRPG makes it as easy to order as Amazon and can ship PoDs anywhere in the world. I’d like to see retailers get involved with what we’re doing if we can find a way to work together to everyone’s benefit- nothing like a great game store to show why it’s fun to roleplay- and with there being fewer and fewer left, I’d like to help. 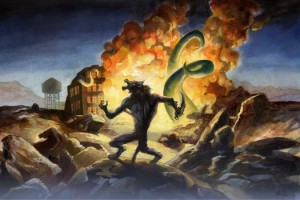 „Werewolf the Apocalypse“: „Allies Below“

obskures.de: Please tell us about your future plans. Can you say something about your Cavaliers of Mars project. The quickstart rules are already available via drivethruRPG.com. What is this game about? Do you have any release plans or other interesting projects in the pipeline?
Rich Thomas: Cavaliers of Mars is Vampire the Requiem developer Russell Bailey’s swashbuckling adventure game set on Mars. As he pitched it to me: “If Mars has canals, it must have a Venice”. Very strongly influenced by Howard and Vance, and just one of those projects that I always wanted to create and publish during my time with WW but couldn’t justify. Now, with Onyx Path, Cavaliers is an example of the kind of joint creator-owned projects that I’d like to do more of. Also, before I left WW/CCP, I purchased both Scion and the Trinity Universe of games so Onyx Path will be publishing new material for those lines including new improved editions. Probably nothing substantial until late 2013 or into 2014, though.

obskures.de: Thank you for the interview. Anything else you want to share with the fans?
Rich Thomas: Thanks so much for being fans for all these years. WW has had its ups and downs, but in the end you folks are the ones who have kept our amazing worlds alive. My fervent wish, and what I’m driving towards, is that you’ll walk with us down this Onyx Path towards a “Renaissance in WW Gaming” (for those truly old school fans who get the reference) that we’ll be talking about 20 years from now.

Finally, I would like to thank Rich Thomas for his encouragement to do my first English interview and the really good cooperation. Go support the “Werewolf: The Apocalypse 20th Anniversary Edition Deluxe“-Kickstarter! RAWR …