“Hillfolk: DramaSystem roleplaying by Robin D. Laws”: The Kickstarter funding by Robin D. Laws for his newest creation ends within in a few days. I asked him yesterday and here are his lightning-fast answers.
Please note I am still not a native speaker. So, please excuse my poor English language. Thank you.

obskures.de: Hello, Robin D. Laws! I think most members of the roleplaying community already know you. You worked among other things on mainstream roleplaying game titles like Dungeons & Dragons, Pathfinder, the amazing Feng Shui and a lot of „indie“ games like Hero Wars, Esoterrorists (GUMSHOE System) and now Hillfolk. Furthermore you wrote Novels like The Worldwound Gambit (Pathfinder) and helpful gamer stuff like Robin’s Laws of Good Gamemastering or Hamlet’s Hit Points. Anyway, please introduce yourself a bit and tell us about your gaming experiences. Do you still have time to play other games, you are not involved? Any favorites?
Robin D. Laws: I’ve been gaming since I was a teenager and have been writing games and fiction since the early 90s.
I run a game every Thursday night as I have throughout my career–you can’t design good roleplaying games unless constantly reminded of the play experience and how it differs from other narrative forms. Though we always have a lot of fun, the choice of game always ties into what I’m working on at the moment. This may be a game of my design, or one I’m writing supplemental material for.
For DramaSystem we ran two „seasons“ of Hillfolk and a season of Greasepaint, a 1930s traveling carnival series with supernatural weirdness going on in the background. Right now we’re in the middle of a test campaign for Dreamhounds of Paris, an upcoming Trail of Cthulhu campaign in which you play the major figures of the surrealist movement in 20s or 30s Paris, after you discover your newfound ability to directly manipulate the people, locations and events of the Dreamlands. The players have chosen as their PCs Salvador Dali, Man Ray, Luis Bunuel and Rene Magritte. Sadly Marcel Duchamp’s player had to drop out. Magritte has now arranged for the transport of an alluring fist-sized gem from the dreamlands to Paris, as suggested by Nyarlathotep and assisted by the ghoul guardian of the Paris catacombs, Nicolas Flamel. Man Ray has misgivings about this, while Dali and Bunuel are preoccupied by their deteriorating creative relationship and the former’s new love, Gala. 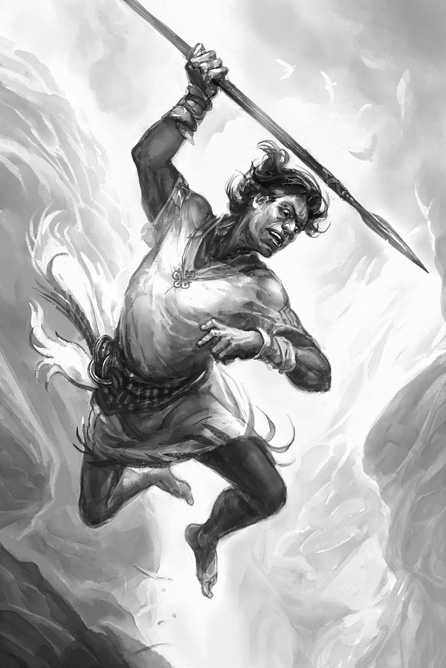 obskures.de: To be honest, I did not think your new project Hillfolk would be such a success. Congratulation! Based on your gamer stuff like Hamlet’s Hit Points I think you have strong analysis skills. What do you think are the reasons for this unexpected success? Neither the story of iron age clans and conflicts nor the new drama oriented game system seem at first very promising.
I support your Hillfolk Kickstarter, because I like a lot of your other game books. I always get alternate view points and inspirations. Did you expect this reception by the community? What makes Hillfolk in your opinion so special? Your popularity?
Robin D. Laws: The Kickstarter has certainly outperformed my own expectations many times over–and Pelgrane publisher Simon Rogers‘ somewhat higher projections, too. What I’ve discovered about crowdfunding, among its many other advantages, is that it can speed up the process of reception for a new game idea. Hillfolk and DramaSystem meet a demand people don’t know they have yet. I created them expecting a slow, gradual reception, as GUMSHOE got–where it met initial resistance and then clicked with people a couple of years later.
Hillfolk deprives gamers of the fantastical elements they crave in order to better teach the DramaSystem structure. Once people play it, they see why and how it works. Having undergone that conversion experience they’re equipped to play a dramatic game with more overtly geeky tropes.
Crucial to our success has been the process of sending out fully playable preview copies of the game right away, so gamers and reviewers can get excited about it while the campaign is still on and others are able to jump in. The excitement crowdfunding generates helps with this too, focusing lots of attention on this one game for the month of the campaign. I did feel that I had enough of a track record that people would at least entertain what I was doing, even if it generated some cognitive dissonance at first. A game that doesn’t make you feel weird when you first encounter it isn’t really moving the art of RPG design forward–it’s giving you what you already know you want. Not that there’s anything wrong with that.

obskures.de: You plan to release the DramaSystem and Gumshoe under an open gaming license. Can you tell us more about this plan and what do you expect?
Robin D. Laws: I’m hoping to see the games used both by fans and by commercial publishers and I am now consulting backers to see what they want from the license. Both OGL and CC approaches have their pros and cons, and I’m hoping for a solution that gets us the best of both worlds. To join that discussion, head over to this blog entry and leave a comment. The process of putting the DramaSystem SRD together will be easier than GUMSHOE. With so much added to Hillfolk timing is unclear but I’m hoping the SRD will be available shortly after the book publishes. GUMSHOE will take a little while longer, I’m guessing.

obskures.de: You work on popular game lines like Dungeons & Dragons or Pathfinder and on the other side of the industry. You also develop comparatively small or indie games like Hero Wars, Ashen Stars or Hillfolk. What is the difference between the working methods? Do you have more creative control over titles like Hillfolk? Is this one of your motives to do such games?
Robin D. Laws: I feel lucky to get to hop back and forth between the bigger games, where my work becomes raw material for the line developer’s final product, and projects like I do for companies Pelgrane, which grants me wide creative latitude. Simon has valuable input on any game I make for him, but has learned over the years that the weird new item I deliver to him might have something to it. That’s why he attracts and keeps top talent like Kenneth Hite–he hires good people and trusts them. That, and the lavish dinners.

obskures.de: The GUMSHOE system is basically pretty simple, but it seems every new game in the product line includes more complexity and crunchy bits. The otherwise excellent new vampire hunter roleplaying game Night’s Black Agents by Ken Hite is a good example for this direction (e.g. thriller chase rules or the new special combat tactics). What do you think about this development? Are there any streamlining or major rules changes for e.g. Esoterrorists 2nd Edition planned?
Robin D. Laws: GUMSHOE is very modular so if you don’t like a crunchy bit you can safely pretend it was never published. The original Ashen Stars space combat rules, by yours truly, were too crunchy and had to be simplified to match the approach of the rest of the system. Eso 2 gathers later rules in one place, and adds the additional setting material gamers demanded, to make it a more typically formatted core book. It does streamline the combat initiative rules. Other than that it’s a new presentation rather than an incompatibly changed new version of the core game.

obskures.de: Can you tell us about your upcoming projects like Esoterrorists 2nd Edition or your involvement in the 13th Age project. Do you have any ideas for further Hillfolk supplements? Do you have any other games planned?
Robin D. Laws: I’m doing a chapter on devils, plus some commentary to go along with Rob and Jonathan’s commentary, for 13 True Ways, the first big 13th Age supplement. There’s another project in the concept stage that I shouldn’t spoil yet. But if you look at the Dying Earth line you might find the sourcebook that will serve as the model for it.
As far as new games go, I’m going to let DramaSystem develop for a while before thinking about yet another change in direction. Blood on the Snow, the DramaSystem Companion that has grown out of the Hillfolk Kickstarter, will take up a good chunk of my immediate time. I can’t wait to see the Series Pitches from the many and various top talents we’ve enlisted both for the core and sourcebooks. And to hear from players as to what they want to see in it–including their own submissions to the Master Class chapter.

obskures.de: Thank you for the interview. Finally. anything else you want to share with the fans?
Robin D. Laws: If you haven’t already, be sure to check out the new podcast I co-host with frequent collaborator Kenneth Hite, Ken and Robin Talk About Stuff.
Most of all, though, I’d like to express my enormous gratitude for their support, especially in making the Hillfolk project steadily more impressive throughout the campaign, and for embracing the DramaSystem so quickly.

Support “Hillfolk: DramaSystem roleplaying by Robin D. Laws” if you are looking for some thought-provoking roleplaying games. I did …