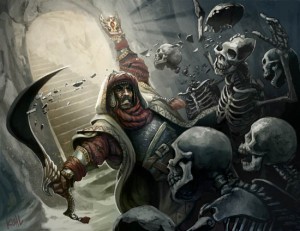 „Hellfrost Land of Fire“: Some undead

Savage Worlds seems to be really popular. I am not a total savage. Nevertheless I thought it is time to get an insider perspective about this part of the hobby market. So I asked Paul „Wiggy“ Wade-Williams – the lead author at Triple Ace Games to answer some questions about their new savage Hellfrost Land of Fire – Arabian Nights RPG Fantasy Setting Kickstarter. He was also kind enough to share his insights beyond Wildcards, Extras and Bennies.

obskures.de: Welcome Paul „Wiggy“ Wade-Williams! Please tell us a bit about yourself, your gaming experiences and the company Triple Ace Games.
Wiggy: I’m middle-aged, married, and live in the Shetland Islands. I’ve been gaming since 1982, and working in the industry since 1997, first as a freelancer, then as a full-time writer, and more recently as creative director and lead author at TAG. Years ago I used to game three times a week, but these days that’s down to just Monday nights and the occasional evening with the wife. There are a lot of great games out there, both new and old, and whenever we switch GM, we move
to a new system or setting. Right now, I’m running Pendragon for my group (which none of them had previously played) and Doctor Who: Adventures in Time and Space for the wife.

Triple Ace Games was founded in 2008 by three British gamers—myself, Robin Elliott, and Dave Blewer. In the last four years we’ve supported both Savage Worlds and Ubiquity, and worked hard to produce something like 200 products across a variety of different settings. 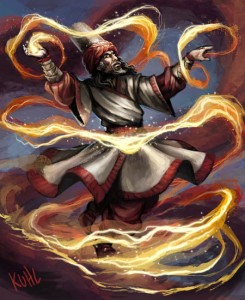 obskures.de: What fascinates you about the tabletop RPG hobby? What’s your favourite game? Anything else beside Savage Worlds and the Ubiquity system?
Wiggy: Several things fascinate me about RPGs. First, there’s the near-endless variety of systems and settings out there. I can investigate grisly murders one week, leap from a burning zeppelin the next, and battle orcs after that! Coupled with that is the endless hours of enjoyment I can have for a relatively small monetary outlay. Not many hobbies can boast that. That it’s a social activity is
important to me personally. While I could sit behind a computer and play with likeminded gamers on the other side of the planet, there’s nothing quite like sitting around a table with friends and engaging in one of mankind’s oldest pastimes–storytelling.

Wow, having to pick one favorite game is really tricky—I’ve played so many great games over the years. I guess the one I keep returning to is Squadron UK (formerly Golden Heroes). It’s a British superhero game, and it’s been a favorite of mine since it was released in 1984.
I own several other superhero RPGs, but none have yet managed to dislodge Squadron UK at my table.

Although we do play Savage Worlds and Ubiquity, there are still a lot of other games I’d like to run for my group. The only problem we have is a lack of time. Maybe when we’re all retired we’ll have  chance.

obskures.de: I think your original Savage Worlds Hellfrost setting is at least based on the number of publications your biggest success. The Hellfrost Land of Fire – Arabian Nights RPG Fantasy Setting moves the focus from icy northern and viking fantasy motives to hot Arabian tales of 1001 Nights. What are the reasons to move on to such a different background? Did you „completely“ explore the cold Hellfrost setting itself?  Will you give the players a bridge between the two
settings – for example an adventure like the 13th Warrior movie just in the opposite direction? Are you inspired by „Al-Qadim“ (a Dungeons & Dragons setting) or the board game „Tales of the Arabian Nights“? What makes your Arabian interpretation special or unique?
Wiggy: Hellfrost was never intended to be just the frozen north. Two other lands were mentioned in the Hellfrost Gazetteer, and if the setting proved popular enough, we always intended to explore these lands and others. Land of Fire was chosen as the first major expansion for two reasons. First, it shares a land border with the north, so it’s relatively easy to reach. Second, it allows us to explore how the lengthening winter is affecting a land once known for its oppressive
heat. I don’t think the north will ever be fully explored, but after a million words, it’s time to expand the horizon. 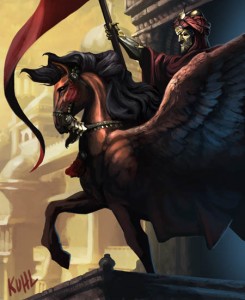 „Hellfrost Land of Fire“: A horseman

The first adventure won’t be a bridge. While we expect players to want to use their existing characters in a different landscape, we’d also want them to fully embrace the desert cultures, rather than just be visitors. Gamers with no real interest in the north also wouldn’t be able to use such an adventure. However, a bridge story is likely something we’ll do in the future.

The main inspiration came from reading the Arabian Nights, and watching Sinbad movies as a kid. I also used to study Egyptology at evening class, so that’s been important for inspiration. I have read Al-Qadim, but I started buying the boxed sets after the core of Land of Fire was written.

I hope what makes Land of Fire special is that we haven’t just picked up an Arabian Nights-style setting and dropped it into the Hellfrost world without thought. While it is a different place to the north, it shares many of its problems, tying the two lands together under the same Hellfrost umbrella. Like the north, it has its share of mysteries. The overthrow of the jinn, who once ruled much of the central and southern desert, occurred around a generation before the Blizzard War that ravaged the north and brought about the Hellfrost. Can two major events occurring at around the same time might be just a coincidence?

obskures.de: Some Savage Worlds fans criticized that the Hellfrost setting is not a self-contained Plot Point Campaign. But it seems that this decision was the right one for this line. However did you learn something in the process and will you change anything for the Hellfrost Land of Fire setting. For the Necropolis 2350 and Sundered Skies Plot Point Campaigns you released also some supplements. Did they fail to come up to your expectations?
Wiggy: For every fan who criticized the lack of a Plot Point, there are many more who prefer the openness of Hellfrost, and the freedom it gives them to tell stories from their own imagination. To that end, Land of Fire will follow the same model. With Necropolis 2350 and Sundered Skies, we discovered that many fans weren’t interested in supplements or standalone adventures. They had a Plot Point, and they were happy with that. We’re a small company, and supporting lines that aren’t holding their own against others makes no business sense.

obskures.de: What are your plans to support the Hellfrost Land of Fire – Arabian Nights RPG Fantasy Setting? Can we expect appropriate Realm Guides and adventures?
Wiggy: Our plans are to support the setting as we did Hellfrost, with Realm Guides, full-length adventures, and an expansion. Although the gazetteer section contains everything you need to know about Land of Fire to play there for years, Realm Guides will provide extra details on each region. As before, they’re written so you can pick up the ones of interest to you and ignore those that aren’t. Similarly, while the book has loads of adventure seeds in the text, we’ll be producing full-length adventures as well.

obskures.de: Savage Worlds and the Ubiquity system support in my opinion different play styles. The first one is a bit more crunchy D&Dish with a lot of miniature combat encounters usually. I was
surprised that you licensed the role playing Ubiquity engine (based on the Hollow Earth Expedition RPG). The Savage Worlds community is presumably far larger and more visible active than the Ubiquity fans. Why did you do the All For One: Régime Diabolique RPG at first for the Ubiquity system and later for Savage Worlds?  Do you plan further conversions (Leagues of Adventure)? Are you satisfied with the reception of your Ubiquity games?
Wiggy: There were several reasons for going with Ubiquity for All for One, but primarily we felt the system was a better fit for the setting we envisioned. We’re really pleased with response we’ve had to our Ubiquity settings, and we look forward to producing other settings for it in the future. There are no plans to convert Leagues of Adventure to Savage Worlds.

obskures.de: The Onyx Path (World of Darkness, Exalted etc.) dropped the distribution of their games by normal brick and mortar hobby stores. Your games are also pretty hard to get over this business channel. What do you think about this part of the hobby, the industry and the future of tabletop games business?
Wiggy: We’ve had stores contact us in the past to complain that our preorders are bad for business, but when we ask whether they stock all our books the response is rarely positive. I fully understand that they’re businesses trying to make money, but so are we. Sadly, a lot of smaller press companies don’t seem to get shelf space these days. 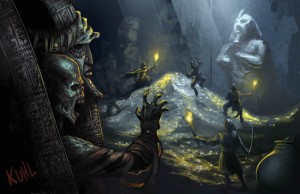 I read a blog just the other night from a retailer who has chosen not to stock anything from small or medium press companies funded using Kickstarter. I can see where he’s coming from, but Kickstarter, to us, isn’t a way to scoop as much money as we can and rob retailers of
their income—it’s a means of actually being able to fund full-color, hardback books that otherwise might never see the light of day.

The industry has gone through a lot of ups and downs in the past. The collectible card craze, electronic publishing, the d20 bubble bursting, MMORPGs—it has survived them all. Kickstarter is just another omen of gloom being cast about, as far as I can tell. Bricks and mortar stores may have to change their model as new technologies evolve (the same as conventional bookstores), but the industry of producing games will survive in one form or another as long as people want to tell and share stories.

obskures: Do you have anything else planned beside the Hellfrost Land of Fire – Arabian Nights RPG Fantasy Setting and the other already established product lines? Will you do more Hellfrost Realm Guides, printed collections and more stuff for my personal favorite of your games – the fine All For One: Régime Diabolique? Will you do Plot Point Campaigns again? What do you think about the idea of your own RPG system?
Wiggy: At the moment Land of Fire is our focus, but TAG will always have new ideas coming down the pipe. Hellfrost, in terms of the northern lands, is reaching the end of its continuously supported run, but there are a few print compendiums we’d like to do one day. The Ubiquity version of All for One has more adventures coming, but no planned major releases—the Savage Worlds version is a standalone book. Leagues of Adventure has a lot of support coming, and Kevin Anderson is busy writing more Daring Tales of the Sprawl material.

It’s very unlikely we’ll ever write a conventional Plot Point again, though there’s always a chance we’ll do a series of linked adventures that tell a story of epic scope.

We’ve looked at the possibility of producing our own RPG system, but we’ve made no firm decision either way. Something to look forward to in the years to come!

obskures.de: Thank you. Finally, anything else you want to share with the fans?
Wiggy: Thank you for taking the time to pose such tricky questions! I’d like to take this opportunity to say thank you to everyone who has enjoyed Hellfrost over the years and helped support it. If you’re interested in seeing the line grow further, or you’re interested in a fantasy desert setting, then please pledge to Hellfrost Land of Fire.